TIM O’BRIEN, correspondent: The Supreme Court is asked to consider thousands of appeals every year. The justices end up taking about one in a hundred, usually difficult cases that divide the lower courts. But few cases present the head-on collision of constitutional principles and other precious values as the case of Christian Legal Society v Leo Martinez. Martinez is the dean and acting chancellor of the Hastings College of the Law in San Francisco and the defendant in this case, after his law school refused to give official recognition to the Christian Legal Society, thereby denying it funding and any right of access to school facilities.

Headquartered at this office building outside Washington, DC, the Christian Legal Society is a national network of lawyers who are guided by their Christian faith. There are student chapters at law schools across the country. The chapter at Hastings opens its meetings to all students, but members are asked to sign the Christian Legal Society statement of faith: “Trusting in Jesus Christ as my Savior, I believe in: One God, eternally existent in three persons, Father, Son and Holy Spirit.” If you don’t sign the statement of faith, you cannot vote or hold office. 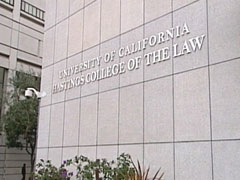 Members must also accept the society’s sexual morality standards, which state that any “sexually immoral lifestyle” is grounds for disqualification, including “all acts of sexual conduct outside of God’s design for marriage between one man and one woman.” That was enough for Dean Martinez to deny the Christian Legal Society official law school recognition.

LEO MARTINEZ (Dean and Acting Chancellor, Hastings College of the Law): We are a public institution. When we admit students, we tell them we will admit you regardless of your beliefs, regardless of your race, regardless of whether you’re striped or not, and I think part of our promise when they come here is that they are allowed to share in the full educational experience of Hastings, and I think it’s a terrible thing that we would have to do to say, “Yes, we will admit you. Oh, but by the way there are certain groups where you’re not welcome.” And to the extent we’re a public institution and we’re using public money to fund our student groups, I think we simply can’t do that.

O’BRIEN: To Martinez, it’s a simple case of discrimination, and the law school doesn’t have to support it.

GREG BAYLOR (Attorney, Christian Legal Society): This is not discrimination. This is about shared beliefs.

BAYLOR: It makes no sense for a public university to force the Republicans to have a Young Democrat as their leader. It makes no sense for the environmentalists’ group to be forced to have a lumberjack who’s out there cutting down trees to be the messenger for it. The Constitution is clear about this. It protects the rights of groups to come together to articulate their messages and to choose their messengers.

O’BRIEN: California, and especially San Francisco, where the law school is located, has shown great tolerance of the gay and lesbian lifestyle. The city was among the nation’s first to adopt an ordinance prohibiting discrimination based on sexual orientation. For the Christian Legal Society, to deny membership to students who are gay not only violates the law school policy, it may also violate local law.

(speaking to Greg Baylor): This is discrimination based on sexual orientation.

BAYLOR: It’s not discrimination based on sexual orientation.

BAYLOR: What Christian Legal Society cares about is a person’s belief in, and commitment to, its Christian ideals. Christians traditionally have believed that sexuality is reserved for the relationship of marriage between one man and one woman. It’s not discriminatory. Christian Legal Society allows all people to come in to participate in its meetings, to be there, to witness what happens. What we’re talking about here is the ability of a group to preserve its message, and it doesn’t make sense for a public university to say to a private student group you have to give up your Christian faith in order to get the same privileges that other groups have.

O’BRIEN: The teachings of the Christian faith dominate the meetings. At this meeting at a law school in Virginia, students brainstormed over whether their faith required them to adhere to a higher ethical standard than the profession itself requires. 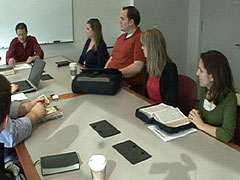 CHRISTIAN LEGAL SOCIETY STUDENT: In addition to being lawyers we’re Christians, and we have standards as Christians we want to live up to.

O’BRIEN: The signature activities of CLS chapters are weekly Bible studies, which in addition to discussion of the text usually include prayer and other forms of worship.

O’BRIEN: Would a student chapter of, say, B’nai B’rith, a Jewish Anti-Defamation League, have to admit Muslims?

MARTINEZ: The short answer is yes.

O’BRIEN: A black group would have to admit white supremacists?

O’BRIEN: Even if it means a black student organization is going to have to admit members of the Ku Klux Klan?

O’BRIEN: You can see where that might cause some consternation?

MARTINEZ: Well, there’s a Spanish saying to the effect that “the thinnest of tortillas still has two sides,” and the other side of that is that with any other regime we would be forced, using public money, to subsidize the discriminatory practices of a particular group.

O’BRIEN: This case reaches the Supreme Court at a time in the nation’s history when our society and our law are much more supportive of inclusion than they are of exclusion. Laws have sprung up in cities and states against discrimination that go far beyond anything the Constitution might require. Yet the First Amendment also guarantees freedom of association, a fundamental right to gather with whomever we choose and collectively express ourselves. The danger in this case is that it may be impossible for the Supreme Court to reconcile this dispute without compromising one of those cherished principles.