LUCKY SEVERSON, correspondent: If kids are any judge of character, Scott Neeson must be doing something right.

SOEMSO NOEUON: He is so kind. He help poor families and they can get a better life like me.

SEVERSON: Soemso Noeuon is one of about 500 kids whose lives have been made a whole lot better by the Cambodian Children’s Fund known as the CCF that Neeson founded seven years ago. It may be the best schooling in Cambodia.

SEVERSON: This is Ally Hoffman, one of Neeson’s volunteers. 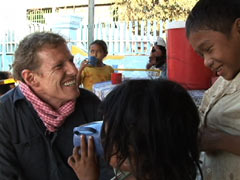 ALLY HOFFFMAN: I tell Scott that I can tell who’s been here longer because it’s almost like watching something flower.

SEVERSON: Hard to imagine that some of these sweet, clean faces are the same he found at the Phnom Penh garbage dump when he first arrived here 7 years ago. There were a thousand families existing in the rubble—kids scrounging barefoot through broken glass, jagged metal, and bubbling chemical waste hoping to earn 50 cents a day from scrap. Oaoknay Houy was one of them.

OAOKNAY HOUY: When I got money I give it to my uncles and aunt. I never have money to buy anything like food to eat. Some day I don’t have food to eat.

SCOTT NEESON: It just blew me away. It just was the most appalling situation I have ever seen, just the level of suffering and tragedy down there, the level of impoverishment and lack of any kind of human dignity. It was just—I couldn’t walk away. 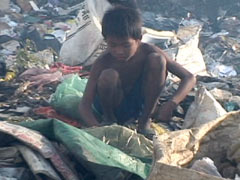 SEVERSON: He had been just passing through, a backpacking tourist, but within a year he had given up his very lucrative job as a president of a division of Sony Pictures, his multi-million-dollar home, his fancy cars, his yacht.

(speaking to Scott Neeson): You were a man of means.

NEESON: I was a man of means and luxuries, and yet I sort of enjoyed it but I wasn’t particularly happy.

SEVERSON: A year after he moved here, using his own money and contributions from friends, he opened a boarding school for 40 kids, many of whom had been abandoned by their parents. A couple of years later, enrollment had grown to 180. Now he has over 500 students in five schools, including a vocational school. Students here can learn crafts like sewing, design, hair styling, even baking. Several graduates have found jobs in local businesses. Patrick McKinley volunteered two years of his life at CCF.

PATRICK MCKINLEY: These kids want to do things themselves, and the price of getting it wrong for them is one they’ve already paid, and they see on the streets what’s waiting for them if they don’t get it right, so they work very hard.

SEVERSON: In the beginning it was all about education, but it wasn’t long before Neeson realized that a kid who is constantly sick or malnourished or lives in an abusive family is not going to be a good student. So CCF gradually expanded its mission to include outreach programs for the whole impoverished community that surrounds the dump.

SCOTT NEESON: She has a hole in her heart so she’s struggling to breathe, has got heart issues.

(Doctor speaking with patient): All right, look right at me, okay? 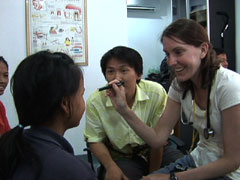 SEVERSON: Because so many people need medical care CCF built a clinic not just for the youngsters, but for their families.

NEESON: It’s possibly the only fully free medical clinic, I think, in the country that treats everyone, everything, regardless of age and disease.

SEVERSON: The doctors from Cambodia and around the world are all volunteers, like Kristin Schroeder, a pediatrician from Nebraska.

DR. KRISTIN SCHROEDER: Last year I was looking for a place to volunteer in Southeast Asia, and I wrote a letter to different nonprofit organizations, and Scott wrote me a letter back saying that, I think his exact words were, “I would crawl over broken glass to have a pediatrician come to CCF.” I can’t refuse that.

SEVERSON: The little girl getting a checkup—her name is Sien—was skin and bones a few years ago. Now she’s Neeson’s number one student, studying to become a doctor.

NEESON: I was at a wedding, and I felt something rustling at my feet under the table, and I thought it was a rat. I jumped in the air. It was Sien was under there collecting scrap food and the bottles, and that’s how we met.

CHANNOEURNH SOK (Scott Neeson’s Assistant): Scott really wants to help all the children that he sees, yes, and he hopes to help all of them. He will save the world if he can.

NEESON (with sack over his shoulder): Delivered to the door.

SEVERSON: Today he’s the delivery man, dropping off free rice to families who might earn $500 a year if they’re lucky. Here he’s handing out care packages for newborns, and for mothers who have no money to pay for a babysitter while they work CCF opened a day care school, and for those who need help with their babies, a free nursery. 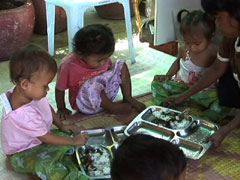 NEESON: These kids are feral. They don’t have a place to stay, so we bring them in and feed them.

SEVERSON: The CCF program is filled to capacity. Neeson cannot take in any more children. But these kids are hungry, so every afternoon he opens the gates, and they stream in for a hot meal, a pair of shoes, a shirt.

NEESON (handing out clothes): Ah, made in Cambodia.

SEVERSON: Because the classrooms at CCF are all full, Neeson has opened four satellite schools in impoverished neighborhoods.

NEESON: Because of the demand, we now have three to four sessions a day in every location. We’re having one on the other side. It filled up within 48 hours. Kids just want to study.

SEVERSON: Neeson says one reason he is so preoccupied with education is because he never graduated from high school himself.

NEESON: You know, I’m not a big believer in destiny, but it does seem like this is what I was meant to do. Everything I’ve done prior to now, whether it was working in business, in corporations. I grew up in a very working class area. I didn’t finish my own education. All those things have helped this come together.

SEVERSON: This is a CCF awards ceremony. Almost every child gets an award for something. After six years, Pou Dom is CCF’s first graduate, who’s now heading off to college with Neeson’s help.

POU DOM: I want to be a manager of a hotel.

SEVERSON: A manager of a hotel?

SEVERSON: Are you learning skills here?

POU DOM: Yes, my major is hospitality and tourism.

SOEMSO NOEUON: I want to be a manager, doctor, and teacher.

SEVERSON: Jim Gianpolus is chairman of Fox Filmed Entertainment. He sponsored a fundraiser for CCF. 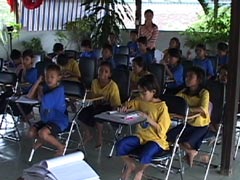 JIM GIANOPULOS: You know, we all want to change the world, and when we approach that effort and try and implement that desire, you know, you realize that it is very difficult to change the world. But what Scott has done is change a little piece of it and completely changed it for these kids.

NEESON: The premise of CCF, the actual concept was to take these children and really make them the catalyst for change. They’ve all got potential to be community leaders.

SEVERSON: And if Neeson has his way the change will reach far beyond Cambodia.

NEESON: The model here I believe works so well, every part of it is driven by quality, whether it’s education, the vocation training, nutritional. If I can get sustainability here I’d love to try the same in other countries. But it’s a matter of finances at the moment 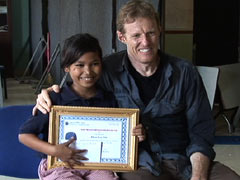 SEVERSON: At the awards ceremony Neeson was asked about his recent fund-raising trip to America.

NEESON: That was a tough question to answer.

SEVERSON: What did she ask?

NEESON: She asked if the US trip was a success.

NEESON: No. The finances are difficult here, and it’s become less about the work here and more about trying to ensure we have enough money to keep it all going.

SEVERSON: He says if the financial situation doesn’t improve he’s going to have to rein in some of his outreach programs, but swears that no matter what happens no kid will leave CCF without a good education, period, and that includes college.

NEESON (to student receiving award): Number one! I love that.