CHRISTI DEEGAN (speaking to marriage workshop): So one of the topics the church talks about is living together, cohabitating…

JUDY VALENTE, Correspondent: These young Catholic couples in Chicago are attending a marriage preparation workshop required by their church.

DEEGAN: And this is always such a hard topic to talk about, because the church teaches, you know, wait to have sex until you’re married, right?

VALENTE: Despite that teaching, half these couples may already be living together.

(speaking to Catholic couples): No guilt about your decision? 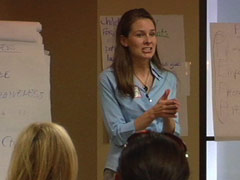 MAN: No, it never really came into play for me.

WOMAN: We’re both artists, we just don’t have—we can’t support ourselves on our own.

MAN: It’s important to get to know the person as well as you can before you get married.

WOMAN: The priest didn’t say anything bad. They didn’t ever say that we shouldn’t be living together. There was no condemnation.

VALENTE: Sex outside of marriage, divorce, homosexuality. For many Catholics, these no longer hold the stigma they once did. Catholics disagree with the church on a variety of other issues. The vast majority of Catholics say women should be priests, and according to a recent survey 58 percent said abortion should be a personal decision. The bishops keep talking about these issues, but fewer Catholics seem to be listening. What’s a pastor to say to the people in the pews?

REV. PATRICK LEE: It’s like being a parent to be a pastor. You never give up on your children, but you keep holding the ideal and explaining the ideal and hoping people will strive for it, but not condemning them when they fall short.

VALENTE: With so many Catholics going their own way these days, the role of pastor is perhaps more complicated than ever.

REV. LEE: When I was growing up, the church was the ideal we tried to change ourselves to match. Now people want to change the church.

VALENTE: Father Lee is the pastor of two parishes in Chicago. Most of his parishioners are highly educated, and they represent a diversity of views about church teaching.

REV. LEE: All authority is being questioned in our times. Some of it selfishly, some of it enlightened. I think Americans are more comfortable in an educated democracy now, and so they want to spread that democracy to the church, which has never really been a democratic organization. I think we have to be open to a dialogue of understanding what the church teaches and really hearing it and not dismissing it instantly. On the other hand, I think the church has to open itself to the wisdom of its laity.

JOE MURRAY: I’m a Eucharistic minister, and I’m a lector and an usher, when need be.

DENNIS KLUGE: I’ve been on the parish council for several years, but also I’m a lector, commentator, Eucharistic minister, and the lead bass in our church choir.

VALENTE: Joe Murray and Dennis Kluge have been a couple for 31 years. They are active members of Father Lee’s parish.

KLUGE: I think it’s important that Joe and I just approach it as we are just two guys coming to church and we’re just here to worship like everyone else, and we get involved, people get to know us, and so we’ve never, at least personally I’ve never felt excluded.

MURRAY: Women probably have more of a reason to be angry at the church than we do, because we’re not allowed marry, but they’re not allowed to become priests. They’re told that because of their biology, that’s excluded for them.

VALENTE: As at many parishes, women in Father Lee’s congregation aren’t shy about expressing their disagreement, but they remain practicing Catholics nonetheless.

MARY ANN TRAUSCHT: I personally stay in the church because I believe the basic tenets that are taught, and what I disagree with are man-made laws, not what Jesus taught.

VALENTE: What about artificial birth control? Do you know women who’ve left over that?

KATHRYN CUNNINGHAM: Most of the women I know are doing what they need to do and not talking about it.

VALENTE: A good number of Father Lee’s parishioners are divorced and remarried. If they have not gotten their first marriage annulled, the church says they may no longer receive Communion. This is often ignored. 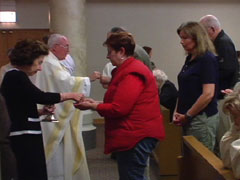 VALENTE: “Informed conscience” is something Catholics are increasingly citing as support for disregarding official teaching. It means, in essence, that one has studied church teaching, reflected on it, and concluded that the teaching can in good conscience be rejected.

REV. LEE: If you take exception to a church teaching, you better have a pretty good reason and not just “it’s because I want to do this.”

VALENTE: Reconciliation refers to the sacrament of forgiveness that used to be known as confession. Father Lee waits in the confessional every Saturday. Some days, no one comes.

(speaking to Rev. Lee): Do people know what sin is?

REV. LEE: I think they do. I think our whole being tells us when we’re being sinful. It’s unpleasant to deal with our own brokenness, and yet for those people who are brave enough to take that step, there is such healing in that sacrament that I can’t imagine my life without it.

VALENTE (speaking to Joe Murray): In your view, is it possible to be a faithful Catholic and yet disagree very strongly with some church teaching? 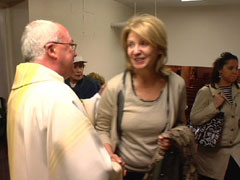 MURRAY: You can be faithful, and you can dissent. Dissent is challenge, and had we had more dissent, public dissent, we may not have had to have gone through what we’re going through in terms of the clergy sexual abuse.

VALENTE (speaking to Rev. Lee): Is this new round of scandal making it more difficult for you to be a pastor?

REV. LEE: It makes me feel ashamed. It makes me look at that clerical culture of secrecy and say this is unhealthy. It needs to be blown open.

VALENTE: Recent allegations about that culture of secrecy have rekindled outrage at the institutional church. But people make a distinction between the Vatican and their own parish.

KLUGE: That’s the big church. The little church is really where my heart is, alright?

MURRAY: You have to define what church is for us. The church is our parish, so our experience of church is through the parish.

REV. LEE: I think part of it is the strength and beauty of the Catholic culture. I don’t think it’s a religion like some religions. I think it’s in your bones.

It’s certainly an important role to be compassionate, to draw people in from wherever they are into a closer relationship with Christ, and so you don’t achieve that by throwing up barriers and saying you can’t belong, you’re excommunicated. That strikes me as not terribly Christ-like. I’m the shepherd. I have to get the strays and keep nipping at their heels to get them back into the flock, where they’ll be safe.

For Religion & Ethics Newsweekly, this is Judy Valente in Chicago.