BOB FAW, correspondent: Life is peaceful now for the Harshaw family since their eight-year-old adopted son Roman has been at a residential facility where he is being helped with his escalating violent behavior. Last year Roman tried to drown his sister, Grace, in their swimming pool. Another time, says his mother, Roman…

JULIE HARSHAW: …got mad because he wanted her to continue to play with him, and so he went over and found a two-by-four that was on the side of the yard and came up behind her and was going to hit her over the head to stop her from leaving. It would have killed her. I screamed at her to run, and Roman, you know, two minutes later didn’t even know what he had done.

FAW: The Harshaws adopted Roman from a Russian orphanage when he was 18 months old. They were told he was healthy, but as he got older Roman became hyperactive and aggressive. Eventually he was diagnosed with fetal alcohol syndrome, leaving him with the mental capacity of a three-year-old. 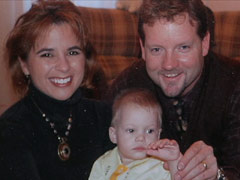 FAW: Roman has punched holes in walls, nor does he sleep much. To keep him from wandering off, the Harshaws had to install alarms on every door and window. Watching Roman, never knowing what might trigger an eruption, has exhausted this family.

CHIP HARSHAW: Over the last six years, you get worn down. Every day is incredible stress here, and not just for mom and dad but for everybody. We are in a terrible dilemma. We look at him as our son. You know, what would you do if it was your biological child, you know? Is it just because he’s adopted that these questions are posed? To us he’s our son, and we’re fighting for him.

DR. RONALD FEDERICI (Developmental Neuropsychologist): I’ve picked up children at the baggage carousel at airports. I’ve had them left in my office, in my office—they drove off. I’ve seen some horrific situations where parents, good people, totally lost it and wound up in prison for murdering their child. The amount of child abuse cases have been enormous.

FAW: When a Tennessee mother packed off her adopted son on a plane back to Russia with only a note, many people were outraged. But others who have walked in that mother’s shoes, were more understanding. 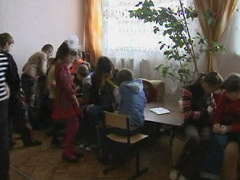 JULIE HARSHAW: My first reaction was that I could empathize with her, knowing that she must have been going through probably a lot of the same things that we go through, and certainly don’t condone how it was done.

FAW: You could understand?

JULIE HARSHAW: I could understand, and unfortunately, people like to judge you before they know what you’re going through.

FAW: Eighteen-year-old Elyana identifies with that little boy sent back home alone to Russia. She knows first-hand what it’s like to be cast away.

ELYANA GOLDWATER: When I heard about the Tennessee issue, I thought, “This is not a store. You can’t buy and return.”

FAW: Elyana was first adopted in 2000 by a family that wanted to help someone less fortunate. But it was not a good match, and the parents halted, or what caseworkers would say, disrupted the adoption.

FAW: It does leave scars?

GOLDWATER: It does, it does.

FAW: Elyana’s pain, her longing, was captured in a poem she later wrote.

GOLDWATER (reading poem): When I was little, little as you, I had a dream I thought would never come true. I dreamed of a family that would fill my heart with love. 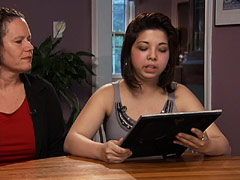 FAW: For “disrupted” children, the wounds are lasting.

FEDERICI: Permanently scarred by having the hope of an attachment and then the disruption. The concern that I have on a lot of families is that when they adopt they may not always see it as a permanency nowadays, because there’s a lot of openings or availability to disrupt adoptions. Many of the agencies who know they may get sued will say we’ll take the child back.

JANICE GOLDWATER (Adoptions Together): The issue is how much a parent claims a child as their own, and so when parents claim their biological children as their own it comes naturally. We’re programmed hormonally to claim our children when they’re born. When we adopt children, it’s more of a process, and so once a parent has claimed a child as their own, you rarely to never see them give up on that child.

FAW: Janice Goldwater, who runs an adoption agency in Maryland, is Elyana’s mother. Elyana was adopted a second time by the Goldwater family in 2000 when she was eight. Janice found out everything she could about Elyana and knew the family would have to invest time and money in helping Elyana heal. When it comes to adoptions, she says, the best intentions are not enough. Love does not conquer all. 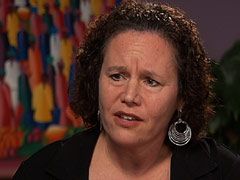 FAW: Who is morally responsible, then, for the outcome of an adoption?

(speaking to Janice Goldwater): Morally, the parent has a responsibility to find out as much as he can.

FAW: And the agency morally has a responsibility to reveal as much as they can.

GOLDWATER: Families do get a tremendous amount of information, and in, you know, some instances they don’t.

FAW: The Harshaws, who spent over $25,000 to adopt their son, say they were not informed of Roman’s problems and are suing the adoption agency they used. The agency disputes their claims.

FEDERICI (speaking to patient): You are doing pretty good on this one.

FAW: Dr. Ronald Federici, familiar with hundreds of cases in the last 24 years, says agencies don’t work hard enough at getting the information about these children, and parents don’t push them enough. 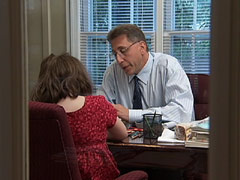 FEDERICI: Both sides have not done due diligence. Families didn’t ask because they were told there’s nothing else available. Parents go in hopeful, trusting, pay a lot of money, but are often ill-informed and don’t do enough due diligence on their end on the part of the agency, and push them harder.

JANICE GOLDWATER: Sometimes nobody knew. Issues emerge as the kids grow. We’ve placed infants that appear to be healthy and grow up and have autism, Asperger’s. You have all kinds of issues that nobody had any idea was going to happen.

FAW: The moral choice facing the Harshaws in regards to their son’s future is difficult. Grace could be in danger if Roman returns home. Daniel, their 13-year-old son who’s stayed away from home because of Roman, may start doing so again. The family stress was so bad Daniel asked to see a therapist. And the Harshaws’ marriage has been severely tested.

JULIE HARSHAW: Chip and I basically are like two ships passing in the night. We don’t see each other, because one person has to control Roman while the other person has the other two. So the family unit’s kind of falling apart.

CHIP HARSHAW: We’ve considered everything, even in our marriage we have, and the truth is that we really need each other because of this issue. At the same time, sometimes it doesn’t feel like you’re married anymore, because of the amount of stress that we’ve become different people because of this situation.

FAW: People who watch this will say, at some point you’ve got to say to yourself we have tried everything, and that being the case we can walk away. 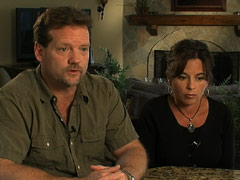 CHIP HARSHAW: There’s a bond there that has been created. He is our child, and we are his mom and dad. That he knows. That’s all he knows, that we are mom and dad, and to turn our backs on him and to walk away and say there’s nothing else we can do, that’s what is bothersome to Julie and I.

FAW: Even what they’ve done temporarily, putting Roman in a facility where he can get treatment, does not ease this family’s anguish.

JULIE HARSHAW: I was thinking about Roman, I’m thinking about what he’s doing. I’m thinking, about am I a horrible mom for having him there? If I let go of him permanently I don’t think I could ever live with myself. There is that part of him, that little boy, that is there that is trying to love the only way he knows how, and it’s not his fault that he can’t control himself.

FAW: When he does come home, what are you going to do?

GRACE HARSHAW: Give him a hug.

FAW: Ultimately, what happens to Roman is uncertain. For Elyana, the prospects are much brighter. Remember that sad poem she wrote? Listen to how it ends.

For Religion & Ethics Newsweekly, this is Bob Faw in Silver Spring, Maryland.