SAUL GONZALEZ, correspondent: Los Angeles County’s Twin Towers Correctional Facility: it’s one of the largest jails in the country. Behind its walls, over 3,000 men are locked up as their criminal prosecutions continue. Many prisoners are accused of committing murder, rape, and a variety of gang-related crimes. However, this jailhouse is also a house of worship to Dennis Gibbs, a senior chaplain at Twin Towers. His Sunday services are like few others, held in a cell block and closely watched by sheriff’s deputies.

CHAPLAIN DENNIS GIBBS: I think this is a holy place. I believe that we are standing on holy ground. This is a place of reconciliation and healing, and so I really see this as—in many ways this is my parish. 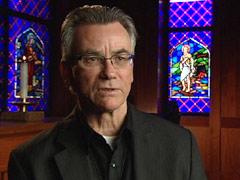 GONZALEZ: Chaplin Gibbs is one of dozens of clergy men and women from a variety of faiths who offer pastoral care and spiritual guidance to the inmates at Twin Towers. Although an Episcopalian, Chaplain Gibbs provides spiritual counseling to all prisoners who approach him, no matter what their particular faith.

GIBBS (speaking to prisoner): Hey, man, how is it going? Good to see you again.

PRISONER: Could you say a little prayer for me and my girl, my baby?

GONZALEZ: Although the chaplain doesn’t condone what these men are accused of doing, he also doesn’t apologize for showing them compassion.

GIBBS (praying with prisoner): God the Holy Spirit be upon you and remain with you forever. 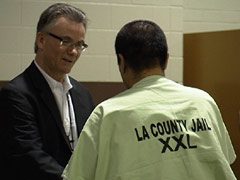 GONZALEZ: Carlos Ortiz, who’s been at Twin Towers for six months, was recently convicted of drug possession. He says Chaplin Gibbs and other jailhouse clergy help inmates sustain and develop their faith when they need it the most.

ORTIZ: If you don’t have faith, they provide faith. You know, I am a man of faith, so just the fact there is someone that you can talk to, someone that can acknowledge about God, that’s something good for inmates. The situation you are at might not be good, but he makes you realize that you are good spiritually and physically, you are in a good spot.

GONZALEZ: Along with larger worship services, the chaplains spend much of their time holding private one-on-one sessions with prisoners who want to talk to them. Episcopal chaplain Greta Ronnigen says she’s not interested in why the men she ministers to are here.

GONZALEZ: You don’t care what the guys are in here for?

GONZALEZ: Why? That seems counter-intuitive.

RONNIGEN: Because I am here for their spiritual support. I am not a lawyer. I am not social services. I’m about where they are with God. I am here to talk to them as they turn, turn away from the dark that has been their past, and they are looking, they are seeking.

GONZALEZ: Some of the prisoners at the center of complex cases, such as murder or gang-related crimes, can be held at Twin Towers for years before they’re convicted and sentenced to state prison. Except in extraordinary circumstances, say when an inmate might be threatening to murder someone, the jailhouse clergy keep confidential what they hear from prisoners, as Chaplain Gibbs explained in a conversation back at the Los Angeles Episcopal diocese. 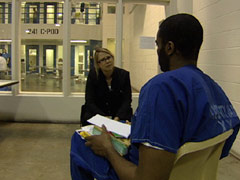 GONZALEZ: If an inmate says something in a confession and admits to something horrible you don’t have to report it, right?

GIBBS: Yeah, it’s protected. The nature of confession is that it is a sealed sacrament, and that’s important for the men. Once the priest puts on that stole and enters into the sacrament of the church, it is a completely sealed and confidential conversation, just like it would be with somebody confessing in their church.

GONZALEZ: The presence of the chaplains at county lockups also helps ease tensions and assuage anger, and the sheriff’s deputies welcome that. However, at Twin Towers security and punishment always come before worship, and that’s especially true in the jail’s highest security units or pods.

GIBBS: In this particular unit they are complicated cases. I would say a very good majority of the men are in here for homicide, and there’s a lot of gang-related crimes in this pod.

GONZALEZ: Here, services are often conducted through steel doors and plexiglass, and services, as in the day we were shooting, are often cut short by lockdowns. 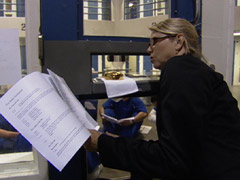 GIBBS: Yeah, the jail just went on full lockdown, so we never really know what that is about, just that a full lockdown means that there is no movement whatsoever, so we want to wrap up rather quickly. Hopefully, we’ll be able to get out of the jail.

GONZALEZ: Although he doesn’t get into the details, Chaplain Gibbs knew about confinement long before he arrived at Twin Towers six years ago.

(speaking to Chaplain Gibbs): You were in jail yourself?

GONZALEZ: I’m sure, Chaplain, when the men at Twin Towers hear about your past, and I’m sure you share some of your past with them, it gives you a particular credibility.

GIBBS: I think it does. I think it changes the conversation to a degree and kind of alerts people that I am not just some do-gooder Christian guy coming in to tell you that Jesus loves you.

DAVID YI: He does give us hope. That he was once an inmate also and now this is where he’s at, helping other people find themselves—it’s just a lot of hope.

YI: Exactly. Someone you can lean on. 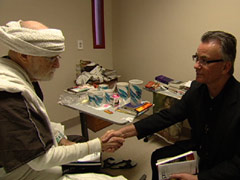 GONZALEZ: One of the Twin Towers prisoners Chaplain Gibbs has gotten to know the best in recent months is also the most unusual. He’s William Manson, a scholarly 80-year-old physician recently convicted of killing his ex-wife. Already in the hospital ward, Manson knows he’ll likely die behind prison walls.

WILLIAM MANSON: I think that the sentence was just under the circumstances. I did the crime. Now I’m paying the price.

GONZALEZ: And spiritually are you armed for this, for this life that you have ahead of you, being a man of faith?

MANSON: Thank you very much.

GIBBS: As chaplains we absorb people’s sadness, their brokenness, their wounding, their depth of spiritual despair, and we are very aware of that as chaplains. I think in many ways we hold for these inmates often what they cannot hold for themselves.

(anointing and blessing prisoners): May your wounds be healed.