KIM LAWTON, guest anchor: It’s the time of year when many of us try to schedule a vacation to get away from it all. Scientists have long found an association between relaxation and health. Now there is growing evidence that spiritual practices have a beneficial and measurable effect on the brain. In his book “How God Changes Your Brain,” Andrew Newberg reports that meditation improves memory and reduces stress, and how you view God can affect the structure of your brain. Lucky Severson has the story. 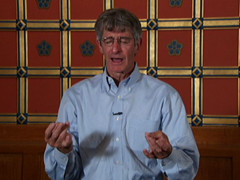 DR. ANDREW NEWBERG (University of Pennsylvania, with brain scans): Okay, so it is asymmetric, more active here than here, and after meditation it’s more active here than here. So simply doing the practice of the meditation he’s altered the activity in this very, very important part of the brain, and this is really important, because this means he has changed the way his brain is working. 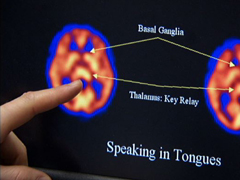 SEVERSON: Over the years Dr. Newberg has adapted a 12-step meditation exercise that includes sound, movement, and breathing.

SEVERSON: But Newberg has made another discovery, a controversial one, that our belief system, how we view God, can make a huge difference in how it affects our well being. If we believe in a loving God it can have a positive effect, even prolong our lives. But believing in a judgmental, authoritarian God can produce fear, anger, and stress, and that’s not healthy. 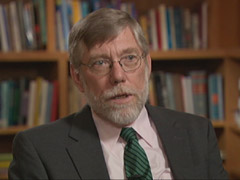 Dr. NEWBERG: I’m not arguing that people need to change their beliefs per se. I mean if they feel that their perspective on God is right, I mean then that’s terrific. But I think that what we have to all be careful about is the anger and the hatred, and that’s what has detrimental effects both on the individual as well as on society as a whole.

Dr. NEWBERG: You know, if we get a brain scan of somebody while they’re experiencing being in God’s presence, as I’ve always said that doesn’t prove that God was in the room. It doesn’t prove that God wasn’t in the room. What it proves is that when the person had the experience of interacting with God this is what change was going on in their brain. 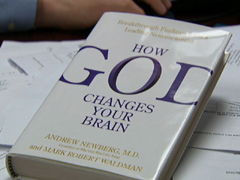 SEVERSON: Dr. Newberg has found there are some religious practices where the person is intensely focused and others where they just allow themselves to be taken over, for example, speaking in tongues. Dr. Newberg has scanned the brains of people of all belief systems, of people with no faith, and those of deep conviction, like Donna Morgan, who is a Pentecostal.