REV. LEO PATALINGHUG (at Delaware State Fair): And I’ve got myself here a nice, beautiful piece of flank steak.

LAWTON: Father Leo is a chef who has his own Web-based cooking show called “Grace Before Meals.” It gets more than 10,000 hits a day from around the world. He’s written a cookbook with the same title.

REV. PATALINGHUG (on “Grace Before Meals” show): We ask God to bless us this holy season and the food we’re about to receive. 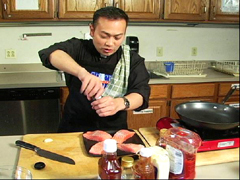 LAWTON: He says food is very much part of his priestly ministry.

REV. PATALINGHUG: Theologically, this is what Jesus did. Most of his greatest lessons were taught around a dinner table.

LAWTON: In his day job, Father Leo is director of pastoral field education at Mount St. Mary’s Seminary in Emmitsburg, Maryland, the second oldest and second largest Catholic seminary in the country.

REV. PATALINGHUG: Sometimes I like to say I’m teaching future shepherds how to feed their hungry flock.

LAWTON: He teaches classes on a variety of subjects, such as how to give a good sermon, and even here, he finds a connection with food.

REV. PATALINGHUG: I teach a preaching class, which means I can’t have guys dishing out stale, boring leftovers, but dynamic things that are going to make their appetites just expand, and to whet their appetites to show that what we have to offer is good news

LAWTON: Father Leo says his mother taught him how to cook when he was a kid.

REV. PATALINGHUG: My love for cooking started just because I like to eat!

(Cooking at state fair): I love that sound.

After doing my activities I would get bored quickly. Mother would invite me to help her with cooking because it’s a multi-tasking thing, and that actually piqued my interest.

LAWTON: Father Leo grew up in Baltimore, where his family had emigrated from the Philippines. He says faith and food were both very important in his family’s life.

REV. PATALINGHUG: My family style of eating is very much a feast day celebration and yes, we prayed before every meal, and it was something serious, because in my country not everyone gets a chance to eat, and so they reminded us that even though we were living in America, a land of plenty, there are a lot of people who don’t have the blessings on the table as well as the blessings around the table.

LAWTON: He didn’t always know he would become a priest. He first dabbled in several other fields, from break dancing to martial arts.

REV. PATALINGHUG (at state fair): I used to be a martial artist. I still practice a little of it. Third-degree black belt instructor in tae kwon do, as well as a full-contact Filippino martial art called arnis. So if you asked what I did for fun before I became a priest, I used to beat people up with sticks. That’s what I did. 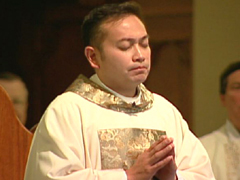 LAWTON: In the midst of it all, he says a series of events, including a skiing accident and a breakup with his girlfriend, had him turning to God in prayer. Then, he says, he traveled to the Philippines with the US stick-fighting team.

REV. PATALINGHUG: I remember going to this one village, and we were handing out candy to people, and there was one little boy who only had a t-shirt, on and he came up to me, and I gave him a piece of candy, and I looked in his eyes, and I thought to myself, had it not been for my dad bringing us to America, that could have been me.

LAWTON: He felt that God was calling him to help people like that boy, and to do so by becoming a priest. He entered seminary and was ordained ten years ago when he was 29. Father Leo says the food part of the ministry evolved naturally as he began building relationships with his parishioners. He often scheduled counseling sessions around meal times.

REV. PATALINGHUG: They call me Father. I’ m supposed to be part of their family. So I would help them, we would gather in the kitchen, we would cook, I helped set up the table, and they saw the human side to me and not just the spiritual side.

(on “Grace Before Meals” show): Bless this food.

LAWTON: The idea for a cooking show was born just after the attacks on September 11, 2001.

REV. PATALINGHUG: So after a very tragic weekend worth of Masses where the churches were full, hungering for an inspiration of hope, we ourselves, the ministers, we were spent. So we went on a little retreat together, and I did all the cooking—comfort food. So one of the priests suggested, “I love watching you cook. It would be great if I had a video camera and taped all of this. You could talk about food, faith, family and culture.” And I looked at him and said, “That’s one of the dumbest ideas I have ever heard.”

LAWTON: But his fellow priests didn’t think it was so dumb. Father Leo says they kept nagging him about it and eventually connected him with a producer and a production company who loved the idea of a priest cooking show. 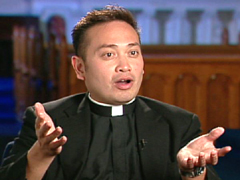 REV. PATALINGHUG (on “Grace Before Meals” show): Ketchup—do you see that slob right there? That’s what confession is for.

LAWTON: He now does “webisodes” of the cooking show online, often with the help of his seminarians, and his Web site has recipes and blogs.

REV. PATALINGHUG (on “Grace Before Meals” show): Cleanliness is next to…you know what I mean.

LAWTON: He’s also become a much sought-after speaker, and he does cooking demonstrations around the country, such as this appearance at the Delaware State Fair.

LAWTON: His motto is feeding people, mind, body and soul, and he believes that families are strengthened when they share meals together.

REV. PATALINGHUG: We know that families are buying so much into the fast-food mentality that they spend no time with each other. My objective for “Grace Before Meals” is to create mini-Thanksgivings throughout the year.

LAWTON: When he speaks to a secular audience, he tries not to be aggressively religious.

REV. PATALINGHUG (at state fair): We all are hungering for something, and that’s why people go everywhere to find something to satisfy them. What I would like you to consider is to make sure you have a balanced diet for your body, your mind, and your soul.

Unidentified woman at state fair: I loved how he brought the spirituality into the mealtime and the family. I think that’s what drew everybody’s attention. And the food was delicious!

LAWTON: He’s gaining international attention and was just challenged to a cooking competition by celebrity chef Bobby Flay. I asked him how he keeps it all from going to his head.

REV. PATALINGHUG: I guess the celebrity status can be a temptation for anyone, but as a priest I’m somewhat protected in this. I’m required to spend time in quiet prayer and reflection. A holy hour a day gives me a great perspective. I’m just me doing something good for God.

LAWTON: Father Leo does get criticism from some Catholics who think it’s inappropriate for a priest to be doing what he does. But he asserts that his food ministry is deeply Christian.

REV. PATALINGHUG: We believe, at least in the Catholic Church, what binds us together and what binds God to us is food: a piece of bread turned into the body and blood of Christ in which we are incorporated into his family.

(at state fair): I’ve got to tell you that I know that the collar freaks people out a little bit.

LAWTON: Father Leo says for him, one of the most important parts of his cooking ministry is reaching out to people who may be uncomfortable with priests and helping them learn a little about God.

LAWTON: And that, he says, is a grace that extends beyond every meal.