DEBORAH POTTER, correspondent: Almost 90 percent of the students at Rainbow Elementary School in Berlin are from immigrant families, most of them Muslim. Fitting in can be tough, because a lot of them can’t speak German—even though many of their families have been here for decades.

HEIDRUN BOEHMER (School Principal): When I started being a teacher more than thirty years ago I thought that problem we won’t have in ten years. They all will speak German. But they don’t.

POTTER: Heidrun Boehmer has watched her students struggle to succeed. About 75 percent never finish high school—more than double the national rate. In school and the outside world, their chances are limited by a complicated mix of social and economic issues, religion, and history.

Muslim immigrants, mainly from Turkey, first came here in large numbers in the 1960s, when Germany was facing a severe labor shortage. They were called “guest workers,” but most of them never went home. Instead, they brought their families and settled in neighborhoods like Neukolln in Berlin, where shop signs are in Turkish and Arabic, and satellite dishes bring in programs from back home. Storefront mosques are tucked behind fruit stands. Until ten years ago, immigrants could not become German citizens, and they still don’t have a chance at most government jobs. Integration just hasn’t happened. 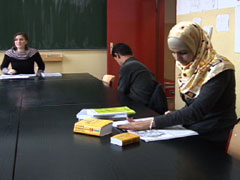 RIEM SPIELHAUS (Humboldt University): People who live here since forty, fifty years, were born here in the third generation, are understood as foreigners, are understood as immigrants while they are not. They just have a different faith. So this debate leads to people thinking about their neighbors as problematic because they do have a different faith.

POTTER: Today, Germany has about four million Muslims—five percent of the population, making Islam the second largest religion. Germany has more Muslims than Lebanon and twice as many mosques as the United States. Young Muslims here describe themselves as more religious than their parents, in a country where few Christians go to church. Berlin is sometimes called the atheist capital of Europe. But while religious freedom is enshrined in the German constitution, public schools are required to offer Christian religious instruction. Leaders of Muslim organizations are now demanding Islamic religious instruction as well, and tensions are growing.

POTTER: According to public opinion polls, the vast majority of Germans associate Islam with violence and terrorism, and they resent what they see as too many Muslims sponging off the German welfare system. But the country’s strong social safety net may be one reason why Germany has not seen the kind of violence that scorched Muslim neighborhoods in France a few years ago. Young Muslims there took to the streets, angry about unemployment and police brutality. Nothing like that has happened in Germany, even though the jobless rate in some Muslim neighborhoods hovers near 50 percent.

BARBARA JOHN (Office Against Discrimination): If there is no easy opportunity, or if they can’t make as much money as they get from the state as welfare money, they don’t work, of course. It’s not that they don’t want to work, it’s just reasoning, and they are rational people.

POTTER: Barbara John has spent 30 years dealing with integration issues, a task complicated by the fact that Germany has never had a policy of limiting immigration.

JOHN: It’s part of our history of Nazi times. We were guilty, and we still feel guilty, especially when it comes to minorities and to accepting people who are persecuted, and once we were, ourselves, able to give it, we could hardly say no, and now immigrants come, and they want to live in Germany, they want to be proud of this country, and the Germans themselves are not. So integration is difficult for these minorities. 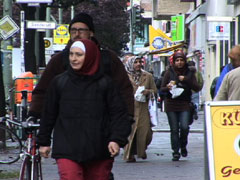 POTTER: The government is now trying to help, offering subsidized language and culture classes for adults at a cost of about $200 million a year. But those who sign up don’t always come.

NADINE HASKE (German Language Teacher): Some of them, they’re not interested. But some of them, also, they have many problems here with immigration, problems that we can’t understand—problems with job, to find a job.

POTTER: The problems are all too apparent to Ender Cetin, who says Muslims want more than equal job opportunities. They want to feel truly accepted.

ENDER CETIN (Turkish-Islamic Union): We feel many, many attacks, not violence but in words, feel many, many kind of discrimination. This makes us also afraid a little bit. There’s a distance. That’s not so good for integration.

POTTER: Cetin was born in Germany but chose to retain his parents’ Turkish citizenship rather than give it up, as required by law, to become a German citizen. As a spokesman for the biggest mosque in Berlin, he now gives tours to school groups, hoping to make Islam seem less threatening.

CETIN: We have many, many questions also in these years and the questions are always the same. The question is—terrorism and Islam, can it be together?

SINAC: I go to school, learn very good German. For me it’s okay, and I have not problems.

POTTER: In the long term, Germany needs immigrants. The country’s birth rate is one of the lowest in Europe, the cost of its social programs among the highest.

JOHN: We have to consider these people as our future, too. They are—their children, the children of the immigrants, are our children, are the children in Germany, they are the children of everybody, and we have to care for them and look after them and give them a better education, give them a good education, so why shouldn’t they be successful? It’s everything in human nature that can make them successful, and we are a country that has money, and we have educators, so we should improve our system.

POTTER: But there’s a long way to go. Other Western democracies have similar problems, but a new study by an international economic group says Germany does about the worst job of providing equal opportunities for immigrants and their children.