RAHIMA ULLAH: This week it’s towards the end of summer, and we were lucky enough to be able to enroll in this summer horseback riding camp. My sister, Jasmin, is the 16-year-old, and my eight-year-old daughter, Sakina, they’re both in the camp spiritually and mentally preparing for Ramadan in this natural setting. For me nature, and for Muslims in general, nature is this great, awesome sign of God’s creation. Muslims are very excited about Ramadan. A lot of people will describe it in a metaphorical sense of as expecting a month-long guest because of all the excitement surrounding it in terms of being with your family, establishing and reestablishing your relationship with God and those around you. 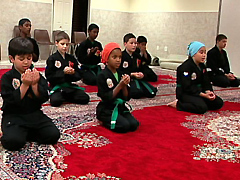 We follow the lunar calendar, and so every year Ramadan moves up in the year. This year it’s in the summertime. It’s going to be more than twelve hours that — no eating, no drinking the whole day, and you’re still supposed to do all the things that you’d normally do. So, yeah, it’s a challenge, definitely, but I’m still looking forward to it.

Two of the things that people look forward to every year during Ramadan would be the iftars, which is when we break our fasts at the end of the day, at sunset, and then the prayers, the special Ramadan prayers that come after our evening prayers.

JASMIN ULLAH: It’s — you’re supposed to start fasting when you hit puberty, so for guys and girls it’s different ages.

SAKINA AHMAD: I started my fast when I was six. It was hard. I kept on breaking it by accident.

RAHIMA ULLAH: Really, what’s actually encouraged is throughout the year we should be fasting every once in a while as extra fasts.

ABDUL-MALIK AHMAD: I try as much as I can not only to fast in Ramadan but also regularly throughout the year. It’s usually suggested that we fast on Mondays and Thursdays. Those are the days where the Prophet Muhammad, peace and blessings be upon him, fasted. 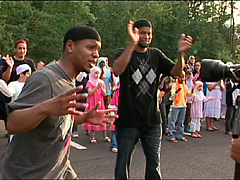 JASMIN ULLAH: And during Ramadan actually being angry and acting on your anger breaks your fast, so it’s very much an emotional discipline as well as a physical discipline.

ABDUL-MALIK AHMAD: The discipline that we practice during Ramadan is the same kind of discipline that we try to promote in the martial arts—restraining from anger, treating people properly, just taking care of yourself spiritually and physically. The martial art style I do is called pencak silat. You’re supposed to use the skills that you learn for peace and for helping other people and not for violent means or violent reasons.

ABDUL-MALIK AHMAD: As Native Deen, in our songs we try to give Muslims pride about their faith, and we also teach other people a little bit about Islam. One of the things that we really wanted to promote in our song is the feeling of happiness: Ramadan’s here. Get close to God. Fast, but also be happy. It’s a time of hardship, yes, because you’re fasting from sun-up to sundown. But there’s a lot of joy in it. We see families getting together for the iftar or the break-fast.

RAHIMA ULLAH: It’s very special to see that mosque just packed with people. It’s such a warm, wonderful feeling to be around so many people who all have this goal of pleasing God. Even if we think our relationship with God and the people around us are great, there’s always a way to get better. And so Ramadan is that really intense, focused way of doing that, of fasting and working on our own selves and then working on our relationships to others and ultimately our relationship to God.

ABDUL-MALIK AHMAD: There’s a prayer that we always say: “Grant us good in this life and good in the hereafter.” A lot of prayers that we do in Ramadan is really asking us for in the next life, in paradise, in heaven, that we attain the highest levels of heaven, to maybe see our beloved Prophet Muhammad when we’re there.