BOB ABERNETHY, host: The holiest time in the Jewish calendar begins next Wednesday evening (September 8) with Rosh Hashanah, the Jewish New Year, and ends with Yom Kippur ten days later. For Jews around the world, it’s a period of introspection and atonement. During both Rosh Hashanah and Yom Kippur services, congregants hear the sounding of the ram’s horn or shofar. Our producer, Noelle Serper, visited the Glickman family near Buffalo, New York, for whom sounding the Shofar has been a three-generation tradition.

NOELLE SERPER, producer: When the congregation gathers at Temple Beth Am to celebrate Rosh Hashanah, they will experience what Jews have for centuries—the blast of the shofar as a kind of wake-up call.

It’s a reminder. It sends a shiver, that we can be better than we are, and how do we approach God but with that strange cry in our ear, and perhaps on our lip, and we come before God and we say who are we? What are we? Remember what we could be, and help us along. 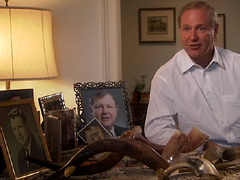 The Glickmans, for three generations, have been our shofar blowers here in this congregation.

SERPER: Marshall Glickman became Temple Beth Am’s Ba’al Tekiah, or the one who sounds the shofar, over 40 years ago.

MARLENE GLICKMAN (Widow of Marshall Glickman): They used to time him, because he could hold it so long, and they couldn’t believe it. He felt a commitment to his religion and a commitment to his God and to his congregation. He just felt like it was a gift that he was giving to the community and that he was the person through God giving that gift. At his funeral, there were over 800 people.

JOE GLICKMAN (Son of Marshall Glickman): When the funeral was over, when they put him in the ground, we blew the shofar, and it was quite nice. It was very lovely. The notes were great, and I don’t know that I’ve ever played the notes as well as we did at that point. But at that point I guess people said, “Wow, you should keep on playing,” and “Why don’t you and your son play in echo?”

JOE GLICKMAN: They listen to the shofar, and they can close their eyes and say, “This is the same sound I heard 10 years ago, 15 years ago, 20 years ago.” These are the same prayers, the same music, and they feel a oneness with times gone by.

STEVE GLICKMAN (Marshall Glickman’s grandson): Blowing the shofar is a family tradition that my grandfather started when he was 15, and I started when I was 14. It just makes me happy to continue that tradition.