BOB ABERNETHY, host: With President Obama’s formal announcement that combat operations in Iraq are over, two assessments of whether the war was the right thing to do. William Galston is a senior fellow at the Brookings Institution in Washington. Michael Cromartie is vice president of the Ethics & Public Policy Center, also in Washington. Welcome to you both. Michael, was the Iraq war the right thing to do?

MICHAEL CROMARTIE: Well, Bob, you know the British prime minister, Tony Blair, has just come out with an autobiography, and he makes the point in there that the removal of Saddam Hussain from power was a great good. I agree with Tony Blair that the Iraq war is tragic. It has been, in the loss of life—that’s been sad. It was the right thing to do.

ABERNETHY: If you had known in 2003 what the costs would be, the costs in lives and money and everything, would you still have favored it?

CROMARTIE: Bob, the cost of lives and money and—every war is a miserable cost, painful cost, and I think looking back on any war you want to say is any war worth it after we see what the results are? That’s can’t be considered without considering what was going on before—what Saddam did to his own people, what he did to his neighbors, the threat that he posed to so many parts of the world.

ABERNETHY: Bill, was it worth it?

WILLIAM GALSTON: I don’t think so, and equally important, a large majority of the American people don’t think so either, and in a democracy that’s something that needs to be taken into account. It’s not dispositive, but it needs to be taken into account. And one of the principles of just war theory is the principle of proportionality—that even if it’s justified the good that is done has to exceed the harm. There’s also reason to believe that the war did not satisfy the requirements of just war theory. It was not a defensive war. It was not a preemptive war. It was a preventive war, which is very hard to justify, and the administration’s case for preventive war did not pass muster.

ABERNETHY: So primarily on the consequences you think it was not right to do. 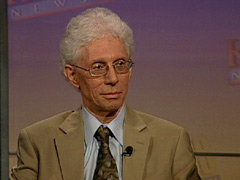 GALSTON: No, there are two reasons. First of all the prudential reasons, that is, the good achieved, and there was some genuine good achieved, was outweighed by the harm done. But also on the moral and legal plane, if you take just war theory seriously and apply it to this case, I’m afraid it doesn’t pass.

CROMARTIE: But let’s look for a moment, Bob, at the good achieved, if I could in response to Bill.

ABERNETHY: We don’t know what the good was, do we, yet?

ABERNETHY: What do you think the lessons are to be drawn? Bill?

GALSTON: Well, one lesson is a lesson that General Petraeus has articulated recently, as have a number of people around him, including General Odierno, namely that we didn’t know what we were getting into and we had a duty to know more about the country, the society, the history, the complexities, the pitfalls, and General Petraeus has taken that lesson with him into Afghanistan, I hope, with better results. And another lesson I think we had better draw is the same one that the drafters of the Declaration of Independence understood full well, that is to say there is a decent respect owed to the opinions of mankind, and I’m afraid that we did not take that adequately seriously in the run-up to the war or the conduct of the war, and I think we’ve paid a huge price for that.

ABERNETHY: Michael, the lessons for you? 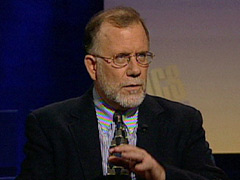 CROMARTIE: Well, one of the lessons is the mistakes that were made going in. Remember Secretary Rumsfeld said we needed to have a light footprint, and I don’t think even the surge would have been necessary if we had not done a better job of securing the country earlier. Rumsfeld’s view was that we would go in lightly and leave quickly. Of course, none of that’s happened and I think that was a big mistake.

ABERNETHY: Tell me what you think about the possibility of other situations where we think the head of a country is dangerous. Do we—

CROMARTIE: There’s still some of those around, by the way.

ABERNETHY: Do we still have the right to send in our troops, to invade, to kill the leader? Do we have that right?

GALSTON: Preventive war. First of all, I think we have relearned what we should have known from the beginning, that is, a preventive war is the most difficult war to justify, and you’d better be darn sure of your facts and your grounds before entering into it. But the second lesson to be learned is that the argument that good will be done if we perform act “x” is an inadequate argument on its face for two reasons—first of all, because there’s also the other side of the balance to be taken into account. You need to do double-entry bookkeeping. And secondly because not everything that is productive of good is justified. There’s lots of good that we could do potentially that we are estopped from doing because there are norms that prevent us from doing it, and there’s a reason why those norms exist, and so arguments of the form “the world is a better place because of x” are not adequate.

ABERNETHY: Michael, quickly, you served for many years on the—

CROMARTIE: —the US Commission on International Religious Freedom

CROMARTIE: It’s very bad in Iraq right now. Christians have fled Iraq. Sectarian violence toward Christians and toward churches is in a miserable state, and that’s one of the areas where the Iraqi government needs to do a better job of insuring protection of all religious minorities in Iraq, because it’s not a good situation.