JUDY VALENTE, correspondent: The Abbey of St. Benedict, founded in 1857 …

Benedictine monks praying together: “Glory to the Father and to the Son and to the Holy Spirit…”

VALENTE: The abbey is located on the campus of Benedictine College in Atchison, Kansas. Fifty-two monks live here. They lead lives of prayer and contemplation. The abbot is Barnabas Senecal. He has found a spiritual practice in photography.

ABBOT SENECAL: Taking photographs reminds me of the positive. Monastic mindfulness is pursuing what Benedict taught about being aware daily of your presence of God with you and in the world. It’s mindfulness of creation and of sharing that with others. 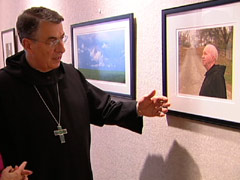 VALENTE: About 40 of his photographs are now on exhibit at the abbey. His photos include his fellow monks.

ABBOT SENECAL: Those who didn’t know his name call him Father Time. He was an inspiration to us—just a gracious man who also swam every day until he was 100 years old, a man of prayer, a man who came to our communal prayer even when he was 100 years old. We give thanks for a man of such character.

ABBOT SENECAL: Late in his life liked to read, liked to sit out on the porch and smoke his pipe. What we save is a memory of a man, a face that’s—he’s very content with life and just a wonderful smile. You know, in Benedictine life we take a vow of stability, and it means that this community is where we live out our life, even where we are buried.

Father Bruce Swift—he loves going down to Lansing to the state penitentiary twice a week, hears confessions, offers Mass for the prisoners. It’s a ministry to him, and he’ll do it until he can’t move. At some point in time his health will give way, but he’s ready to travel that road.

VALENTE: At the Vatican…

ABBOT SENECAL: We sit in silence admiring beauty, and this is beauty from centuries ago. We ought to let it influence our heart, let it be a moment of reflection and yet not be intimidated by it.

ABBOT SENECAL: They let you go on this upper balcony above the Bernini altar, so I shot through the grate into the south transept gaining a sense of depth by the size of the people. This is an amazing place where amazing grace is found by many. 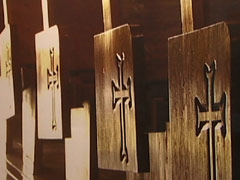 VALENTE: The pews at a church in Brazil…

ABBOT SENECAL: I liked the image of light—an inviting light inviting people into the church, into prayer. There’s lots of images of light in the Scriptures. Christ the light of the world, the light that enlightens us in our hearts and minds.

VALENTE: You take a lot of photographs of children.

ABBOT SENECAL: They’re natural. They don’t have to pose. People feel that if you got everything lined up it will be good. St. Thomas talks a lot about order as reflecting God’s presence. This is a fun moment, and yet we can interpret it as a way of seeing life.

I am nourished by taking pictures. Yes, it’s a spiritual exercise in that I don’t just take a picture and store it. I will reflect on it. Entering into these moments of photograph is a conviction that I’m seeing something that I didn’t make, the other person didn’t make. It’s there, it’s there because it’s part of God’s creation.

VALENTE: A grasshopper on a leaf. He wrote this reflection on the photograph.

ABBOT SENECAL: A quick camera shot, up close, holds that beauty before me. I don’t own such beauty. No one does. It is the Creator’s forever, and mine for now, and I share it with you.

VALENTE: For Religion & Ethics NewsWeekly this is Judy Valente at the Abbey of St. Benedict in Atchison, Kansas.