BOB ABERNETHY, host: As the country observes the ninth anniversary of the Sept. 11 terrorist attacks, there’s been an extraordinary national conversation about the challenges of religious diversity and the boundaries of tolerance. There were protests and condemnations from around the world over a small, independent Florida church’s threatened plan to burn the Quran. Secretary of State Hilary Clinton called the plan “disrespectful and disgraceful,” and General David Petraeus, the top US and NATO commander in Afghanistan, and Secretary of Defense Robert Gates both said the act could endanger American troops. The debate came on top of another roiling controversy over plans to build an Islamic cultural center near the site of Ground Zero in New York. At a news conference on Friday, President Obama called for religious tolerance: 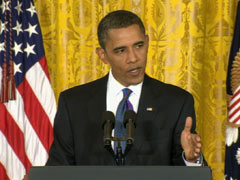 President Barack Obama: “We have to make sure that we don’t start turning on each other, and I will do everything that I can as long as I am president of the United States to remind the American people that we are one nation under God, and we may call that God different names, but we remain one nation.”

ABERNETHY: This week dozens of prominent Christian, Jewish and Muslim leaders held what they called an emergency summit in Washington, DC to address the tensions. The group released a statement denouncing anti-Muslim bigotry and urging respect for America’s tradition of religious liberty:

Rev. Gerald Durley (Providence Missionary Baptist Church): “We are convinced that spiritual leaders representing the various faiths in the United States have a moral responsibility to stand together and to denounce categorically derision, misinformation, or outright bigotry directed against any religious group in this country.”

Cardinal Theodore McCarrick: “This is not America. This is not our country.” 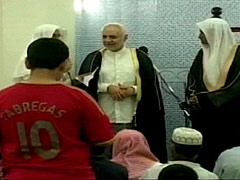 ABERNETHY: Meanwhile, Imam Feisal Abdul Rauf, organizer of the proposed New York Islamic center, said his mission is to build bridges between religious groups. In an op-ed column in the New York Times, he said interfaith support for the center is helping to undermine anti-American radicals who are trying to recruit young Muslims.

We get some perspective now on all this from Scott Appleby, professor of history at the University of Notre Dame and an expert on interfaith relations. Professor Appleby, welcome.

ABERNETHY: Anti-minority sentiment and actions in American history have not exactly been unusual. Is what’s going on now different?

APPLEBY: I think it is different in two respects. First of all, stories like this are immediate. They are broadcast right away, and we quickly hear not only the story itself but the echo of the story, what other people are saying about it. It takes on a life of its own. The second quality is the pervasiveness. It’s everywhere, that is to say, a story that has this kind of charge to it, by that I mean anti-Islamic feeling of whatever type, can be broadcast in a way and the media covers everything in such a way that someone who really doesn’t have a great standing or any expertise or knowledge but who wants to stir the pot, wants to get some attention wherever they may be from, can attract attention by pushing the envelope, doing something outrageous, and the cycle begins again. Another story, immediate echo, and we’re in the middle of a controversy.

ABERNETHY: And the consequences when something like Danish cartoons or some burning of something, when that goes out the consequences can, as all the officials of the United States government have warned, can be very dangerous. 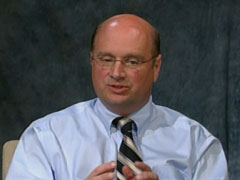 APPLEBY: And the point is we all know that. Anyone who’s paying attention realizes that we are in such a charged atmosphere with this instantaneous communication that can be very controversial, that I have power now, the power to incite, first of all, attention for myself or my cause, but also the feelings of others, because everything has been raised to a level of a lot of heat and not much light.

ABERNETHY: What are the major causes as you see them of the anti-Muslim feeling that’s going on now?

APPLEBY: Well, we have to realize that one thing that’s similar to other periods in our nation’s history of nativism, of attacks against people perceived as foreign, whether they are from another nation or another religion, what’s in common is we’re in an economic crisis. These episodes flare up when Americans are feeling displaced or threatened that their economic well-being and even their citizenship is somehow called into question by a threatening minority. And, of course, Islam in America is a tiny, tiny minority. Why pick on Islam? Because for nine years, almost a decade, the popular mentality is we’re in some kind of war with Islam, which of course is a distorted reading that’s not sufficiently shouted down by the right people. We are not in a war with Islam. We are in a conflict with a tiny minority of radicals who are denounced by the majority of Muslim leaders and Muslims around the world.

APPLEBY: No, there’s nothing about Islam itself that makes Islam stand apart from other religions. All the major world religions have texts and traditions that can be twisted, that can be interpreted to condone violence, including Christianity. Islam is not better or worse in that regard, that is, in what the sources of Islam say about violence. There are verses in the Quran and in the Hadith of the Prophet, the traditions of the Prophet,that can be read in either direction. Islam itself as a religion is in a different context today in the United States than Christianity or Hinduism in India, and so there are a lot of factors that make parts of the Islamic world and parts of the reaction in this country more vehement, more charged, and it doesn’t have a lot to do with the religion itself.

ABERNETHY: You have called “the biggest lie” what? The imagining that all Islam is—

APPLEBY: Rights, the assumption that Islam is inherently, that in its very nature Islam is violent, evil, that it’s a religion that produces murderers, liars, thieves, unpatriotic, etc., etc., etc. I’m a Catholic. The same thing was said about Catholics, and there are some parts of Catholic history, by the way, that can be interpreted as being antidemocratic and anti-American. The popes denounced religious freedom in the nineteenth century. So there are parts of a tradition, whether it’s Christianity, Islam, or Judaism that can be lifted up, twisted, and used as a cudgel, as a weapon, against people you don’t like because you are fearing them for a variety of reasons, and that’s what’s happened to Islam today.

ABERNETHY: Scott Appleby of the University of Notre Dame, many thanks.