BOB ABERNETHY, correspondent: At Harvard University, Arthur Kleinman is a medical doctor, a professor of both psychiatry and anthropology, and the director of Harvard’s Asia Center. Until 2003, life had treated him well. He was widely respected professionally, and he and his wife, Joan, a China scholar, had a happy marriage, with grown children and grandchildren—and then calamity. Joan Kleinman developed a form of Alzheimer’s disease that brought both dementia and blindness. Arthur Kleinman became her caregiver.

PROFESSOR ARTHUR KLEINMAN: It is love. It’s about the fact that you are there. This was the deal you made when you got married. The deal was to be there for that person, them for you. I helped her bathe, helped her dress, helped with feeding, and the feeling I had, I would say, was generally one of empowerment, to my—which was remarkable especially at the onset, that I just felt that as I learned to do the things and did them I felt a hell of a lot better, and I felt I was really contributing. I also felt it was self-strengthening in some way. It reaffirmed my love and my commitment to her, and over time, though, I think it drains you emotionally and physically as the requirements get greater, as you have to help your spouse out of bed, take them to the bath, make sure that they are safe in getting into the bath, getting out. You are constrained as the other person really begins to disintegrate in front of you, so my wife’s dementia led to a delirium in which not only didn’t she recognize me and the like, but she would be at times incoherent, flailing wildly, very paranoid about me and others because of the sense she couldn’t see and couldn’t understand what was happening. 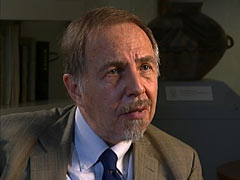 ABERNETHY: But Kleinman says his wife’s essential personhood did not disappear.

KLEINMAN: The memory may go. They may not recognize who you are, may not remember from minute to minute what you said. But you can still see, in the way they respond to you, feelings, deep feelings that represent the fact that they know you’re important in their life even though they’re not quite sure whether you’re the husband or the son or what your name is and the like.

ABERNETHY: I asked, did you ever feel angry?

KLEINMAN: Yeah, absolutely, and I think that anyone who says that they’re not angry in a situation like this at times is not fully honest.

ABERNETHY: But there was a feeling much stronger than anger.

ABERNETHY: As Dr. Kleinman balanced his work and his caregiving, he says he found great meaning in the Chinese Confucian tradition he and his wife had both studied. 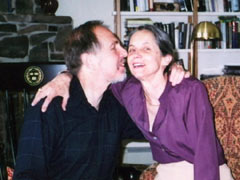 KLEINMAN: The deep commitment to family, the idea that family was central to everything that you did. The respect you have for somebody else—that your own humanness deepens as you engage the humanness of somebody else.

I found that that relationship became increasingly tied to my moral view of things—that I had enormous respect for her, that I felt that it was crucial for me to help her maintain her dignity. There is something remarkable about that feeling of being present with someone else, and I felt that for a long time in our relationship, and I felt that deepen as there were more acts for me to do. It was in the doing that I felt I was a caregiver. Not in thinking about it, not in talking to people about it, but actually doing it. The acts themselves I saw as moral acts.

ABERNETHY: Between the years 2000 and 2050, it’s estimated that the number of people 65 and over will more than double, and the number 85 and over will quadruple. And the longer people live, the more likely they are to suffer chronic diseases, failures of the body and the brain—to need care.

KLEINMAN: We have never seen the situation around the world, not just in the United States, look the way it is. We have left out of our thinking one of the cornerstones of society. 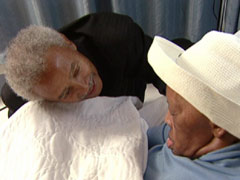 KLEINMAN: How much attention was given to the nitty-gritty of caregiving, the content of caregiving? I would say almost zero, okkay, almost no attention to that. And yet this is what families are going to face in the future.

ABERNETHY: Because he had bought long-term care insurance, Kleinman was able to hire a home health aide to help when he wasn’t there. He says she was indispensable. But by last summer Kleinman had come to realize that his wife needed more care than he could give. So, reluctantly, he moved her to a nursing home.

KLEINMAN: That was the most difficult thing. That is, that I had made up my mind that I would take care of my wife until the end, and I did it for seven to eight years until a point at which I recognized I couldn’t do it anymore. I couldn’t handle—and I’m a psychiatrist—I could not handle the agitation part of it, where she became so agitated and so distressed, and she really needed a safe place to be, etc., where she would be less paranoid and less threatened by things.

ABERNETHY: But then, new questions: how close to Joan could he continue to be? How often could he visit? How long should he stay?