DEBORAH POTTER, correspondent: Serving God and ministering to people is deeply fulfilling, pastors say. Yet studies have found that Protestant clergy also suffer from depression and obesity at higher rates than the population as a whole.

REV. JOSEPH STEWART-SICKING (Loyola University Maryland): Researchers like to joke that what we know about clergy is they’re satisfied, stressed out, and fat.

POTTER: Joe Stewart-Sicking is an Episcopal priest who teaches pastoral counseling and studies why clergy are more stressed than most of us. 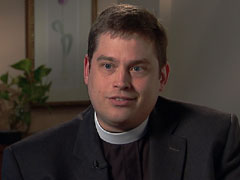 STEWART-SICKING: What makes the clergy vocation and occupation really different is that you work for God ultimately. If that work environment isn’t meaningful to you, you’re doing a lot of things like, you know, doing budgets or checking spelling on a bulletin, or office management, that’s going to really hit home, because you think your job should be about God.

POTTER: Add to that a new source of stress for many pastors in mainline Protestant denominations: as church membership dwindles they feel pressured to reverse the trend.

STEWART-SICKING: And a lot of pastors think that church growth is really the measure of their success, you know, and a lot of people are having to learn to deal with shrinking numbers, shrinking budgets, even closing churches.

REV. LYNDA FERGUSON (praying in home of church members): Lord, we thank you for your grace and your mercy today…

FERGUSON (praying in home of church members): …in Jesus’ name we pray. Amen.

POTTER: She’s the church’s only pastor—most Protestant churches have just one—ministering to a congregation of about 300. 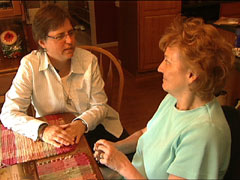 FERGUSON: Used to be the churches were filled, and now today we have to play a role of going out and bringing people into the church or actually taking the church to people.

POTTER: In the past three years, Ferguson has put 90,000 miles on her car, visiting the sick…

FERGUSON (praying with sick church member): I ask, Lord, that you would just fill her with your holy presence and that your healing power will just consume her body.

WOMAN (speaking to Rev. Ferguson): He brought a lot of joy into this world.

FERGUSON (speaking to church members): I appreciate you letting me be part of your life.

Clergy are different in that we are called to go to many dark places. We enter into sacred places with people, places that often are very difficult and, you know, we don’t do that from a distance. Jesus didn’t sit off in a corner and say “I feel your pain” from over here. Jesus very much reached out and touched, and he felt intensely for people, and we do, too, and so when you do that on a day-after-day basis, it is a lot of stress. 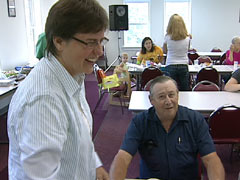 FERGUSON: I couldn’t do my job probably without my laptop and my Blackberry but I’m on call 24/7, 365 days a year. I receive probably an average of 30 to 35 phone calls a day, 60 to 70 emails a day, and just taking care of that takes a lot of time.

POTTER: Feeling called to serve, not to be served, Ferguson hid her stress from the congregation. She worked 60 to 70 hours a week for more than five years and took little time off. And then one Sunday night it hit her.

FERGUSON: I came into the parsonage, and I put my things on the kitchen table, and I sat down and I—my body, I just felt like I couldn’t move, and I just sat there, and I was emotionally and physically exhausted.

POTTER: For years, clergy stress was a little bit like the weather. Everybody talked about it, and nobody did anything. But now, more than 50 programs across the country are working to improve clergy health, from foundation-paid sabbaticals to peer groups and retreats sponsored by church pension plans. Here in the mountains of North Carolina, the Episcopal Church brings groups of clergy together for eight days to de-stress and re-center themselves. This program started a decade ago with one workshop. It’s now held more than 20 times a year.

Retreat leader: The official theme for today is “where am I going?”

POTTER: The sessions cover everything from finance to vocation, giving clergy who are often isolated in their work a chance to share their stories and learn from each other. 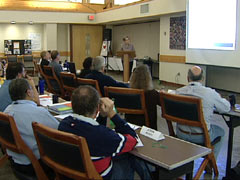 REV. JOHN THOMPSON-QUARTEY (St. Mary’s by the Sea, Point Pleasant Beach, NJ): I was left alone in a very large parish and I was doing everything, everything, all the six or seven services during the weekend, running to all the hospital, home visitation. The doctor said, “You must be stressed out.” I said, “You think?”

POTTER: For many, the session on work and meaning was revealing.

REV. NICHOLAS PORTER (Trinity Episcopal Church, Southport, CT): What this has helped me realize is that I’ve sort of been feeling starved in my primary position.

REV. KYM LUCAS (St. Ambrose Episcopal Church, Raleigh, NC): I realized that at work I spend the bulk of my time doing the things I hate and not the things that I love to do.

POTTER: Trying to do it all can take a toll on a pastor’s spiritual life.

THOMPSON-QUARTEY: I often carry the burden of being stressed from work because of such nasty emails and stuff, I bring it home, and I can’t even prepare myself to pray. 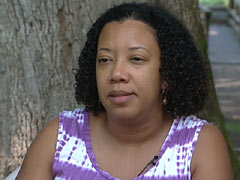 LUCAS: I felt like I had been burning the candle at both ends for a long time, for at least a year-and-a-half. And there was a part of me that felt a little guilty about taking this time, but I’m glad I did, absolutely glad that I did

POTTER: For Nicholas Porter, the retreat was a reawakening.

FERGUSON: That can be hard to remember when the stress of the job gets to be too much. Sometimes I’ll hear clergy, other clergy, not just Methodist clergy but other clergy, say to especially young people when they’re discerning a call to ministry, they will say to them, “If you can do anything else, do it.”

POTTER: After nearly collapsing from exhaustion and overwork, Lynda Ferguson finally took time off for a mission trip to Nicaragua and reset her priorities. She takes Fridays off now. Sometimes when her cell phone rings she doesn’t answer, and she’s lost weight in part by resisting the temptation to sample every dish at every church gathering.

FERGUSON (at church meeting): Bill caught me this morning running a little bit.

Church member: I saw you jogging.

FERGUSON: Just because I love the people, and I truly do, I cannot be there for everything, and they understand that, and they know that, and it is part of our job to set those boundaries, but it is very, very difficult to do so.

POTTER: Difficult, but essential for clergy to manage the stress that comes with the job and focus on the work they really feel called to do.

FERGUSON: There’s a lot of pressure that we put on ourselves as clergy because of what we’re doing, and we don’t want to let God down.