BOB ABERNETHY, host: On November 2, voters in Arizona and South Dakota decide whether to legalize marijuana for medical use, as 14 states and the District of Columbia already have. Meanwhile, in California, where medical marijuana is legal, voters are deciding whether to decriminalize recreational marijuana use. Is marijuana a gateway to harder drugs? Lucky Severson reports from Los Angeles.

BISHOP RON ALLEN (President, International Faith-Based Coalition, speaking in a church): It is because Satan has tried to make us think and have tried to make us believe that it’s nothing. Isn’t that just like the enemy? That it is less harmful than alcohol. Isn’t that how Satan comes in the back door to make you think that one sin is greater than another? You all have to say “amen.”

LUCKY SEVERSON, correspondent: It’s Sunday, so Bishop Ron Allen is guest preaching in church. Any other day of the week and he’ll be preaching the same message to anyone who will listen. Bishop Allen is president of the International Faith-Based Coalition, comprising what he says are over 4000 churches nationwide. His one mission is to teach drug prevention to church leaders, and more urgently to defeat Proposition 19, which would legalize marijuana in California. 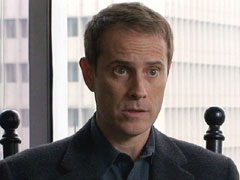 SEVERSON: Stephen Gutwillig is the California director of the Drug Policy Alliance, a nationwide organization working to change the focus of the war on drugs, especially state and federal laws prohibiting marijuana.

GUTWILLIG: Banning marijuana outright has fueled this enormous black market. It wastes hundreds of millions of dollars of law enforcement resources. It makes criminals of millions of otherwise law-abiding citizens. That makes it very, very clear that marijuana prohibition has failed at every single level.

ALLEN (speaking in a church): And today we are in a critical position in the state of California. We have individuals that want to legalize a schedule one drug: marijuana. And what they’re saying to us is that it’s not dangerous. I beseech you. Don’t sit at home November the 2nd. Go down to the polls and vote. 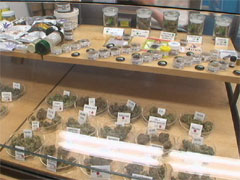 SEVERSON: In 14 states and the District of Columbia, medical marijuana is now legal and available in approved outlets like this. Other states are considering it. But at the same time as arrests for every category of crime have gone down nationwide, recreational marijuana busts are skyrocketing. The FBI says police prosecuted 858,000 individuals for marijuana violations in 2009, and almost nine out of 10 were for possession of an ounce or less. Most arrests are misdemeanors but still result in a permanent drug arrest record.

GUTWILLIG: Every independent body that has been asked to look particularly at what should be done with marijuana, the answer has always been we should probably regulate it the way we do alcohol and tobacco, both because it’s widely available and widely consumed and it’s going to lead to mass arrests. That’s why alcohol prohibition itself was a disaster in the 1920s and ’30s and why it’s regulated today—not because it’s harmless, but because the risks associated with it are only magnified with a prohibition that drives its consumption underground.

ALLEN: When we talk about prohibition of 1920s and 1930s, we cannot relate that to what we’re dealing with today at all.

SEVERSON: Allen says legalizing marijuana would simply add to the destruction drugs and alcohol have already caused in African-American neighborhoods.

ALLEN(speaking in a church): Here’s their mantra: Marijuana is as harmless as alcohol, and so what I’ve been offering them is a rattlesnake or a cobra. Which one is harmless? 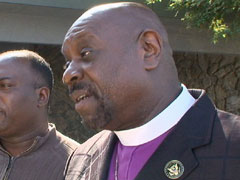 SEVERSON: Not every single law enforcement officer opposes Prop 19. Several former police chiefs and the National Black Police Association support it. So does the California Council of Churches and the California NAACP, where Alice Huffman is president.

ALICE HUFFMAN (President, California NAACP): I would like to see it approved across the country. I believe prohibition has failed us, and it is failing us now.

ALLEN: I have called constantly for the resignation of Alice Huffman as the state president of the NAACP for this one reason. If you want to be a civil rights leader, you have to understand this one thing. What causes the devastation in the colored community? It’s not rocket science, Lucky, we all know it’s drugs. 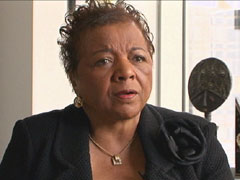 SEVERSON: There’s another reason the California NAACP supports Prop 19, and it was underscored in a recent study of marijuana possession arrests in California.

GUTWILLIG: Statewide, African Americans are arrested at more than triple the rate of whites, typically double, triple, quadruple in all of the 25 major counties.

SEVERSON: According to the study, if, as a case in point, you lived here in South Central Los Angeles, and you were African American, you were seven times more likely to be arrested and cited for possessing marijuana than if you were white. The gap may be even greater because studies have shown that blacks are less likely to use pot than whites. Bishop Allen says the disparity, in part, is because the police discover marijuana possession while in they are in African-American communities investigating other crimes.

ALLEN: If we can do something about the drug abuse and the crime in these neighborhoods, then maybe the police officers won’t get the call to go and arrest in that particular area.

HUFFMAN: One law enforcement person says yeah, we call your community the pond. We go down to the pond. That’s where we go, I guess, fishing is what he was implying, and that’s exactly what happens. It’s like they target our communities. 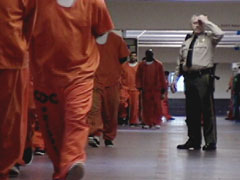 SEVERSON: National studies indicate that enforcing marijuana laws costs American taxpayers over $8 billion annually. The costs of pot arrests in California are estimated at over a billion a year.

GUTWILLIG: Police will always deny that there are such a thing as arrest and ticket quotas, but clearly these exist. Arresting, detaining, citing petty marijuana possession offenders are among the safest and easiest ways to meet those quotas.

SEVERSON: The greatest fear of opponents to Prop 19 is that marijuana is a so-called gateway drug, that smoking it will lead to other stronger drugs like crack cocaine or heroin.

ALLEN (speaking to congregation): They said to me that it’s not a gateway drug. I have to disagree with them. I can only talk about Bishop Ron Allen. When I started my seven years of crack cocaine my first experience with drugs was marijuana.

GUTWILLIG: The overwhelming evidence shows that the enormous majority of people who try marijuana or who even smoke marijuana regularly never consume any other illicit substance. It’s actually what’s referred to as a terminus drug. It is the only illicit substance that most people ever try.

SEVERSON: Governor Schwarzenegger recently signed a law reducing the fine for marijuana possession to that of an infraction, like a traffic violation. But Alice Huffman says it won’t do anything about the disparity of arrests, and it won’t stop gangs from running illegal drugs in black neighborhoods.

SEVERSON: Even if California voters approve Prop 19, US Attorney General Eric Holder says the government will continue to enforce federal marijuana laws. But without the help of state and local police that wouldn’t be easy, because they’re the ones who make virtually all marijuana arrests nationwide and in California. For Religion & Ethics NewsWeekly, I’m Lucky Severson in Los Angeles.