LUCKY SEVERSON, correspondent: The first thing an outsider might notice at the Universal School in Buffalo is how well behaved the students are. The chaos that sometimes erupts between classes at public schools is not to be found here. Universal is an Islamic school for students in pre-K through eighth grade. It’s one of 240 private Islamic schools in the country and is supported through tuition and fundraising. Kathy Jamil is the principal.

KATHY JAMIL (Principal, Universal School, Buffalo, NY): We hope to instill in our children what it takes to be a responsible, caring and giving person who is God-conscious, and we believe we can only do that if we develop a whole child. So we focus on academics, but it’s just one small part of everything else, because we actually feel if we can hit the other realms, we feel like the academics just skyrocket.

SEVERSON: God-consciousness, they say, is meant to be a constant state of awareness of Allah throughout the day. Tamer Osman directs the Islamic studies program. 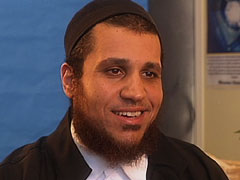 TAMER OSMAN (Director of Islamic Studies, Universal School): There are times when students are traveling in the hallway that maybe an adult’s eye may not be on them for just that moment. If they remember that God is watching, they may not do those type of things that we find in other schools, whether it is ridicule other students or bullying. We have a lot less of those types of things at the school here, and I think part of that reason is because we are trying to inculcate the idea of God-consciousness in the children.

SEVERSON: They are reminded of God five times each day during prayer. Universal is a state-accredited school so the students are taught the same curriculum as those in public schools and their test scores are on grade level or above. But here they’re also taught Arabic and Islamic studies, including the Quran and the sayings of the Prophet Muhammad. They learn about values from the teachings of the Prophet.

JAMIL: The Prophet, peace be upon him, as we believe, is the best of all mankind, and he embodied all the beautiful qualities and characteristics that we want to work on in our lives.

OSMAN: One of the wisdoms in Islamic schools today is that if you look at our core American values, they coincide with a lot of our Islamic values. 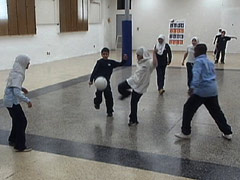 SEVERSON: Those shared interests apparently include the love of sports, like soccer, which is popular in many of the different countries these kids’ families emigrated from. But one of the challenges at Universal is to separate the religion from the attitudes of the culture they left behind—attitudes, for instance, detrimental to women.

JAMIL: I work with some domestic violence clients here in the US on relation to immigrant families and Muslim families and with the conversations that I have with the court systems, you will hear a man walk on, sit on the stand and say “I have the right to,” from a religious perspective, and we are there saying you absolutely do not. You clearly don’t understand your faith tradition.

SEVERSON: Islam considers homosexuality a sin, and in some Muslim countries the punishment is severe.

ALET SIAM (Eighth Grade Student, Universal School): Being gay is forbidden in Islam but you cannot make fun of that group or people who are like that. You’re supposed to be nice to everybody, but it’s still forbidden. You can’t do that.

OSMAN: As Muslims, we shouldn’t be judgmental. Just like in many of the other faiths it is frowned upon. It’s not seen as something that’s praiseworthy. But at the same time, it’s not—we don’t see it as if the person does that then that’s it, they are condemned forever. 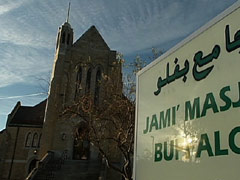 SEVERSON: The school found its home in an unlikely place—a former Catholic church and convent. Students from Universal and St. Monica Catholic School share interfaith programs throughout the year. Nancy Langer is with St. Monica.

NANCY LANGER (President, NativityMiguel Middle School of Buffalo): What I’ve noticed is that they don’t seem to look at each other and see any differences. They seem to accept each other for who they are, and they’ve become instant friends. It’s really wonderful.

SEVERSON: Universal opened its doors three days before the 9/11 terrorists attacks. Suddenly there were bomb threats. Police were patrolling the school—not a good time to be a Muslim in America, and it was perhaps the worst time to open an Islamic school.

SEVERSON: Ultimately they decided that keeping the school open presented an opportunity to reach out to the inner-city neighborhood that surrounds the school. Ray Barker teaches social studies. He’s not a Muslim but is impressed with the mission of the school.

RAY BARKER (Social Studies Teacher, Universal School): It is really looking at developing the whole person through a moral structure set up by the religion. It very much is creating a strong foundation for them for these years and the rest of their lives.

SEVERSON(speaking to students): So are you good all the time?

For some parents, learning good values was only one reason they wanted their children in a religious school. Even before she gave birth to her three kids, Maha Zaatreh didn’t care whether they went to an Islamic school or a Catholic school as long as it wasn’t a public school.

OSMAN: Prophet Muhammad, peace and blessing be upon him, he talked about how important gentleness was—that God is gentle, and he loves gentleness. At our school you would find it very rare that you’d have a teacher raise their voice.

SEVERSON: They may not raise their voice but they do achieve discipline. Listen to Alet and Hakim.

ALET SIAM: You know that room downstairs right before you come up here, the library? In there you spend the whole day with the guy at the desk downstairs, Brother Jabor. Oh, man, he can give some punishments. 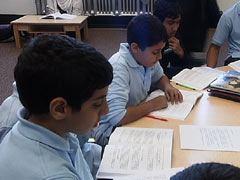 HAKIM ARMAN: He gives us all this writing to do. Sometimes, like last year, there was the other hall monitor. They’re kind of strict. If you walked down the wrong way, they make you walk up and down like 80 times.

ZAATREH: It gets me worried to know the fact that when my daughter is a teenager, she’s going to start thinking, “I want to date, I want to go here, I want to go there.”

SEVERSON: She needn’t worry about Universal. Dating is not allowed here for a host of reasons. Some are found in the Quran’s views on chastity when it refers to Miriam, whom Christians call Mary, the mother of Jesus.

OSMAN: In the Quran God uses Miriam as the example for our young girls, on how he had so much love for her because of her chastity, because of her modesty before God, because of her purity and her internal beauty, and that’s all part of it. We don’t want to necessarily come down on them and say dating is bad, dating is bad. Rather, we want to tell them how positive a healthy family is.

SEVERSON: Why do you think it is that they don’t want you to date? 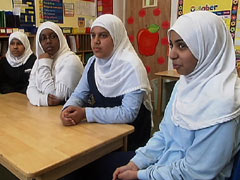 SEVERSON: Values are enforced and behaviors like gossip and bullying strongly condemned. Bullying is a very real and personal concern for these students. Some come looking for a safe environment.

(speaking to student): Why were you bullied?

HAKIM ARMAN: I was bullied because I’m Muslim. I got like punched a couple of times.

SEVERSON: Girls who wear the head scarf, the hijab, often feel the insecurity of being the object of stares, of being different. Some wear their hijabs only at school. Others wear them as a badge of honor.

KHADIJO ABDULLE (Eighth Grade Student, Universal School): I started wearing hijab when I was little in first grade. I have been wearing it since then, outside even, and people just used to look at me, and then I used to have to act like them and I didn’t want to do that. I wanted to be me.

SEVERSON: So it made you feel bad.

(speaking to students): Do you think Muslims get a bad rap in this country?

FADUMO MOHAMMED (Seventh Grade Student, Universal School): Because they don’t know who we are.

MIRIAM AHMED (Eighth Grade Student, Universal School): If they see the truth, it’s very obvious that we are good people.

SEVERSON: Universal started with 17 students. Today they have over 100. The eventual goal is to expand Universal to include high school.