SIDLIN: Don’t move, don’t move. Very nice. What you’re doing is very nice, and there’s no room for that. It has to be extraordinary—the sort of thing that you will remember all of your lives.

FAW: Whenever he can Murry Sidlin urges them to do more, because what they are rehearsing, what they are trying to commemorate, is another performance by another choir in horrific circumstances: Jewish prisoners in a Nazi concentration camp.

SIDLIN (speaking to singers): To us it’s just damn words. They leave the rehearsal and walk over bodies to get back to their barracks. We cannot be indifferent. 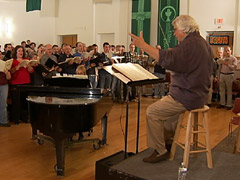 FAW: This music, Verdi’s lyrical Mass for the dead, is a full-throated testament to the majesty and judgment of God, profound even in this rehearsal at Washington’s Kennedy Center. But it was perhaps never more powerful or poignant than its performance on June 23, 1944 in the concentration camp, Terezin, just outside Prague. When Jewish prisoners sang the requiem to their Nazi captors, that Catholic Mass, says Terezin survivor Vera Schiff, gave prisoners a way to defy the Nazis.

VERA SCHIFF: The text of the Latin prayers suggests that we all will be judged by the Almighty, and this will include the Germans. That was a promise. That the day will come in which we all will be facing the final judge, and that gave us a great deal of satisfaction and hope.

SIDLIN: It was cathartic, therapeutic, and important for them to remain dignified. They responded to the worst of mankind with the best of mankind. This is our way of fighting back.

FAW: In the cold, filth, and misery of a camp like this, a Romanian-born conductor, Rafael Schaechter, gathered 150 fellow prisoners, and in a dank basement with just one score and a broken piano taught them by rote Verdi’s sublime work. Choir member Edgar Krasa says Schaechter was extraordinary. 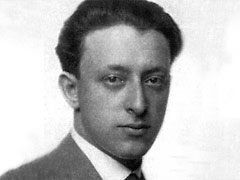 EDGAR KRASA: Socially he was a wonderful person, but once he sat behind the piano he was a real tyrant.

SIDLIN: The survivors who sang in this chorus say—said to me that when he started work on the requiem, and this is a quote, “he was like a crazed man on a mission.” He began to say things to them such as, “We can sing to them what we cannot say to them.”

FAW: Through the words in this Catholic liturgy, a Jewish chorus could stand up to the Nazis by letting them know what ultimately matters. Nazi propaganda films were made at Terezin to give the false impression Jews were happy there, well fed and cared for. When officials from the International Red Cross visited, things were spruced up even more. The Nazis asked Rafael Schaechter to perform that requiem for their guests. They probably couldn’t understand the Mass sung in Latin, but Schaechter and his choir understood exactly what they were doing.

SIDLIN: Here I can really make a difference—and not to all mankind. To myself, to my friends, to my colleagues, to my family I can make a difference. I can sing what I can’t say. I can respond in the best possible way to the unspeakable horror in which I find myself.

FAW: Performers could be deported to the gas chambers at Auschwitz, warned Jewish elders in the camp, if the Nazis understood the lyrics. So Schaechter gave his chorus a choice. 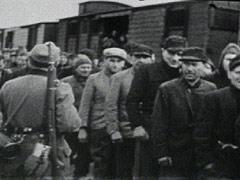 KRASA: He told us about the danger and said if you—whoever is afraid, there is the door, and you can go. Nobody left.

FAW: No one left?

FAW: The lyrics of the requiem and their hidden meaning were the source of the prisoners’ defiance. The second and longest movement, for example, tells of the day of wrath—Dies Irae: “The day of wrath, that day will dissolve the world in ashes. How great will be the terror when the judge comes” is how the Latin is translated.

SIDLIN: It’s very simple. God’s in charge of humanity, and if anybody fools around with that they’re going to hear from God.

FAW: Or take the final section—Libera Me. 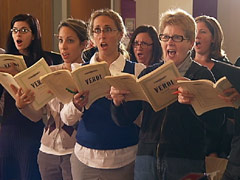 FAW: The singing of Verdi at Terezin had a profound impact on the prisoners and singers, like survivor Marianka Zadikow-May, speaking recently at a symposium.

MARIANKA ZADIKOW-MAY: We wanted to be liberated and just hope that there is a loving Hashem in heaven who will hear you and liberate you.

SCHIFF: It was part of the defiance, to keep up our spirits, to keep us in a frame of mind you want to live, you want to live another day. That was helping over the hunger, over the illnesses and deprivation, and that carries you a long way under the circumstances when we feared for our life day by day.

KRASA: We felt great because otherwise we had no opportunity to show the Nazis that we don’t, we’re not afraid of them.

FAW: Schaechter conducted Verdi’s Requiem 16 times at Terezin. After the final 1944 performance, he and most of the chorus were shipped off to the gas chambers at Auschwitz. For the few survivors, remembering brings pain and pride.

SCHIFF: I think it brings back twofold emotions: the emotion of course of sadness, because in my case I’ve lost all my entire family. But simultaneously I think I find that it was a great achievement of what people can do under unimaginable circumstances.

FAW: When the requiem ends in the multimedia concert Murry Sidlin created to commemorate Terezin, the mournful wail of a train whistle sounds, and as the audience watches film of Jewish prisoners being transported to Nazi crematoriums, one solo violin plays an ancient Jewish song which the condemned sang on their way to death—a haunting tribute to Terezin, where in defiance there was affirmation, indeed a kind of triumph.

For Religion & Ethics Newsweekly this is Bob Faw in Washington.