LEONARD DINNERSTEIN (Department of History, University of Arizona): People don’t like “the other” and in times of crisis, in times of great discontent, the minority group de jour is victimized as being the source of all the problems and also they have lower status so you can dump on them and most of your contemporaries agree with you.

High school students at demonstration: Our education is under attack. What do we do? Fight back.

LUCKY SEVERSON, correspondent: These high school students feel dumped on. They are protesting a new Arizona law that would cut the Tucson school district’s budget by $36 million a year if the district doesn’t stop the way it’s allegedly teaching its Mexican-American studies classes. State superintendent of public instruction Tom Horne wrote part of the law himself.

TOM HORNE: It says that you can’t have courses that are designed primarily for students of a particular ethnicity or that arouse resentment against other ethnicities. That’s the essence of it. 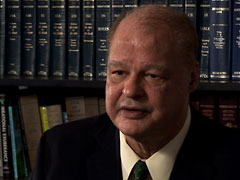 SEVERSON: The law also says ethnic studies classes cannot advocate ethnic solidarity or teach the overthrow of the US government. Horne was just elected Arizona attorney general after eight years as the state’s school chief. Each year he says he became more determined to shut down Tucson’s ethic studies program.

SEVERSON: His primary witness against Tucson’s Mexican-American studies program is John Ward, who taught the class back in 2003 until, he says, he was pushed aside and eventually quit. Ward is Hispanic himself.

JOHN WARD: I think clearly their purpose was to create the next generation of ethnic radicals who could hit the pavement. They simply wanted to spread this message in a fertile classroom.

HORNE: They teach kids that they live in occupied Mexico, that the United States is run by a clique of white racist imperialist people that want to oppress Latinos. 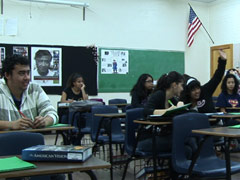 SEVERSON: Abel Morado is the principal of the Tucson Magnet High School.

ABEL MORADO: If he believes that we are putting kids in a position to mistrust their fellow student and the authority figures in their life, then there’s not much I can say about that other than to say, well, you may be describing a program, but you’re not describing this one.

SEVERSON: Julio Cammarota is an associate professor of Mexican-American studies at the University of Arizona, where the faculty senate unanimously approved a resolution calling the law “distasteful” and “disturbing.” He says Horne has never attended an ethnic studies class in eight years.

JULIO CAMMAROTA (College of Education, University of Arizona): If he came to the classroom he would see that the classrooms are diverse. Students spend quite a bit of time learning how to respect each other’s cultures and cultural differences, so there is not this idea that one culture is superior to another, and that’s what he’s sort of implying, that there is cultural superiority of one group over the other. That’s ridiculous.

SEVERSON: This is a Mexican-American studies class at one of six high schools in the Tucson district. The class focuses on history and current affairs. The subject on this day was Native American Indian history. The teacher is Maria Frederico Brummer. 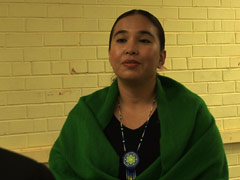 MARIA FREDERICO BRUMMER: I think it’s important for every one of our students to be strong citizens and knowing that they have a commitment to democracy, and part of that commitment is knowing exactly where our country is coming from, our history. Some of it might be negative and it’s our responsibility not to repeat any part of that negative history again

SEVERSON: Superintendent Horne says the classes are dividing kids by race, but not all the kids in this class were Hispanic, who make up over 60 percent of Tucson’s high school students. This is 15-year-old Shelbi Plank.

CAMMAROTA: And they’re not by far the best students at the school, but because of these courses they tend to do better than their peers at their school. They end up doing better. They end up scoring better on standardized tests, they end up graduating at a very high rate, they end up going on to college.

SEVERSON: Superintendent Horne disagrees with just how successful the program has been, but it does seem to have created some enthusiasm with the students. This is sixteen- year-old Carmen Camacho. 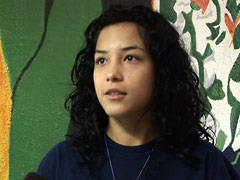 SEVERSON: Why do you love it?

SEVERSON: John Ward thinks the part of the new law that prohibits teaching the overthrow of America is not overreaching.

(speaking to John Ward): Do you think they were actually teaching that in these classes?

CAMMAROTA: That’s treason, and we wouldn’t be teaching students to overthrow and be traitors of their country. We actually teach students to actually love the country, love to be here and be able to participate and contribute to this country.

SEVERSON: The turmoil here in Arizona over Hispanic issues like immigration and ethnic studies can be found in states throughout the US. In 2009 alone, over 200 state laws were passed aimed primarily at undocumented Hispanics. Ten states are now considering legislation fashioned after Arizona’s tough immigration law. It is, as they say, a hot-button issue. 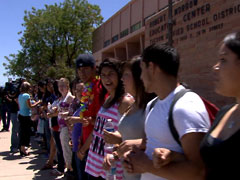 Leonard Dinnerstein is an author and retired history professor at the University of Arizona. He says historically the finger-pointing in Arizona and other states, mostly directed against Hispanics, is nothing new.

DINNERSTEIN: So if you want to go through history with the ethnic groups, when the Scots Irish came, in colonial America they sent them out to the frontier because nobody wanted to live near the Scots Irish. They were irascible. The biggest prejudice in this country aside from anti-black and anti-Indian was anti-Catholic.

SEVERSON: He says one of the factors in today’s climate is that people feel vulnerable and fearful.

SEVERSON: One of the states considering an immigration law like the one in Arizona is Utah. But recently a group of civic and religious leaders created a compact http://utahcompact.com/ asking the legislature to consider more humane legislation. The Mormon Church supports it. So does Catholic Bishop John Wester.

REV. JOHN WESTER (Bishop of Salt Lake City and Chairman of the US Conference of Catholic Bishops Committee on Migration): My hope would be that religion can encourage people to look into the issues for themselves and to take a proactive, responsible position. All of us have a responsibility as citizens to weigh in on this and to be informed, not just to believe what you hear necessarily next door, but to really look into the issues, and then to really, to put a human face and to ask the question why are the immigrants here? What is it that’s driving them here? What do we need to do to solve this question? It’s a very complicated question.

SEVERSON: While the grownups fight it out in Arizona, the kids who attend ethnic studies are learning how democracy works.

CAMACHO: The government needs to really see what this class is about, and not just talking and saying, oh, it’s just, you know, negative stuff, because it’s not.

SEVERSON: Tucson educators say they don’t intend to change the way they are teaching because, they say, they’re not teaching anything wrong. Several have filed a suit against Superintendent Horne. The new law takes effect December 31.