KIM LAWTON, correspondent: At the First United Methodist Church of Pasadena they’re rehearsing for the annual Christmas pageant. There’s been a pageant here done by the children for as long as anyone can remember. The scripts vary from year to year, but the basic storyline never changes. It’s about the birth of Jesus.

LAWTON: The Christmas pageant is a tradition that is being played out by congregations across the spectrum this holiday season and it has for generations. The pageants run the gamut, from small Sunday school programs to large-scale Broadway-style productions. There’s usually a choir or some kind of singing. Sometimes the participants are adults, but more often than not the pageant is performed by the children and documented by proud parents who these days are likely to post the video on YouTube or Facebook. 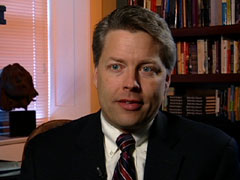 John Witvliet is professor of music and worship at Calvin College in Michigan. He says the Christmas pageant is one way that churches actively connect with their history.

PROFESSOR JOHN WITVLIET (Calvin College, Grand Rapids, Mich.): It’s participating in something that has gone on over time, a story that’s been told for 2000 years, children who participate in a pageant just like their parents or grandparents did.

LAWTON: Interest in the circumstances of Jesus’ birth goes back to the earliest days of Christianity. The story as described in the Gospels was depicted in icons and other religious art. In medieval times, the Nativity story was enacted on traveling wagons as part of religious dramas about the life of Jesus. Saint Francis of Assisi is credited with popularizing the tradition. In a candlelit Christmas Eve service in 1223, he staged a reenactment of Jesus’ birth, and he included live animals, a tradition many churches continue to this day.

WITVLIET: What historians are a little less clear about is when Christmas became such a child-centered celebration and when kids were involved in these dramatic reenactments in a significant way. 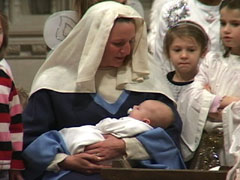 LAWTON: At the heart of the Christmas pageant is a fundamental tenet of Christianity called the Incarnation, the belief that God took on human flesh in the form of Jesus and was born as a baby.

WITVLIET: This is not a story of the high and mighty. It’s a story of the humble origins of Jesus and ultimately of, as Christians understand it, a God who chooses to work through very humble, ordinary means.

LAWTON: Witvliet says it’s a story with universal appeal. Nativity dramas can be found all over the world.

WITVLIET: What’s wonderful is the way that different cultures bring their own insights to bear on telling the Christmas story.

LAWTON: But it can be a challenge for churches to come up with fresh ways to approach the familiar story year after year. This year’s pageant at First United Methodist is from the perspective of animals that might have been there when Jesus was born. 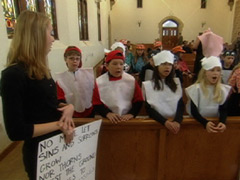 ZOE PEREZ: The animals are all squabbling, and then the wise old donkey just like told them that they had a gift to give to the birth of baby Jesus.

LAWTON: Zoe Perez has been in several pageants. Last year she was a shepherd. This year she and her friend, Maggie Cole, have dual roles. They are birds, and they are also sheep.

MAGGIE COLE: I think it is important to have pageants because they’re fun. They don’t take a lot of practicing, well at least ours don’t, and they always turn out really good.

LAWTON: Director Pam Marx believes embodying the characters helps, in her words, “burn the story” into the children’s brains. The actors agree.

LAWTON: Marx says it’s not always a perfect production but, she adds, it always seems to work. 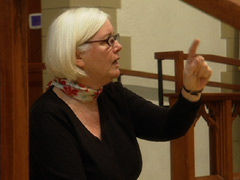 PAM MARX: Remarkably enough it comes together, and I would say there are times when it’s been a greater miracle than others, but it’s always a miracle to me that somehow, wow, they told the story again.

WITVLIET: I sometimes think it’s in the lines that are forgotten and the bathrobes that the shepherds put on and in the halting rendering of these Christmas songs that are not always sung perfectly in tune that some of the beauty of the Christmas message is depicted and shown.

GARA: There are always the faces that we can’t help but smile and feel warm about when we have all these hard places inside as adults. The children soften us in the telling of the story. The story of the telling of a baby child, of an infant, is something that warms everyone.

LAWTON: But Witvliet cautions that warmth and fuzziness shouldn’t overwhelm the ultimate spiritual message of Christmas. 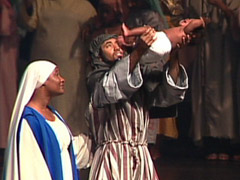 WITVLIET: There’s always danger in even in a variety of Christmas celebrations and pageants that at the end of the day the kids pick up a message that is ultimately sentimental. So there is a challenge for adults and those who mentor children to point them in a deeper and better direction.

LAWTON: The message is what it’s all about at Evangel Cathedral in Upper Marlboro, Maryland, and so they do their pageant up big. The church calls this a Broadway-style production that includes the modern day, the Victorian era, and biblical times. There are live animals such as sheep, donkeys, alpacas, and yes—camels in the sanctuary, too. This year’s twentieth annual pageant has a cast of over 200, including some of the biggest names in Gospel music like gold record artist Marvin Sapp and Grammy-award-winning superstars Yolanda Adams and Donnie McClurkin.

DONNIE MCCLURKIN: Because the story is an age-old story it can, you know, we’ve heard it in so many different forms and different ways, but here the production behind it makes this thing become alive, makes it more than just one-dimensional. You can see, you can feel, you can hear, and it brings you into another place when you are watching it.

LAWTON: Congregation members here see the Christmas pageant as an opportunity to reach out to the community and share their faith, and that’s why these artists wanted to be part of the project.

LAWTON: And from the smallest children’s program to the biggest extravaganza that’s the ultimate story of the Christmas pageant. I’m Kim Lawton reporting.