LUCKY SEVERSON, correspondent: His name is Fethullah Gülen. He is a 69-year-old Turkish Islamic scholar and author, apparently in poor health, who came to the US seeking medical treatment. He lives a secluded life at a retreat in Pennsylvania. So why was he voted by his admirers in a survey by Foreign Policy magazine as the most significant intellectual in the world? Among those admirers are Kemal Oksuz and Alp Aslandogan.

KEMAL OKSUZ (President, Turquoise Council of Americans and Eurasians): Kind, modest, humble, generous. We see him as a source of information, inspiration, but never prophet. He would be the one who would be troubled the most if he hears that followers or inspirers see him kind of prophet.

ALP ASLANDOGAN (Institute for Interfaith Dialogue): Personally, he is definitely very knowledgeable, very sincere in wanting the best for the people—not just Turkey, but for all humanity.

SEVERSON: Gülen has inspired his followers to build schools, provide humanitarian aid and engage in interfaith dialogue. University of Houston Professor Helen Ebaugh, who wrote a book on the Gülen movement says the movement got its start when Gülen was an imam in Turkey. 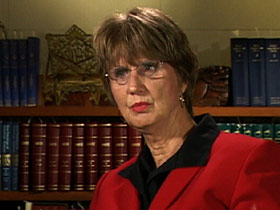 PROFESSOR HELEN EBAUGH (Dept. of Sociology, University of Houston; Author of “The Gülen Movement”): When Fethullah Gülen began preaching in the late ‘60s and early ‘70s in Turkey, his message was we don’t need more madrassas. We need schools that would promote science and math and secular subjects, and his contention was that one can be modern and one can be scientific and still be a good Muslim.

SEVERSON: Bill Martin is a senior fellow in religion and public policy at the James Baker Institute at Rice University. He says the Gülen movement is different from fundamentalist Islam because they respect all faiths and believe religion is compatible with science.

WILLIAM MARTIN (Senior Fellow, James Baker Institute at Rice University): I think it’s fair to say that Islam has had difficulty in coming to terms with modernity, and in that I think that the Gülen movement offers a much more positive picture of what Islam can be.

SEVERSON: Gülen-inspired volunteers from Turkey bring Turkish language and culture with them. In Houston they sponsor a Turkish Olympiad where American students compete in Turkish dance and song. The winners compete in an annual competition in Ankara, Turkey. There are more than a 1000 Gülen-inspired schools and universities in over 100 countries. 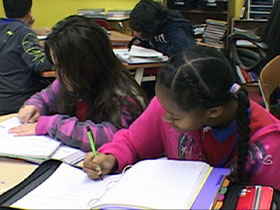 OKSUZ: Education helps you overcome ignorance, poverty, corruption, hate, extremism, racism, whatever, all the illnesses of the society. Because of that education is very important.

SEVERSON: In Texas there are 33 nationally recognized public charter schools with over 16,000 students grades K through 12. They’re called Harmony schools, and the Turkish superintendent insists they are strictly secular and in no way connected to Gülen. Professor Ebaugh says there’s a reason for this kind of sensitivity.

EBAUGH: I think a lot of that is related to the Islamophobia that exists in this country. I think there is a lot of fear that Islam is trying to take hold of this country and countries around the world—that it’s trying to spread itself.

SEVERSON: About 60 percent of the kids in the Texas Harmony schools come from disadvantaged neighborhoods. The schools say they have a 100 percent graduation rate. No wonder there are 21,000 kids on the waiting list.

MARTIN: I think the Harmony schools are an outstanding example of what the Gülen followers have been able to accomplish in particular with respect to education. Of the three high schools that had graduating seniors this year, only three students had not already been admitted to a four-year college at the time of graduation. 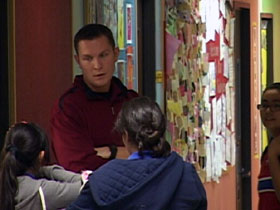 CHUCK LAMBERT (Teacher, Harmony School of Innovation): They know our expectations for them. Through kindergarten all the way through high school, they know this is a college school. Our goal is to get you into college.

SHARON QUINILTY (Teacher, Harmony School of Innovation): I have never worked harder. But you really see the results. Because the parents are very involved, the kids really respond.

SEVERSON: Supporters say Gülen owns nothing himself but has persuaded others to give generously to many independent organizations.

EBAUGH: The movement has become quite wealthy. It’s one of the richest movements in Turkey. It has private hospitals, it has all these private schools. There’s a big media industry, one of the biggest in Turkey. It has the Zaman newspaper. Kimse Yok Mu is one of the latest. That’s their relief organization. They help disaster victims all over the world. 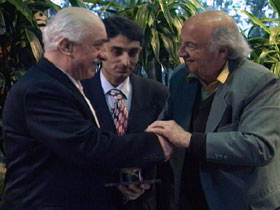 SEVERSON: Kimse Yok Mu and in the US Helping Hands contribute millions of dollars in humanitarian aid each year. Professor Ebaugh says in Turkey Gülen urged businessmen to grow their businesses and give a part of their earnings, as much as a third, to support humanitarian aid and education.

EBAUGH: The movement is financed not only by these wealthy businessmen, but more importantly it’s financed by everybody in the movement. Everybody contributes, and the average seems to be about 10 percent.

ASLANDOWAN: I go beyond the expected level in my income level. For all of this my motivation is that just like God loves us as human beings we also should act in a manner that is pleasing to God. And I believe that all of these actions—charitable donations, volunteerism—are pleasing to God. That’s why I’m doing all of this.

SEVERSON: Alp is a volunteer in charge of the Institute for Interfaith Dialog in Houston, which is located in the Raindrop Turkish House. This is a mockup of the projected interfaith center, which will include a Jewish synagogue, a mosque, and a Christian church. Gülen has always stressed the importance of interfaith dialogue to promote peace and has met with Pope John Paul II and reached out to leaders of many religious minorities. And he may have been the first Muslim leader to condemn the 9/11 terrorist attacks.

ASLANDOWAN: He immediately posted an ad clearly saying that this was an anti, a non-Islamic act. It’s not even a human act. The people who committed this are not Muslims; they can not even be called humans. He said Bin Laden is a monster and people around him are monster if they think like him. 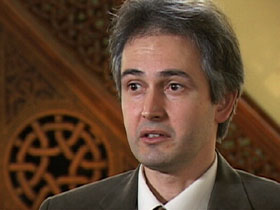 ASLANDOWAN: Some people try to justify the killings, homicidal killings, by saying that those people who are engaged in those, they don’t have any other means, and he said that this is not a Muslim’s view. It cannot be a Muslim’s thinking, because for a Muslim if the end result, if the end goal is virtuous, worthwhile, holy, then the means should also be holy.

SEVERSON: Professor Ebaugh says the movement could do better by placing women in leadership roles. Gülen is not without his critics.

EBAUGH: The big issue in Turkey for the critics is the fear that the movement is becoming very powerful, very wealthy, and that there is a sub rosa agenda to create an Islamic state, and they always compare it to Khomeini and Iran.

MARTIN: I think there’s no warrant to the charges that Gülen wants to take over and impose Sharia law. I think that, frankly, is an absurd fear.

OKSUZ: The movement is neither sect nor cult. It is a civil society movement.

MARTIN: Sometimes they are accused of being a missionary, a missionizing entity. As far as I know, I don’t know anyone through the schools or otherwise that they’ve tried to turn into a Muslim.

SEVERSON: For the time being, those who follow Gülen, both critics and admirers, seem to agree that he is leading one of the most important movements in Islam.