BOB ABERNETHY, host: This past week in Congress, Democratic Congresswoman Carolyn McCarthy of New York introduced a bill that would ban the sale of all gun magazines that can hold more than 10 bullets. The clip used in the Tucson shootings held 30. But as the popularity of gun shows suggests, any attempt to tighten gun laws faces strong opposition. Republicans control the House of Representatives, and no Republican supports the McCarthy bill. One man who understands the politics of gun legislation is Paul Helmke, president of the Brady Campaign Against Gun Violence. He’s a Republican and was three times elected mayor of Fort Wayne, Indiana. Welcome to you.

ABERNETHY: So what are the realities on this? A bill has gone into the House. Another one’s going into the Senate next week. But realistically does either one of them have any chance?

HELMKE: I believe they do. I think this time it could be a different response. 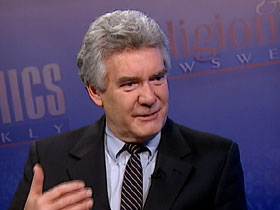 HELMKE: For a number of reasons. It was a member of Congress that was attacked. That’s one. Secondly, the bill that we’re talking about relates directly to the Tucson shooting. The individual was stopped, not because the police responded or someone else with a gun responded. He was stopped because the clip ran out of bullets. If he had run out of bullets after 10 instead of 30, less people are injured. And the other thing is this showed how weak the laws on the books are. No law was broken. Even with his dangerousness to his fellow students, no law was broken until he pulled the trigger the first time. So I think this time they might treat this not as a Second Amendment wedge issue. They might treat this as a public safety issue, and just as they banned cop-killer bullets and plastic guns that don’t show up in metal detectors, maybe they’ll say these high-capacity clips should also be banned.

ABERNETHY: But isn’t it the case that the overwhelming majority of the American people, who the people in Congress are supposed to represent, feel that any restriction on gun ownership is wrong?

HELMKE: And that’s not true. Actually, the one poll that sometimes is used to say support for gun control is dropping say that now only 46 or 50 percent support stronger measures as opposed to 75 percent 15, 20 years ago. But that’s still showing that a number of people support in general gun control, and when you ask about specific measures, even licensing people to have guns like we license drivers—66 percent support. Background checks on all sales, restrictions on semi-automatic weapons, those things have strong support when you ask the individual questions. 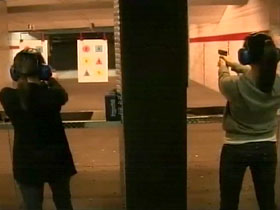 ABERNETHY: When you ask the individual. And how about the McCarthy bill?

HELMKE: McCarthy bill, we’ve polled it three different times. Fifty-eight percent support it. Fifty percent of the American people strongly support it. It’s hard to find that kind of intensity for any kind of question.

ABERNETHY: This past week there was the announcement of a coalition of something like 24 religious groups to support some kind of gun …

HELMKE: Faiths United to Prevent Gun Violence was announced this last week on Martin Luther King Day. The next day they were part of the news conference supporting Carolyn McCarthy’s bill. And I think this is important. This is part of what’s going to change the dynamic. We need leadership from the top, from the president speaking on this. But more importantly we need our people in the communities telling their elected officials do something about gun violence, and the faith community plays such an important role in raising the moral issue, raising that issue with their congregations, and getting people to speak up.

ABERNETHY: After the Tucson shootings there was some comment about gun control from some people in the religious community, but there was an awful lot of silence, too. Did that disappoint you? 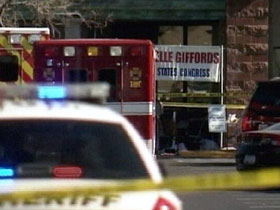 HELMKE: Silence from anybody is disappointing, and I think you know with some people it’s always wait until folks are out of the hospital, wait until the funerals are over. But I keep telling people this is an issue I talk about every day. I say the same thing every day, and we need more people saying the same thing. To allow 30,000 people to be killed by guns every year in this country, another 70,000 to be injured by guns every year in this country, to have this almost worship of guns that occurs and the violence that flows from that is something we shouldn’t be tolerating in our society.

ABERNETHY: But for you personally, is this a religious issue?

HELMKE: It does fit into my religious tradition. I went to a Lutheran grade school growing up. We talked about nonviolence. The story of the garden of Gethsemane is put down that sword, you know, is what Jesus is telling the disciple. That’s the lesson we need to learn, and it really gets into how do we relate to our fellowman? Do we live in a state of fear of everyone we’re dealing with, or do we feel that we’re a community of faith and that you respect the other, that you deal with the other, or do we bring a gun to every confrontation?

ABERNETHY: But isn’t it the case that there are a lot of religious people who very much like guns, too?

HELMKE: And I’m not anti-gun. I’m not against the gun. But what the gun does to so many people, making that gun so easily available to dangerous people, like the Tucson shooter, irresponsible people. You know, we all sin and fall short of the glory of God. We need to restrict the easy access to this. Again, even Carolyn McCarthy’s bill isn’t talking about the gun. It’s talking about the high-capacity ammunition that’s not used to hunt, not used for personal protection, only used to kill a lot of people quickly.

ABERNETHY: Paul Helmke, president of the Brady Campaign Against Gun Violence. Many thanks.

Gun Violence and the Faith Community