BOB ABERNETHY, host: President Obama explicitly singled out US Muslims in his State of the Union address Tuesday (January 25), saying they are part of the American family. Throughout his speech, the president called for a new era of cooperation. Several times, he noted the nation’s religious diversity:

President Obama: “We believe that in a country where every race and faith and point of view can be found, we are still bound together as one people; that we share common hopes and a common creed.”

ABERNETHY: Our managing editor, Kim Lawton, has been following religious reaction to the president’s address. 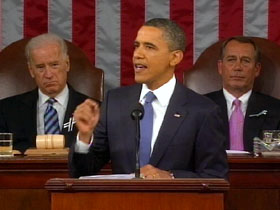 KIM LAWTON, managing editor: I actually moderated a conversation for our Web site with religious people giving their reactions to the address. I’ve heard from and talked to many others, and a lot of their reaction did split in predictable partisan lines. Those who support the president were more positive; those who don’t weren’t. That was predictable. But one thing that struck me was among conservatives and liberals I heard disappointment that there wasn’t more attention on the poor. The president never actually said “the poor,” but when he was talking about all of the budget problems and possible cuts, he did mention he didn’t want to do that on the backs of the most vulnerable in the nation. But this is an area that a lot of faith-based groups are concerned about when we’re talking about making big cuts and dealing with that. How is that going to affect the poor and the marginalized? And so those are going to be some big battles coming.

ABERNEHTY: “The least of these.”

ABERNETHY: And what about the language?

LAWTON: Well, I heard some disappointment from many fronts, again both liberals and conservatives, that the president didn’t use more moral language, spiritual and moral terms, even when he was talking about some of the problems facing the nation. He didn’t say it’s the right thing to do to balance the budget or to be accountable or responsible for your money. He didn’t talk about that when he was talking about clean energy. He didn’t say “caring for the environment,” which is language a lot of faith groups like to hear. Some people say, well, this is a State of the Union address. It’s a legislative package, and that’s not the place for that kind of language. Certainly the president used a lot of theological language in his Tucson speech, but for many faith people, they like to hear that kind of language in every speech, and they did find that missing.

ABERNETHY: And beyond language, important as that is, is a kind of point of view. Yes, we need a lot more attention to math and science, but no less attention to poetry and preaching and art—all the arts and all the humanities part of it.

LAWTON: Well, a lot of faith communities do talk about some of those intangible things. What makes America great? Is it just economy or military? Is there something else, something deeper, something that more perhaps reflects the soul of the nation? And I do think that for a lot of faith-based groups they think that those kinds of things should be included in a State of the Union.

ABERNETHY: More than what just can be measured. Kim Lawton, many thanks.