DE SAM LAZARO: Microlending began in the nonprofit world as a means to help poor people start enterprises that would make them self-sufficient.

VIJAY MAHAJAN (Founder, BASIX): We were from the world of development, and we spent a frustrating number of years trying to get small amounts of credit for poor people. Then there’s a limit to how much you can do as a nonprofit, and then eventually we restructured as for-profit.

DE SAM LAZARO: In less than decade, microlending grew into a seven billion dollar industry. One company, SKS Microfinance, raised $350 million in an initial public stock offering. Salesmen from various new companies fanned out into rural areas like this village in the southern state of Andhra Pradesh, offering money to people, no questions asked. 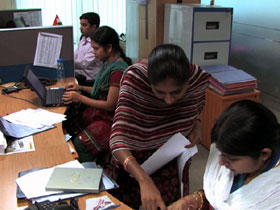 VILLAGE WOMAN: They came to us continuously for 10 days, and they offered loans. They said we will give you loans and you can pay them back in easy installments. It’s not a hard thing.

DE SAM LAZARO: No sooner had one company’s agents left than another’s would arrive. The goal, critics of these companies say, was to increase the volume of loans so as to attract or impress the big investors, even though many borrowers earned barely two dollars a day as agriculture laborers. Almost all of these women say they were coaxed into several high-interest loans ranging from $500 to $1000.

MARIA POLEPAKKA: I have loans from three different companies, about $700 in all. I use the money from one to pay off the others, and I’ll continue to do that until I can’t any more, and then I’ll stop making the payments.

DE SAM LAZARO: That won’t be easy, say others who’ve fallen behind. Pula Polepakka, a mother of two small children, says even though she and her husband had four loans they stayed current for three years. But they missed three weekly installments after her husband, a house painter, took ill. “The collection boys,” as she calls them, began to hound them. 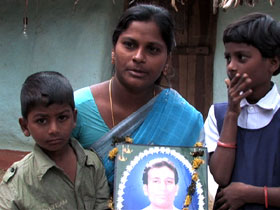 PULA POLEPAKKA: We left for another village where we have relatives, but the collection boys tracked us down in that village, and we were humiliated. He didn’t say anything about committing suicide. He just went far away and took his life.

DE SAM LAZARO: Her husband’s suicide late in 2009, and those of several dozen other borrowers, gained the attention of media, politicians, and government regulators like Subramanyam Reddy.

DE SAM LAZARO: Last October, an ordinance written by Reddy was approved by the state’s legislature. It mandated credit checks, monthly instead of weekly installments, and it outlawed unfair collection practices that Reddy says also jack up administrative costs and interest rates to usurious levels. He says those rates are never fully disclosed to unsuspecting, often barely literate clients.

REDDY: If you really calculate, it comes to about 35 percent, about—the percentage of interest. So there has to be a lot of disclosure, that’s the first fundamental thing. They employ a number of unlawful elements to do their recovery. 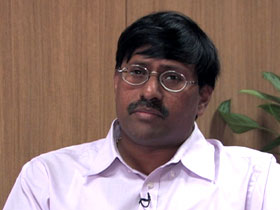 Television news broadcaster: As the ordinance from the government would propose….

DE SAM LAZARO: Meanwhile, opposition political leaders upped the ante. They urged borrowers to stop making payments on their loans altogether. Repayment rates previously above 90 percent plunged, as did the stock of SKS Finance, and banks stopped lending to microfinance institutions. The industry’s Vijay Mahajan says these developments have paralyzed business and imperiled a critical source of credit for the poor.

MAHAJAN: Instead of going after a few incidents where, you know, extreme overlending had been done, or going after one or two institutions which had systematically engaged in such practices, the entire sector was converted into a demon.

DE SAM LAZARO: Mahajan defends several practices singled out for criticism, like weekly collections. Laborers get paid weekly, he says. As for interest rates, he says microlenders themselves borrow from banks at 12 to 13 percent interest and incur high costs going door to door to collect payments. However, critics say these commercial microloan companies cared more about the profit of their investors than the welfare of their clients. Ela Bhatt, who runs the much smaller nonprofit Sewa Bank, says people at the very margins of the economy need much more than credit, because many of their most basic needs are not met. 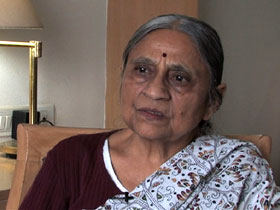 ELA BHATT (Sewa Bank): There are so many gaps, so many leaks in the life of the poor, and for them livelihood is very essential. Unless we have something really concrete to improve the livelihood conditions so that they have more income, all these have to be done. Otherwise, only microcredit is just flimsy.

DE SAM LAZARO: In other words, she says loans should be used to finance productive activities that generate new income. In Andhra Pradesh the government says two-thirds of the loans were used for everyday households needs. Bhatt and many development experts say commercialization has distorted the central mission of microlending. But Basix’s Mahajan says there’s simply not enough money in the nonprofit or charity world.

MAHAJAN: The capital investment that’s required to meet all the, you know, unmet needs of poor people in this country and the world, for all kinds of things—it runs into trillions of dollars and you need, therefore, mainstream capital to actually underpin any attempts at addressing this in a business-like way. 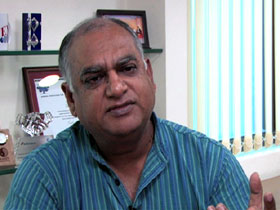 DE SAM LAZARO: Mahajan agrees microlenders will have to return to lending strictly for income-generating activities. For now, banks have slowly resumed lending to the companies, and both he and regulator Subramanyam Reddy say it’s critical that borrowers now resume paying back their loans, though Reddy says they’ll have to be rescheduled with lower payments and longer payback periods.

(speaking to Mahajan Reddy): So you would like for people in distress to have loan modification, not loan forgiveness, basically?

REDDY: Absolutely, absolutely. Clearly many of these loans are unsustainable, but yes, I mean no loan forgiveness.

DE SAM LAZARO: There’s broad consensus that microfinance can be an effective tool to bring hundreds of millions of poor people into the global economy as participants in one of the world’s fastest growing economy. But the more immediate task is to clean up the microfinance industry that’s been spawned in India, one that right now looks very much like the American subprime mess.

For Religion & Ethics Newsweekly, this is Fred de Sam Lazaro in Hyderabad, India.