MARY KARR (speaking to students): Every poem probably has sixty drafts behind it.

JUDY VALENTE, correspondent: Mary Karr talks about her love of poetry with students at a writers’ conference in Michigan.

VALENTE: Karr was known mainly as a poet until her coming-of-age memoir, “The Liars’ Club,” became a bestseller in the 1990s. It was the vivid story of a sometimes hilarious but often brutal Texas childhood. 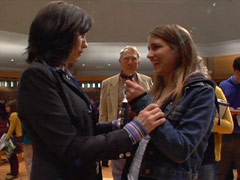 (speaking to Mary Karr): Here’s a snapshot of your past, the past that you write about: troubled family life, unstable childhood, alcoholism, divorce, depression, near suicide. Who is Mary Karr today?

KARR: Well, it’s really been uphill since all that.

VALENTE: Karr reveals the rest of her story in a new memoir, a story summed up in its title “Lit”—as in lit from within by the literature she grew up with, by alcohol and drugs, and finally lit by a faith she found unexpectedly in the Catholic Church.

KARR (speaking to writers’ conference): No one in the Catholic Church hired me as a spokesperson, nor would they. I’m sure I’m not the pope’s favorite Catholic, nor is he mine.

VALENTE: Karr grew up amid the hardscrabble oil fields of East Texas. Her father drank himself to death. Her mother was married seven times. 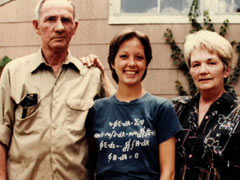 KARR: I’m somebody who really does feel like I was snatched out of the fire and found something in myself that’s luminous and gives me ballast.

VALENTE: The road to faith was a long, hard climb for someone who once described herself as an “undiluted agnostic.” By her mid-thirties Karr’s life had begun to unravel. Her marriage was failing. She drank heavily, wrecked the family car, was hospitalized for an emotional breakdown. In desperation, she took a friend’s advice and reluctantly began to pray.

KARR: I would kind of bounce on my knees, and I would say, “Higher power, please keep me sober today”—whatever they told me to say—and then at night I would say, “Thank you for keeping me sober today,” and then I started to express myself, which was often, you know, with obscene gestures, double-barrel at the light fixtures.

KARR: Karr was newly separated and trying to stay sober when her five-year-old son asked her to take him to church.

KARR: And I said why, and he said the only sentence he could have said that would have gotten me to church. He said, “To see if God’s there,” and I thought, “Oh. Okay.” 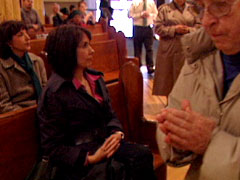 VALENTE: Karr took her son to various churches, a process she dubbed the “God-o-rama.” She would sit with a paperback and a cup of coffee while he searched for God.

KARR: We got out, and we got in the car, and he’s buckling his seatbelt, and I said, “So was God there?” And he’s like, “Well, yeah,” like where were you? So that was when I decided that, for him, we would find a place of worship.

VALENTE: Karr says she still equated most organized religions with something people just did socially. Then one day she passed a Catholic church in Syracuse, New York, where she was teaching. She was struck by a banner out front. It said, “Sinners Welcome.”

KARR: I thought I had a better shot at becoming a pole dancer at 40, right, than of making it in the Catholic Church, and I think what struck me really wasn’t the grandeur of the Mass. It was the simple faith of the people. For me this whole journey was a journey into awe. I would just get these moments of quiet where there wasn’t anything. My head would just shut up, and I knew that was a good thing. And also the carnality of the church: there was a body on the cross.

VALENTE: Father. Bruno Shah, a Dominican friar, is a close friend who has written about Karr’s work. 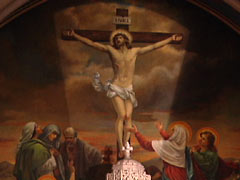 FR. BRUNO SHAH: In the Catholic Church above the altar one sees the cross with the body on it. The body is there. The corpus of Christ is there bleeding, still in the midst of the world, and that’s I think really what got to her—her experience of being a sinner, her experience of being a sinner and recognizing that this does not distinguish her from anybody else in the world.

VALENTE: Many of her recent poems reimagine the life of Christ. She sees in poetry a form of prayer.

KARR: Poetry is for me Eucharistic. You take someone else’s suffering into your body, their passion comes into your body, and in doing that you commune, you take communion, you make a community with others.

VALENTE: Karr has been sober for twenty years, but she still prays to keep her demons at bay. 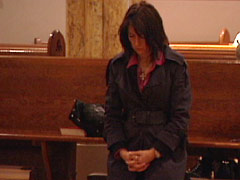 FR. SHAH: The fact that this person would turn around so drastically is compelling. She sees all the alcoholics who don’t make it. She sees all the good chances that have been given to her for no good reason, and she asks in wondering thanksgiving to God, why me? And that’s a great testimony to her faith and to the authenticity of her conversion.

VALENTE: A conversion she says transformed every aspect of her life.

KARR (speaking to writers’ conference): My goal in writing about my faith wasn’t to proselytize, even though I did feel called in prayer to write about it, but to try to make a bridge between people who had been, like myself, completely unbaptized, completely without faith, a bridge between that and to bring them into the experience of faith.

VALENTE: Karr says she hopes her turbulent past provides more than just a good story but also sends out a message of hope to others. With her characteristic wry humor, she still refers to herself as a “black-belt sinner,” but a lucky one nonetheless.

KARR: I’ve never contended that I had a really horrible life. I feel like Jesus does like me better than he does all of you.