LUCKY SEVERSON, correspondent: Do you think that the history that we have a lot of in this country was written by liberals?

SEVERSON: Don McLeroy has been practicing dentistry for over 30 years, and until recently he was chairman of the Texas school board—the board that stirred up a hornet’s nest with its efforts to amend Texas history books for the state’s nearly 5 million students.

MCLEROY: Some people characterize, oh, we’re making our standards lean to the right, oh my gosh, you know. The left has dominated a lot of history.

SEVERSON: Barbara Cargill has been on the board 6 years. She teaches science to children and agrees with McLeroy on most issues.

BARBARA CARGILL: We want to take all of the content that liberal publishers might have and want to pour into the classroom, and we serve as the filter for the parents and students and the teachers to kind of make sure that what gets through is really the best information.

SEVERSON: There are 15 state school board members here in Texas—ten Republican, five Democrat. They’re elected to four-year terms, and every ten years they’re required to reevaluate and make any changes they deem necessary to Texas textbooks. But never before have there been so many changes, almost all of them from Republican members—changes that ignore many of the recommendations Texas history teachers were mandated to make and spent a year compiling.

This is Mary Helen Berlanga, a lawyer and a Democrat who has been on the school board longer than any other member.

(speaking to Mary Helen Berlanga): Have you ever had anything like this in your 27 years? 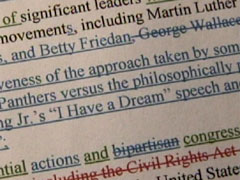 MARY HELEN BERLANGA: No, never, and I think if you look over the 300 amendments you’re going to see that it is pretty much a rewrite of the original book that was given to us.

SEVERSON: It’s difficult for outsiders and even board members to make sense of all the amendments that have been offered, but most agree they paint conservatives and conservative values in a more favorable light. They extol the virtues of free enterprise and American foreign policy and emphasize that this country was built on Christian principles.

CARGILL: I am the mother of two Eagle Scouts myself, so it was very important to me that a lot of the values would be upheld in the social studies curriculum, and so throughout the elementary standards you will see that our teachers are now required to teach their students about truthfulness, respect for oneself and for others, holding elected officials to their word, the duty that it is to vote, and you will see this language used over and over again starting in kindergarten and going through the 4th grade.

SEVERSON: Mary Helen Berlanga, like the other Democrats on the board, is a minority, and she argues that the contributions and treatment of minorities in Texas are “whitewashed” in the proposed standard changes.

BERLANGA: When it comes to the section on civil rights, they do not have anything that is specific to the Mexican-American experience.

BERLANGA: In Texas. The Mexican Americans were discriminated against. They weren’t allowed in theaters to buy popcorn and their drink to watch the movie until everyone else was seated, in some parts of the state. Mexican Americans were not allowed to go into a restaurant and eat because on the outside it would say “No Mexicans allowed, no dogs, no Negroes.”

SEVERSON: Fritz Fischer is a history professor at the University of Northern Colorado and chairman of the National Council for History Education. He believes board members should not be the ones to change history.

SEVERSON: When Professor Fischer refers to the government, he’s speaking of the elected school board members. He says most boards around the country make only a few changes to those submitted by the experts. McLeroy himself added about 60 amendments.

MCLEROY: Conservatives on our board are the only ones—the Christian conservatives—that are able to sit there and to think for themselves and say, well, wait. Is this really good policy? Should we just trust what’s being brought to us? Should we just rubber-stamp it?

SEVERSON: Some amendments were simply to change words or terminology. What was “democratic societies” becomes “constitutional republics.” “Capitalism” is no longer in favor. The preferred term is “free enterprise.”

BERLANGA: One of the right-wing fanatics said that capitalism had a bad connotation—that people referred to us as a “capitalist pig.”

SEVERSON: Lawrence Allen, a Democrat board member and an educator with two masters degrees, opposes changing the word “capitalism.”

LAWRENCE ALLEN JR: I think there are a number of citizens today who say, well, I don’t have a job, I don’t have any money, so I don’t know how wonderful the free enterprise system has been. I think that capitalism and these systems have made some of our citizens very fat and a large number of them very thin, and so I don’t favor that at all. 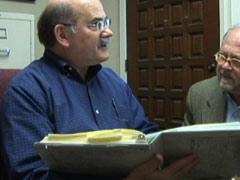 SEVERSON: The board’s majority added an amendment that seems to justify the dark years of the McCarthy era. They believe documents known as the Venona Papers confirm suspicions of communist infiltration of the US government.

FISHER: The way the standard is written, as far as I’ve seen it so far, says that they must include information that exonerates McCarthy. In point of fact the documents they’re referring to do no such thing.

CARGILL: One of the chapters in this US history book was called “Nightmare at Omaha,” and some of the board members were very concerned about what was covered on this page—Americans landing at Omaha Beach. 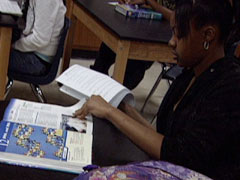 SEVERSON: So board members met with the book publisher and got the title changed from ‘Nightmare at Omaha” to “A Day for Heroes.”

CARGILL: The details of the battle are still here. However, because of the sacrifices made that day by our American soldiers we want our students to learn that these men were truly heroes, and so it changes the tone that the teacher uses in the classroom, or if a student is reading a textbook it changes their whole mindset, and this is what we want.

FISCHER: Theoretically something like this could happen from the left some day as well as from the right. It’s to focus on what is good history teaching, and what is the purpose of history in the classroom? It’s to teach judgment and critical thinking. It’s not to teach a particular political version of the past.

MCLEROY: They need to have an accurate view of history. Accuracy, balance, free of bias, and I’ll vote for that every day of the week.

SEVERSON: He won’t be voting much longer, at least not on the board. McLeroy was defeated in the recent election, but he’ll continue to serve through the remainder of the year. The amendment process is not over yet. The Texas School Board meets one more time.

SEVERSON: Allen believes there may be far-reaching consequences to the board’s final vote.

ALLEN: There are other elected officials that are watching this who are saying that maybe the state board has run its course because of some of what they call hijacking the public curriculum, and so there are state representatives and other legislators out there ready to do away with the power of the state board in this type of activity.

SEVERSON: Texas purchases so many textbooks it drives the price down so much other states often buy exactly the same book. That’s why educators around the country are watching what happens here very closely.