BOB ABERNETHY, host: Beneath the Jerusalem hills, near the entrance to the city, are the remains of the former Arab village of Lifta. All of Lifta’s Arab residents fled or were forced out during Israel’s war for independence in 1948. Today, it’s the only once-Arab village in Israel that has not been destroyed or resettled by Jews. Lifta’s former Arab residents want it back. The Jerusalem government wants it developed for luxury housing, and some preservationists, on both sides, want it kept as a monument to what life there used to be. Menachem Daum is an American Jew from Brooklyn. He traveled to Lifta recently to hear all sides of the story.

MENACHEM DAUM: I may have a family link to Lifta. My uncle, Meyer Yosef, a member of the Betar Zionist youth, left Poland for Palestine in 1937. He joined the Lehi militia, also known as the Stern Gang. He was my hero. While the rest of my family were victims during the Holocaust, he was a fighter for the Jewish people.

NECHAMA NUSBAUM (Meyer Yosef’s Wife): He was convinced that Israel was home. That’s what he told his mother when she was crying at the train station when he left Poland. She was crying so much. He said, “Don’t cry, I’m going home.” The Arabs—we didn’t think about them at all.

DAUM: In 1947, my uncle’s Stern Gang and other Jewish militias were fighting Arab forces near Lifta. On December 28, Jewish fighters entered Lifta’s coffeehouse and killed at least five villagers, allegedly in retaliation for an attack on a passing Jewish bus. Fearing for their lives, most of Lifta’s Arab residents fled. None have ever been permitted to return. On a visit to Lifta’s spring I met a group of Israeli youngsters and was curious to hear what they knew about Lifta. 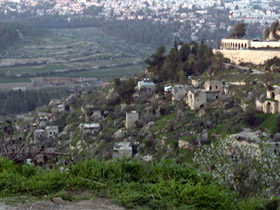 DAUM (speaking to Israeli children): So what about the history of this place?

FIRST GIRL: When we came to capture the land, so they didn’t like Israel so they escaped. They just want to kill us.

DAUM: What would you think if some people who used to live here 60 years ago wanted to come back?

FIRST GIRL: That it’s theirs.

THIRD GIRL: God promised to give the land to us.

DAUM: For most of my life I held the same simplistic attitudes as these girls and until today have never heard spoken to Palestinians to hear their side of the story.

DAUM (speaking to Yacoub Odeh): Did you have phones here, by the way?

ODEH: No, we are shouting. I want to call my young cousin or uncle, “Mahmoud!” I shout, and he answered me in the same way: “Yacoub!” 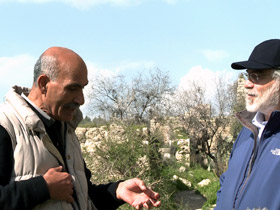 DAUM (speaking to Yacoub Odeh): I always looked upon my uncle as a hero. All my other relatives died in the ovens, and he was a fighter.

ODEH: Now my question for you: How do you look on a person kicked you from your house, destroy your life to become a refugee, to be in a tent and in winter cold or in summer hot? I think who steal, who theft your freedom, your dignity, your right to live with your community, and kick you out in a miserable life—no time you will see him a hero. If I do it, sure you will hate me. You will attack me. You will attack me.

DAUM: Yacoub’s description of his village reminded me of the memories that were passed down to me of my ancestors’ destroyed shtetls in Poland. If the development of Lifta goes through, will its Arab heritage and memories also be erased? I went to Ramallah in the West Bank to meet other former residents of Lifta and collect their memories.

MRS. HAMUDDEH (Former Lifta Resident): We had Jewish neighbors and Christian neighbors. We all lived together happily. Our Jewish friends would come to our weddings and parties. The Christians also came. We were like one family. 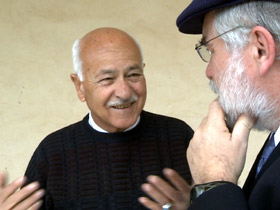 JALAL AKEL (Former Lifta Resident): I took all my children to Lifta. I showed them where our house used to be. I showed them everything. Of course, we always tell them there is hope. Even if only for the children of our children, the hope is still there.

You can see those cars? They are exactly up the wadi of the valley of Lifta.

DAUM: So you look here from your roof and you see.

DAUM: Neither Lifta’s former residents nor their children are likely to return if the government allows Lifta to be developed. Under its plan, the 54 existing ruins will be rehabilitated and sold as villas and will be surrounded by luxury housing, hotels and shops. Proponents of the plan say it will actually preserve Lifta and save it from further deterioration.

ITZIK SHWEKY (Society for Preservation of Israel Heritage Sites): We are not interested in erasing heritage. The plan addresses the heritage of Lifta, to leave the old architecture. We are not building new buildings that will be tall, but will be in the style of old Lifta.

DAUM: Wouldn’t it make symbolic sense to somehow not develop Lifta right now and hold it as a symbolic gesture for some better future? 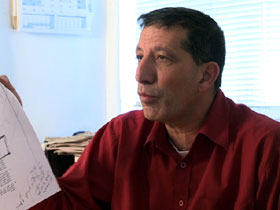 SHWEKY: I think that you are wrong. I have a different opinion. If I turn it into a monument and say on this site there was an Arab village, that will only lead to hatred and painful memories, because we would then be causing conflict, and then they’re going to say that this is how we once lived and then the Jews came and threw us out. No, I’m not going to do that. We are the State of Israel. We are Jews. We don’t have to save the Palestinian heritage. They will know that it was Lifta, but we are a new nation that has to progress.

DAUM: While some Israelis see the ruins of Lifta as a threat to peace, others believe just the opposite. They want to preserve Lifta as a place of education and hopefully reconciliation.

DAFNA GOLAN (Sociologist, Hebrew University and Lifta Preservation Activist): Lifta is also a village of hope. It can be a place where we can talk about our future, where we can remember the past, where Israelis could see how Palestinians used to live, could understand what it means for Palestinians to lose their houses, what happened to them in 1948. So why destroy this little hope that we still have?

DAUM: My uncle dreamed of a land where Jews could walk the streets proudly as Jews. He saw Arabs as an impediment to that dream. I have come to believe that Lifta is important for Jews as well as for Arabs. If Jewish and Arab youth grow up believing they have always been natural enemies, peace will be impossible. We need to preserve Lifta to challenge the simplistic memories we often pass on to the next generation.

ABERNETHY: Menachem Daum says he has made many trips to Israel, but this was the first time he ever talked with Palestinian Arabs. They all had grievances, he said, but no one expressed hatred of him because he is a Jew. They want to live in peace, they told Menachem. Muslim, Jew, and Christian together the way they used to.