(Female voice): The Lord is my shepherd, I shall not want…

(Female voice): For I know that my redeemer liveth and that he shall stand at the latter day upon the earth.

KIM LAWTON, correspondent: The familiar rhythms and cadences have echoed over four centuries, and believers and nonbelievers alike say it’s impossible to overstate the impact of the King James Version of the Bible.

LAWTON: Jon Sweeney is author of a new book, Verily,Verily, which examines that influence. He says the King James Version—the KJV—has been particularly important in American culture and history. 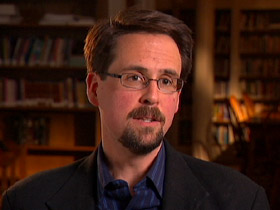 LAWTON: Sweeney’s book is one of many being released for the KJV’s 400th anniversary. All year long, groups around the world are organizing celebrations, from symposia and exhibitions to special projects online. Based in Nashville, Tennessee, Thomas Nelson Publishers is the leading commercial publisher of King James Bibles, and they’re still rolling off the presses. In this factory, workers add thumb indexes to help readers more easily find the various books of the Bible. For the 400th anniversary, Thomas Nelson has released a special limited edition King James Bible.

Today, more copies of contemporary translations may be sold, such as the New International Version or NIV. But the King James Version is still near the top of the list. In just the last 12 months, Thomas Nelson sold more than a million copies of the KJV.

RON WICK (Bible Collector): The King James is the most printed book in the history of man. It is an amazing thing. 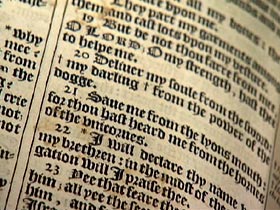 LAWTON: The King James Bible emerged out of a tumultuous religious period in English history. For nearly a millennium, the Latin Vulgate Bible had been considered the only sacred text. As Latin became less used, ordinary people couldn’t understand what they heard when priests read the Bible in church. There were calls for an English vernacular Bible, but scholars who did the translations were branded heretics. In 1401, the English parliament made it a crime punishable by death. Enter William Tyndale, a renegade sixteenth-century scholar who made the first English translation from Hebrew and Greek texts. In 1536, even as King Henry VIII was separating from the Roman Catholic Church, he had Tyndale arrested and executed. But just a year later, it was Henry who authorized the first legal English translation.

LAWTON: Baylor University professor Scott Carroll directs the Green Collection, one of the world’s largest private collections of rare biblical texts and artifacts. He says 80 percent of Tyndale’s work ended up in the KJV.

PROFESSOR SCOTT CARROLL: I think he’s an unsung hero in the whole story.

LAWTON: After Henry VIII came a series of English Bibles, all intertwined in the often bloody battles between Catholics and Protestants. When King James I came to the throne, he wanted a version of the Bible that wasn’t tied to a particular movement. He formed a translation committee of scholars. 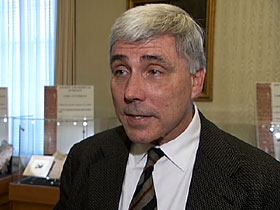 CARROLL: They were commissioned in 1604 to find the best translations out there and then match them up with the Greek and Hebrew, and if they matched up to take them. When you think about the King James, I think generally people think about—they think it’s a Protestant commodity. But in fact it really was a result, a culmination of Jewish, Catholic, even Greek Orthodox scholarship that led to this publication.

LAWTON: What has been called the “masterpiece by committee” was first published in 1611, and thanks to moveable-type printing, the King James Bible was widely distributed.

CARROLL: 1631—the Wicked Bible, where a typesetter forgot to put the word “not” in and it says “thou shalt commit adultery,” and the poor printer was fined. He had to pull all the books off the market, so he lost his investment in that and he ended up dying in debtor’s prison.

LAWTON: The King James Bible caught on, and for the next three centuries it was virtually the only Bible used in the English-speaking world. Its literary beauty inspired writers and artists, who incorporated the language into their work, from the most beloved classics to the world of pop culture. 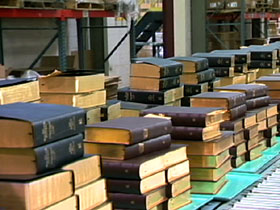 SWEENEY: The King James Bible is meant to be read a loud more than any other translation, and I believe that the translators themselves knew that. There were poets in those rooms in the Jerusalem Chamber in Westminster Abbey, and they wanted the Bible to sing. For instance, I Kings 19:12: “And after the earthquake a fire; but the Lord was not in the fire: and after the fire a still small voice….”

LAWTON: The KJV has had a significant impact on spoken English as well.

LAMAR VEST (American Bible Society): Many of those phrases that we hear today everyday, over 350 that have been identified that are used in modern English, came right out of the King James, and most people don’t have a clue that they’re quoting the King James Bible.

SWEENEY: The powers that be; a man after his own heart; signs of the times; eat, drink and be merry; the apple of his eye; can a leopard change his spots; am I my brother’s keeper; seek and ye shall find; the Lord is my shepherd; let my people go; and on and on and on.

LAWTON: The KJV’s poetic rhythms made it easy for people to remember.

Unidentified Man: “For I know the plans I have for you, saith the Lord.”

Unidentified Woman: “Thy word have I hid in my heart that I might not sin against God.” 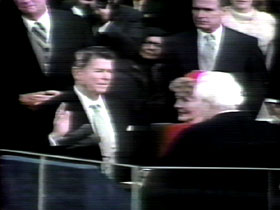 LAWTON: Almost every American president has been sworn in with his hand on a King James Bible. KJV language has been the source of some of the most important speeches in America’s history, including Lincoln’s Gettysburg Address and Martin Luther King Jr.’s most beloved remarks.

President Barack Obama: … that I am my brothers’ keeper, I am my sister’s keeper.

LAWTON: For a long time, many Christians considered the KJV the only version authorized by God himself. With the advent of more modern translations, the number of King James-only churches has decreased dramatically. But the KJV has never disappeared from regular use.

BOB SANFORD (Thomas Nelson Publishers): There used to be—maybe 30, 40, 50 years ago a single translation might be the preferred translation of choice for a church. I think those days are gone. Where a pastor, if he’s smart, will use multiple translations, the King James will likely be one of them.

LAWTON: Even congregations which may think they don’t use the King James might be surprised to learn the language of the Lord’s Prayer recited in most churches is indeed KJV.

People praying: Our Father, who art in heaven, hallowed be thy name. Thy kingdom come, thy will be done, on earth as it is in heaven…. 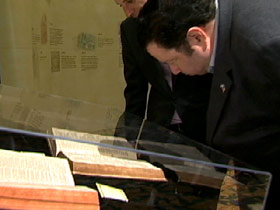 LAWTON: Recognition of the KJV’s influence crosses theological lines. The Vatican Embassy in Washington hosted a reception in honor of the 400th anniversary. Guests got a first look at a traveling exhibition that will be on display in Rome later this year, and at the Christian Science headquarters in Boston, the Mary Baker Eddy Library also has a special KJV display. There, visitors can hand-copy verses from the King James Bible in the same way monks and scholars copied Scripture before the invention of the printing press.

LAWTON: Still, many modern Christians say they find the KJV frustrating for personal use. The sometimes arcane words can be difficult to understand, and many trip over all the thees and thous. Jon Sweeney believes this is unfortunate.

SWEENEY: Contemporary translations are good. They’re great. They make the Bible relevant, but at the same time I think it makes it kind of ordinary, so reading the Bible is kind of like reading a popular novel.

LAWTON: Sweeney says the KJV can bring a sense of wonder and majesty that is spiritually meaningful if people take the time to experience it.

LAWTON: And 400 years later, millions around the world still agree.