DR. JAMES OLESKE (University of Medicine and Dentistry of New Jersey): I don’t have a big lap like Santa. Do you like that rabbit? That’s yours. It’s a purple rabbit. That’s purple. Alright, I was told that three times he was in the ICU?

In the US we’ve been mostly concentrating on curing every child. We’re not going to let a child die. Now that’s a great challenge to motivate by, but the ones we can’t cure we just wash our hands and move on, and they’re left to their, by themselves.

Balloons! I guess this is part of our play therapy.

I went into pediatrics because I loved children, and I thought I would help children, and I wasn’t prepared to go to funerals, so many at least, in the beginning of my career. My teeth were cut on all the AIDS kids I took care of, and kids would come in, you know, with all their baby teeth were blackened down to the gum line. They’d have abscesses, and their thrush was so bad it would make it impossible for them to swallow or eat. So then you have an infant….In the beginning of the epidemic, when people were initially afraid, people who had AIDS and who were dying—they were left alone. Everyone shuns you, even your doctor. In that era I would reach my hand through the bars, because kids are always in these cages, and just hold their hand or leg and just, I guess, in my own way pray and hope and wish and lay hands on. 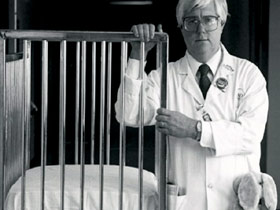 One of the reasons I’ve gotten into the Circle of Life and palliative and pain management is that I saw what a bad job I did in AIDS—very painful disease, and I wasn’t aggressive in the beginning. I am now, but I learned. One of the patients I learned from was Quinetta. She had a tumor throughout her GI tract, and the only way she could relieve her pain, because I wasn’t giving her enough morphine, was to sit in bed scooched over and rocking, and somehow that helped her pain, I guess. When she died, I went in to talk to her grandmother, who I was very close with. I went into the room to tell her, and the next thing I know I’m in her arms crying, and she’s comforting me.

I just wanted to point out to the medical students that pain management and what I like to call palliative care in chronic diseases is not just taking care of children who are dying and end of life care like hospice. This is a much more long-term approach to how we improve the lives of children, and pain management has not been a great success by pediatricians in the past. I mean, we’ve been afraid to use drugs that really control pain and have undertreated pain for such a long period of time.

Less than 1 percent of patients with chronic illnesses ever get addicted and use drugs for drugs’ sake use. Ninety-nine percent of them never happen. So what we do is we don’t treat the 99 percent because we’re worried about this 1 percent, and it’s crazy. So for children it’s even more of an argument you have to make because people, “you’re going to make them addicts.” We’re not going to make them addicts. 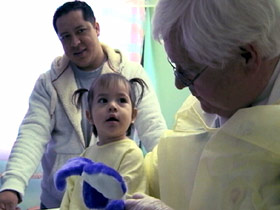 Medical Student: She’s a 12-month-old female who has a history of MRSA positive abscess, who was readmitted on Sunday and started on a five-day course of antibiotics. She’s been doing well. She’s been afebrile the entire time.

Dr. Oleske: And we can take that nasty old IV out.

Medical Student: Yes, since she’s done with her antibiotics it can come out.

Dr. Oleske: Great. I’m going to give you this rabbit so you have two of them.

What the Circle of Life is all about is any child with a chronic illness that’s causing pain to be as aggressive with the pain management as you are with treating whatever the disease the child has so that when they do live longer it’s quality of life, and when the children are ready to go on Circle of Life is also committed to helping families deal with that dying process.

And we’re struggling. We have two non-paid physicians, we have two paid nurses, a half-time bereavement counselor, and yet we’ve been able to service so many families in New Jersey and make a difference.

Mr. Schorbel: Dr. Oleske, how are you? It’s good to see you. We’re glad you’re here.

Dr. Oleske: You know she is my favorite patient. 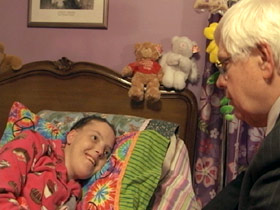 Dr. Oleske: I’m not supposed to say that.

I already had a group of patients that I think needed and would benefit from palliative care. One of them was my favorite patient of all times, Leann Schorbel.

Dr. Oleske: Is that light too much?

Leann was a special person. She sort of arrested, if you will, her mental and physical growth because of an endocrine problem she had, added to the GI problem she had…

…added to the immunology problem she had, added to the anatomical, ventricular, brain and blood supply system that she had. I almost wonder how she survived.

Dr. Oleske: If you were closer I’d come and draw your blood like I used to.

And I sort of grew up with Leann over the 25 years I’ve known her, trying to treat her immune deficiency.

Dr. Oleske: Well, you know that the specialist at the hospital should be able to draw blood. I’m not the only person that can do that. 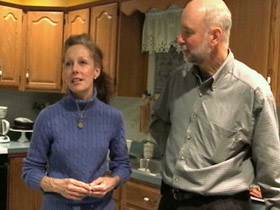 Leann Schorbel: Yes, you are!

Mrs. Schorbel: Circle of Life will keep her at home. That’s what we need, and that’s the people that we want to be here. It keeps her surrounded by the things that she loves and still not feeling well it keeps us as a family together. We’re not separated because when you’re in the hospital you’re totally separated.

Mrs. Schorbel to Leann: There was one person that you like that was on it, and who was that?

Mrs. Schorbel: She knows that mommy and daddy are with her and that the people that will come in to help her are loving people that are very gentle and kind and they are going to respect what makes her feel good and they are not going to scare her.

If you look at the history of Islam and the Prophet Muhammad, he made statements like doing good, kind act to others is important, but relieving the suffering of others the reward is God. And if you look at the Christian ethics, you have Christ saying, “Suffer the little children unto me.” It reminded me of the AIDS kids, you know. Christ, if he was here, he would have embraced the AIDS kids. He wouldn’t have said, ugh, I don’t want to get this disease. He wouldn’t have put on a gown and mask and gloves. He would have embraced them.

Dr. Oleske to nurse: So you want to tell me a little bit about the baby… 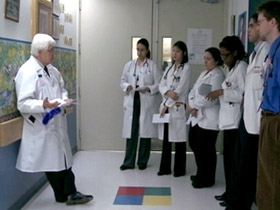 Our role as physicians, as healers, is to relieve pain and suffering and to also meet the spiritual needs of the families and children. That doesn’t mean that you take on the role of their religious advisors but that, first of all, you respect what their religious and spiritual beliefs are, and I think it’s important for physicians to have some type of spiritual bedrock if they’re going to do this.

Nurse: We can dim the lights according to the time of the day.

When I was first in AIDS people would interview me and say you’re a pioneer, and I never knew what that meant. Did I carry a fork and I had overalls on? But maybe, in a way, Circle of Life is a little pioneering, but I’m hoping that instead of just being a pioneer we end up being the standard of care…

Dr. Oleske to patient: You have my bunny! I have the same one. We match!

Dr. Oleske: This is a very beautiful young girl, mommy…

…every child in the United States, and internationally.