LUCKY SEVERSON, correspondent: It’s about midnight, the first of November, known in the world of Voodoo as the Day of the Dead—a time to visit a cemetery and the spirits of those who have moved on. This is New Orleans, and the Voodoo priestess leading the celebration is Sallie Ann Glassman.

SALLIE ANN GLASSMAN: We all have loved ones who have passed, and what a comfort to be able to visit with them and to know that they are there with you and to be able to tell them that you love them and know that your message is received and just be in their presence again. It’s a tremendous comfort.

SEVERSON: It’s been a long evening, starting with the ritual dancing, the beat of the drums—Sallie Ann in her element. There are other Voodoo priestesses in New Orleans, but she is one of the most popular, one of the most unlikely—a Jewish girl from Maine who says she knew as a child that there was something different about her. 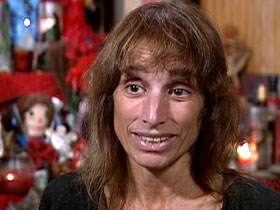 GLASSMAN: I started to put things together and realized that particularly adults were a little taken aback by me, and they really seemed a little afraid of me, and then I started realizing I knew more about them than they were telling me.

SEVERSON: Those outside the Voodoo realm seem to have always been afraid of it. She thinks she knows why.

GLASSMAN: I think when you ask questions about why is Voodoo so vilified the clearest answer I can give you is that Voodoo recognizes an invisible world of great power and of spiritual power and that the surface reality is really just the surface of things. There is a vaster, more beautiful world going on inside, throughout, above, beyond, within all of that.

SEVERSON: A majority of the Voodoo practitioners are women, and many are Catholic, according to Martha Ward, a professor of anthropology at the University of New Orleans. She wrote a book on the queen priestess of them all in New Orleans, who was actually two women with the same name, a mother and daughter, each known as Marie Laveau.

PROFESSOR MARTHA WARD: They were good Catholics. They were married and buried within Catholic traditions. 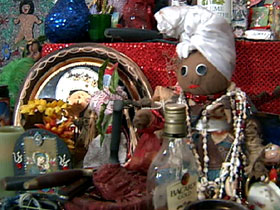 SEVERSON: And there are other similarities, she says.

SEVERSON: In Voodoo they’re called spirits, the spirits of ancestors.

GLASSMAN: There are all these myriad spirits that are really intermediaries, and first I should say that there is a supreme deity in Voodoo. There is a God called Bon Dieu. But in between God and humanity are these thousands of spirits. Maybe one time you’re possessed by Ogoun, the warrior spirit, and another time you’re possessed by Erzulie Freda, and you see the world through rose-colored glasses.

KAREN JEFFRIES: When I look at Voodoo, I see this is a group of spirits that are there to help us in everyday life.

SEVERSON: Karen Jefferies moved to New Orleans after divorcing her husband, a Lutheran minister. She says she grew up in a fundamentalist Christian home.

JEFFRIES: Christ is still my foundation of spirituality, but then I find that Voodoo acknowledges another spiritual realm.

SEVERSON: She now owns a bed and breakfast in the French Quarter. 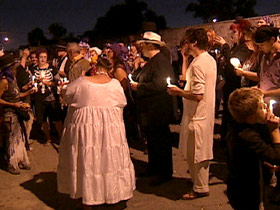 JEFFRIES: Shortly after I purchased this house I heard about a Voodoo ceremony for the protection against hurricanes, so I went and out of curiosity it was really fascinating to me. So I ended up going back to all the bigger public ceremonies that Sallie Ann Glassman would hold.

SEVERSON: As the celebration of the Day of the Dead danced on, there seemed to be a discernable change in Sallie Ann’s countenance.

GLASSMAN: There are different levels of possession that a person can experience, and when I go into that kind of a state I have no idea what’s happened. I just know that when I come out of it people are looking at me funny, and then I’m in a different place than I was before.

SEVERSON: Sallie Ann says she has been accused of casting spells on people, something she says she wouldn’t do even if she could. She says using black magic can be risky business. Professor Ward says cursing someone in Voodoo, such as sticking pins in dolls, is not something to fool around with.

WARD: All religions are used that way, period, full stop. I’ve done it and you’ve done it. Have you ever cursed somebody? We’re all capable of bringing mild to big curses on others. In Voodoo, what goes around comes around, and if I curse you, I’ll get fixed.

SEVERSON: She describes Voodoo as a religion that can be shared with other religions. In New Orleans, back in the early 1800s, Voodoo was the widely accepted religion among slaves, until the slave uprising that threatened white slave owners. 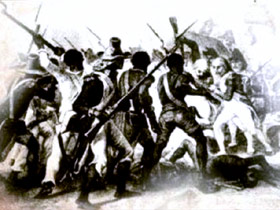 GLASSMAN: If you were a slave living in captivity and hard labor, and your prospects were certainly very limited, this belief in an invisible world of great spiritual power would certainly be empowering, and if you were a slave owner intent on keeping a people down, oppressing them, and this belief would be terrifying and disturbing, and instead of saying that the situation or the institution of slavery was this terrible evil, it was much easier to say these people are evil and we’re just keeping them contained.

WARD: They said “slave rebellions” like the same way we say “crime.” They were terrified. Voodoo went from being an ordinary, accepted thing to a demonized, stigmatized, racialized, sexualized white ideology.

SEVERSON: Sallie Ann says she knows what it’s like to be called evil.

SEVERSON: But she’s not just anybody else when she walks through the neighborhood. Everyone seems to know her and like her.

GLASSMAN: Being a priestess is a demanding job, and I say job lightly because it doesn’t pay. People come to me and need things. They need help. I’ll try to be a mediary between these individuals and help them to those crossroads where human prayer meets spiritual presence and do all kinds of healings. 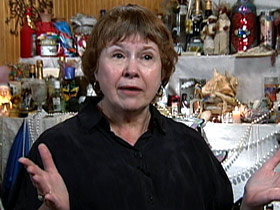 WARD: Sally has worked tirelessly here in the community. She makes the streets safer because that’s something the spirits can help us do if we ask them—make our streets and neighborhoods safe for us. Help people put on roofs after Katrina.

SEVERSON: The priestess says the spirits have always protected New Orleans from hurricanes, and Katrina would have been worse if the spirits hadn’t intervened.

GLASSMAN: As it happened, Katrina did not hit us over the head. It did turn to the east, and it did downgrade from a Category 5 to I think it was a Category 3 or lower when it hit, and it wasn’t the hurricane that kicked our butts. You have to spend a little time taking care of your environment or you’re going to get hurt.

SEVERSON: After Katrina she spearheaded the drive to build this multimillion-dollar health and healing community center to help those struggling to rebuild their lives, both physically and spiritually. Still, she says, there are people who say it’s not a good idea to have a Voodoo priestess involved in such a public project.

GLASSMAN: But I always say to myself, you know, Voodoo’s early ancestors endured slavery and captivity, and they kept their beliefs alive. Who am I to be upset over having to defend a practice? Who am I to say I can’t handle this?

SEVERSON: It seems improbable that Voodoo will ever be widely regarded as anything but scary and dark and, in Sally Ann’s view, misunderstood.