BOB ABERNETHY, host: All week, financial experts in and out of Washington warned of the catastrophic consequences if Congress does not raise the country’s debt ceiling by August 2. After that deadline, the government would not be able to pay all its obligations for the first time in history. Officials warned that that could trigger financial chaos and vast hardship. By week’s end, there were signs of a temporary fix to the debt ceiling problem, but no agreement on a long-term deal on spending and taxes, which many had wanted, including the president. 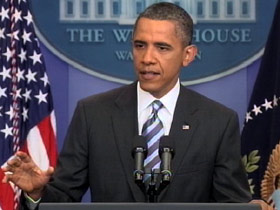 ABERNETHY: In the midst of the financial debate, where are the churches? Can religious leaders influence the politicians? Author and activist Reverend Jim Wallis is the editor of Sojourners magazine. His is a leading religious voice in political debate. Jim, welcome.

ABERNETHY: There are two big questions that people have been arguing about in this town. One is the debt ceiling. The other is long-term. The debt ceiling is something has to be done now, but long term, how do we bring the country’s spending and taxes in line? You’ve been working very hard lobbying to protect government programs that help the poor. How are you doing?

WALLIS: Well, I think I’m happy with what we’ve seen so far. We started with a provocative question: What would Jesus cut? That got attention to the question. Then we fasted for almost a month in Lent. That brought more attention to it. Then we formed a “circle of protection”: Roman Catholic bishops, Salvation Army, National Association of Evangelicals, many people, not the religious left here, almost everyone saying that you can’t balance the budget on the backs of the poorest people. And I think that voice is now being heard. We’ve talked to Republicans, Democrats, and the White House right along on this.

ABERNETHY: You are trying, I think, to get a meeting with a lot of the players in this?

WALLIS: We have been meeting right along.

ABERNETHY: Well, what do you say to them? 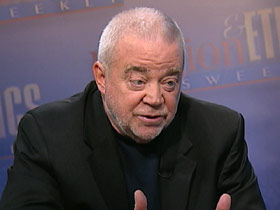 WALLIS: We say, you know, there are principles here, that a budget is a moral document and must be evaluated by those from the bottom up. That’s our point of view. And the common good has to outweigh ideological political battles in this town. But we also ask them what their faith means. If they are people of faith, and many say they are, what their faith means, their moral compass, how they decide things.

ABERNETHY: You take that argument, what does your faith mean, to Republicans in the House who insist on no compromise?

WALLIS: We sure do. The Catholics, evangelicals, Republican side, Democratic side. Now we don’t get involved, Bob, in which bill we are going to support. We don’t lobby for bills. But we say there are principles here. You can’t just have the benefits all go to corporations and wealthy people and nothing for those who are most vulnerable.

WALLIS: Well, this week we’ve organized 5,000 pastors to say let’s look at the real people in our congregations and our communities, what’s going to happen to them, as opposed to the Washington, D.C. question, who’s up, who’s down, who’s going to be the Speaker of the House next time, who’ll win the next election. The common good is about the real people, the people we have to always take into account. And pastors, I think, I wanted to talk to people whose job it is to have re-read the Bible to get to the focus on who the real people are here.

ABERNETHY: But this argument about how to cut spending, what could be cut, how to raise income, this is a very technical, very political argument. How do people, how do religious leaders feel? Do you feel that you have the ability to get in and be influential in something as technical as this debate?

WALLIS: You know, the details are technical and not difficult, really. Once you agree to some principles, the details can be worked out by the politicians. We say “let justice roll down like waters.” Let the politicians work out the plumbing here. You know, we don’t get into all the details. We’re saying there are principles here. If this is going to focus on targeting poor people, we say that’s wrong. It’s got to be shared sacrifice here. How you do it, this really isn’t rocket science. We could solve this if the principles were clear from the start.

ABERNETHY: Many thanks to Jim Wallis of Sojourners magazine.