DEBORAH POTTER, correspondent: It’s often called the Emerald Isle—and with good reason. Ireland is as green as ever. But the country that once was a bastion of Roman Catholicism has changed. The vast majority of people here still call themselves Catholic—87 percent on the most recent census. But many of the most faithful church-goers in Ireland today aren’t even Irish. This Sunday Mass in Limerick is said in Polish for some of the thousands of immigrants who poured in during the economic boom of the past decade. But it’s hard to find an Irish congregation this packed, and especially this young, in bigger cities.

PATSY McGARRY (Religious Affairs Correspondent, The Irish Times): People still identify themselves as culturally Catholic even though they no longer go to Mass or go to confession. You’ll see them at first communions, you’ll see them at confirmations, and you’ll see them at funerals. They’re taking very much an a la carte view to the practice of their religion.

POTTER: As recently as the 1970s, almost 90 percent of Irish Catholics went to Mass at least once a week. Today, the number is closer to 25 percent. And in some parts of Dublin, just two or three percent of self-described Catholics regularly go to church. 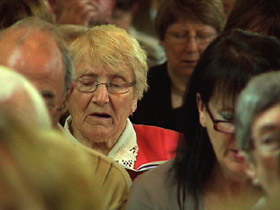 (speaking to Irish woman): Did you grow up Catholic by chance?

POTTER: Do you go to Mass now?

WOMAN: Not really that much. No, not much at all.

MAN: Weddings and funerals, things like that. That’s basically it.

POTTER: Those who do go for special occasions like this prayer service in County Galway can’t help but notice that the people in the pews have changed.

REV. TONY FLANNERY (Association of Catholic Priests): They’re old. That is the main thing. When you look down at a congregation from the altar now you’ll see mostly gray heads. The young people, the under 40s, have largely deserted the church in Ireland now.

POTTER: Irish priests are aging, too—on average, they’re well over 60. Many are still working into their 80s, and replacements have slowed to a trickle. At Maynooth, the country’s only Catholic seminary, the number of students being ordained to the priesthood has never been lower.

REV. HUGH CONNOLLY (President, Maynooth Seminary): Twenty years ago you could have been certainly over 20, maybe not that unusual to have a year where there would have been 30. Now we’re more likely to have somewhere under 10. Six, seven, that kind of thing.

POTTER: In the diocese of Dublin, not a single priest will be ordained this year—or next year. It’s been a stunning decline for a church that once virtually ruled the country. 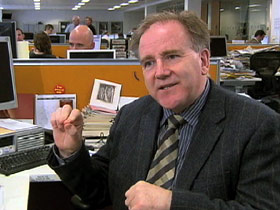 McGARRY: It was a huge organization. It was like an alternative state within the state. It ran our schools, it ran our orphanages, it ran our reformatories, it ran most of our hospitals, and so therefore you can get an idea of the scale of what the Catholic Church was. It was an alternative society within Ireland.

POTTER: The Catholic Church here in Ireland saw its influence begin to wane with the social upheaval of the 1960s. But in the past twenty years, two factors combined to accelerate its decline: sudden prosperity and the shocking revelations of sexual abuse. The worldwide recession stopped the so-called Celtic Tiger in its tracks, but consumerism had already weakened the church’s hold on the Irish people, who had become far better educated over the previous 40 years.

POTTER: The body blow, however, came from the clergy abuse scandals that hit harder and closer to home in Ireland than anywhere else. Here, almost everyone knows someone who’s been affected.

FIRST WOMAN: Maybe we as older people did a lot of covering up. Also, we were very much into appearances, putting our best foot forward, saying the right things.

SECOND WOMAN: I think with all the scandals that have been revealed, it certainly made people think more and question a lot of things that were happening. 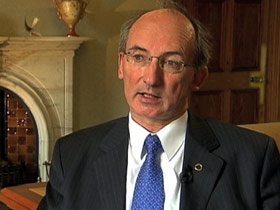 PEADAR CREMIN (President, Mary Immaculate College): Those who had a shaky faith now had an excuse for walking, because why would you go to the church every Sunday morning to hear somebody who potentially is in league with child abusers, and I think many people used the backlash against child abuse as a basis for saying, “Do I really want to subscribe, do I want to contribute, do I want to be part of that type of a church anymore?” I think at the heart of our problem is in a sense the church has lost its moral authority. The church has lost its right to speak out on issues.

POTTER: The abuse was a betrayal of trust, Pope Benedict acknowledged in a pastoral letter last year to Irish Catholics, his first-ever apology for the sexual abuse of children by priests. This year, during an extraordinary liturgy of lament and repentance at Dublin’s Pro-Cathedral, the Archbishop of Dublin and Boston’s Cardinal O’Malley prostrated themselves, asking God and the victims for forgiveness. But it hasn’t been enough.

FLANNERY: It’s a crisis, and it’s not one of the future. It’s one of right now. It’s quite extraordinary an organization as big and as ancient as the church that we cannot face a crisis that’s right at our doorsteps and begin to talk realistically about it.

POTTER: The kind of change Father Flannery advocates would be dramatic. 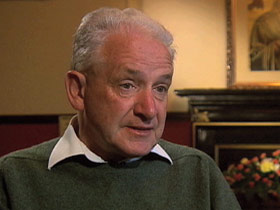 FLANNERY: Opening up the ministry of the church to lay people, to married people, to priests, to women. In other words, not confining it to the male celibate priesthood as we’ve had in the past, because clearly that is not working now, so we have to begin to think in different ways, but the Vatican is increasingly forbidding any discussion on that.

POTTER: Still, there are small signs of renewal. Some parishes now have lay people in positions that would have been unthinkable a generation ago. Kevin Mullally is a full-time pastoral worker. Sheena Darcy works for the International Eucharistic Congress.

KEVIN MULLALLY: They’re also searching for basic things, belonging and love and, you know, acceptance and tolerance, and all those elements go together in a spirituality.

SHEENA DARCY: Yes, there’s that acknowledgment that what happened was dreadful. It was absolutely dreadful. However, we do also, we do need to move on.

POTTER: Whatever happens, the Catholic Church in Ireland has already changed irrevocably.

McGARRY: I do believe Catholicism will continue, will survive in Ireland, and I do believe the clerical church will not. That doesn’t mean there won’t be priests, of course there will be, but I don’t think as a force it will ever again, in my lifetime certainly, will never have the power it had when I was a child. And I think that’s a good thing because it abused its power massively, and it became, I mean, a dictatorship in a democracy which was answerable to nobody.

CREMIN: I still have the view that what’s happening is actually something quite healthy, because the church we will end up with will be a church of committed, passionate, and dedicated people who will live the gospels rather than talk about them.

POTTER: That undoubtedly means the Irish Catholic Church will be smaller, but it may be, in a very different way, stronger.

For Religion and Ethics Newsweekly, I’m Deborah Potter in Dublin.