LUCKY SEVERSON, correspondent: It was a huge surprise when the legislature of one of the most conservative states passed one of the more liberal immigration laws in the country. That legislation will most likely be preempted by federal law, but the bigger surprise was how it angered so many members of Utah’s predominate faith, the Church of Jesus Christ of Latter Day Saints, otherwise known as the Mormons or LDS, even though it was the church that pushed through the legislation. This is Utah state senator Curt Bramble, a Republican and Mormon who helped craft the bill.

SENATOR CURT BRAMBLE: Personally I have not seen the LDS church lobby any issue harder than they’re activity on House Bill 116, the immigration legislation.

RON MORTENSEN: I jokingly said, you know, they may as well just pitched a tent in the back halls.

SEVERSON: Ron Mortensen is a career foreign service officer and a former Mormon missionary. He founded the Utah Coalition on Illegal Immigration and he’s not too happy with his church. 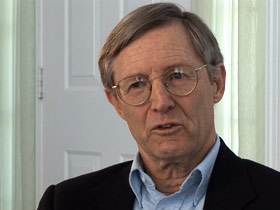 MORTENSEN: The church lobbyists had full access where normal people can’t go, in the back halls and through all the back alleyways and they were there full time this session.

SEVERSON: And the result was legislation that would allow undocumented immigrant families to continue living and working in the state, providing, among other things, they have no criminal record and pay a fine for being in the country illegally.

Originally the legislature was only going to pass an enforcement bill similar to the controversial one in Arizona until a compact of churches and the chamber of commerce asked for an additional bill with a more compassionate approach.

Critics like Representative Chris Herrod, a Republican and former missionary, say the bill was forced on the legislature.

REP. CHRIS HERROD: I’ve never in 5 years seen a bill pass in the fashion that that was passed.

SEVERSON: Because of the church? 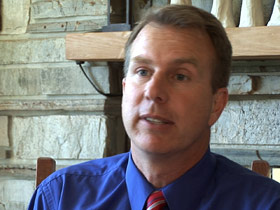 REP. HERROD: Well, some could argue that but again that doesn’t make it right.

SEVERSON: Tim Chambless is a professor with the Hinkley Institute Of Political Science at the University of Utah.

PROFESSOR TIM CHAMBLESS: We do know that the Utah State Legislature is unique because about 91 percent of the 104 members of the Utah State Legislature self-identify as LDS.  And each member, almost each member would say they’re a good church member. They’re a member of the Republican party and their a good church member and they’re very divided on this issue.

SEVERSON: At first is was not widely known how hard the church had lobbied for the guest worker law. So why did it? The church says it was the Christian thing to do, that the bedrock moral issue is how we treat each other as children of God. Quin Monson is a political science professor at Brigham Young University. 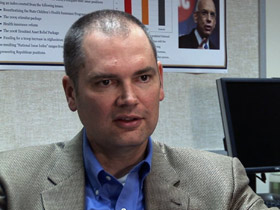 PROFESSOR QUIN MONSON: There is an approach that the church has been supporting that allows people to square themselves with the law—it’s allowing people to live without fear, to stay with their families, to pay a fine and come out of the shadows.

SEVERSON: But in the view of the legislation’s opponents, it provides amnesty for law breakers, and goes squarely against one of the church’s 13 Articles of Faith, number 12.

MORTENSEN: It basically says we honor, obey and sustain the law of the land and that’s something that all the children learn when they’re growing up and especially the older generation. It was something that was drummed into you and that was just like one of the Ten Commandments, and so when people see people not complying with the law, that makes them nervous and raises questions.

SEVERSON: Ron Mortensen doesn’t argue with the compassion of his church, but he thinks the bigger reason for the legislation is that the church has grown far beyond U.S. borders.

MORTENSEN: In my opinion, the church has become a worldwide church and its interests now extend far beyond Utah, and it has to meet the expectations of its worldwide audience and a very large audience in Latin America.

SEVERSON: The church has over 14 million members worldwide, with more than half residing outside the United States.

MONSON: The population of Mormons in Mexico is hundreds of thousands if not over a million. There are at least a dozen temples of the church in Mexico and hundreds of chapels, so it’s a big population and it’s big all throughout Latin America. 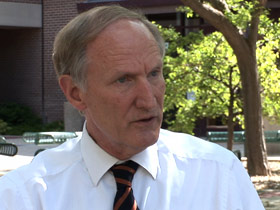 CHAMBLESS: The church is concerned that anything that hurts its missionary effort is going to be something that maybe the church would not support.

MONSON: Utah is very cleanly connected with the church in a lot of people’s mind, outside of Utah and outside of the United States. And so if Utah is enacting some draconian restrictive immigration law, you can sort of imagine the reaction and then the blame that might be placed on the church for allowing it to happen. I can see that that might have been a motivating factor in getting involved and asking the legislature to dial it back.

MORTENSEN: There’s been pretty credible stories about withholding visas for missionaries in order to bring pressure on the church, so they’re playing in a very international arena. It’s no longer what’s necessarily good for Utah or even the United States, it’s what’s good for us worldwide.

SEVERSON: Mortensen says it might surprise some members to learn that the church sends undocumented members that live in the U.S. on stateside missions.

MORTENSEN: It’s long been the policy of the church to allow undocumented members to have temple recommends and to hold the priesthood, and it’s up to the bishops to decide if they’re worthy of that or not.

SEVERSON: Undocumented missionaries have been deported, and recently two minor church officials and their families were expelled from the country because they were here illegally. The church says it discourages members from entering any country without legal documentation. 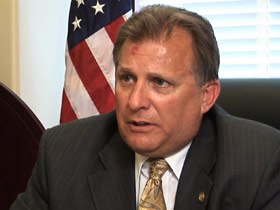 For those who argue that a guest worker law violates federal law, others like Senator Curt Bramble, refer to a higher law, and uses the church’s harboring of runaway slaves as an example.

SENATOR BRAMBLE: During the 1860s, before the Civil War, members of the church that harbored slaves because slavery was immoral, was a violation of the law. We can talk throughout the history of mankind where laws that are on the books or laws that someone is demanding you follow result in an outcome that in and of itself is a violation of a higher law.

SEVERSON: Mortensen says the church’s view of the law may be changing because he thinks the church itself is changing.

MORTENSEN: The LDS church seems to be moving towards more of a social justice position and away from conservatism where it’s traditionally been.

SEVERSON: The pushback against the immigration law has been so public, delegates to the state Republican convention narrowly passed a resolution demanding that the law be repealed. Professor Quin Monson has done a study about how influential church endorsements can be with the membership, and he says as more members know how strongly the church feels about a guest worker provision, the tide may turn.

MONSON: When the church comes out and officially endorses a position and it’s united and the membership knows about it, then you see people shifting their position and this is even true when the issue pushes the membership in a direction that they might not otherwise want to go.

MORTENSEN: This is really a very, very divisive issue and I never have—on other issues—I never have heard people say, well, I’m going to stop paying fast offerings or I’m going to withhold some of my contributions or I’m really questioning my testimony, and I’m having people say that to me on this particular issue.

SEVERSON: Opponents say they’ll try to derail the guest worker law during the next legislative session although it seems unlikely they will succeed. For Religion & Ethics NewsWeekly, I’m Lucky Severson in Salt Lake City.