BOB ABERNETHY, anchor: Top Roman Catholic and Anglican leaders from around the world this week launched a new effort to support Christians in the Holy Land who are caught in the ongoing conflict between Israelis and Palestinians. They also called on politicians to jump-start the stalled Middle East peace process. The new campaign got underway at a high-level meeting in London. Kim Lawton was there.

KIM LAWTON, correspondent: Christian leaders from Europe, North America, and the Middle East gathered at the historic Lambeth Palace, residence of the Anglican Archbishop of Canterbury, Rowan Williams. The meeting was co-hosted by Williams and the Roman Catholic Archbishop of Westminster, Vincent Nichols.

ARCHBISHOP ROWAN WILLIAMS, Anglican Archbishop of Canterbury: We cannot wait for the politicians to sort it out before we as civil society, as active agents, as people of faith, get on with making the differences we can make. 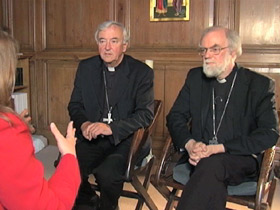 LAWTON: A main focus was how to shore up the minority Christian community in Israel and the Palestinian territories. Because of emigration and low birth rates, Christians now make up less than two percent of the population there.

WILLIAMS: That’s the very specific and the very practical challenge: Have these people a future in their ancestral home? We hope and pray that they do.

ARCHBISHOP VINCENT NICHOLS, Catholic Bishops Conference of England and Wales: The Holy Land and the holy sites could become something like the Colosseum, you know, the remnants of something that is of great historical interest and maybe of cultural interest, but not lived in, not living and breathing centers of life and prayer.

LAWTON: The leaders discussed concrete ways to help the predominantly Palestinian Christian community, such as financial support, building more relationships between congregations, and increasing public policy advocacy. As part of that, the group specifically called for an end to security restrictions that prevent local people of faith from visiting their holy sites. Conference organizers denied criticism from some quarters that supporting Palestinian Christians makes one “anti-Israel.”

NICHOLS: What we want to be in being pro-Christian is also being pro-Israeli and pro-peace.

LAWTON: The group heard from a variety of voices, including Jews and Muslims. Participants all agreed that working for an end to the Israeli-Palestinian conflict would be the biggest help of all.

BISHOP GERALD KICANAS, Catholic Diocese of Tucson: Ultimately, what we need is a two-state solution where these two peoples can live together in peace, each in their own sovereign states, respecting the boundaries and respecting the rights of those states. But we’re not there yet.

LAWTON: The leaders said the conversation was valuable. But, as always, the big challenge will be turning talk into action.

ABERNETHY: Kim will have a special report from the Holy Land next week.