KIM LAWTON, correspondent: In New York’s mid-Hudson Valley, Aziz Ahsan, his wife, and three kids are looking at some old photos. These family times are becoming increasingly rare now that the two oldest children are in college. Ahsan says he values these moments more than ever.

AZIZ AHSAN: 9/11 for me was an event that made my relationship with my family stronger, because now that every time I look at my family I am thankful that I am alive. I can touch them, I can feel them, and so it has created a stronger bond.

LAWTON: Ahsan, who is Muslim, was at the World Trade Center on 9/11. He went to the post office there to buy a special new Islamic-themed stamp. Just after he left the plane hit, and he was struck by pieces of the crumbling tower. Hours later, Ahsan was able to make his way home covered in debris, with serious eye injuries.

SHAHZAD AHSAN: I remember walking over to him and wanting to hug him, and he said, “No, don’t. Wait. Don’t get all this stuff on you.” But I just hugged him anyway because I just had to. 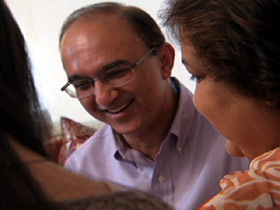 LAWTON: Ahsan put his debris-covered clothes in a bag. He says he hasn’t opened it again since he showed them to me nine years ago. He keeps the bag in his garage and hopes to donate the clothes to a 9/11 museum. Shahzad was 13 when the attacks occurred. He told me he felt a backlash from people who blamed all Muslims.

SHAHZAD AHSAN (file interview): I couldn’t understand why people would hate Muslims when they were the victims of the attack as well.

LAWTON: Ahsan decided he and his family should reach out to their community and show a different view of Islam. He got involved in local causes, was appointed to the zoning board of appeals, and successfully ran for president of the school board.

AZIZ AHSAN: When people like myself and others who stood up and made Muslim a household name or became part of the news stories on a regular basis, it made it that much easier for people to realize that Muslims are in our community.

LAWTON: He and his family created and now sell a Muslim identity symbol. It can be placed in a window or on a desk and in its large form, a public park. 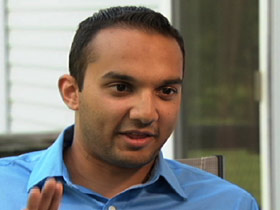 LAWTON: The Ahsans also got involved with interfaith projects. Shahzad and several Muslim friends worked with Jewish teens on a “Salaam-Shalom” video project to create awareness about anti-religious bigotry and bullying.

SHAHZAD AHSAN: When I was younger my father was really big on trying to get me to understand that this is important. Even what seems like small events are important, because you might be the first Muslim friend someone’s ever had.

LAWTON: Shahzad is now studying political science at the University of Chicago and hopes to find positive ways of portraying American Muslims. His father says that’s the lesson they all learned from 9/11.

AZIZ AHSAN: Those opportunities became much more available after 9/11, and for people like me who participated, got involved, reached out, the community reached back, and it’s important for the rest of the Muslim American community to get more involved. Don’t be shy. Don’t be afraid.

LAWTON: In western Pennsylvania, the small town of Shanksville looks much the same as it did ten years ago before passenger resistance brought down hijacked Flight 93. But this town was indelibly altered on that day. 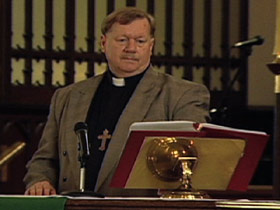 LAWTON: Lutheran pastor Robert Way had arrived in Shanksville just days before 9/11. It was his first church assignment.

WAY (file interview): I honestly do not believe that the people of this area would have welcomed me as openly as they have already had it not been for the flight. I think it has really framed what my ministry has been but also has opened not only myself to them, but their lives to me.

LAWTON: He says the crash continues to have a spiritual impact for him.

WAY: Probably emboldened more in my spirit, just to understand that evil is a part of our world. Evil can touch even those of us who are in rural western Pennsylvania. 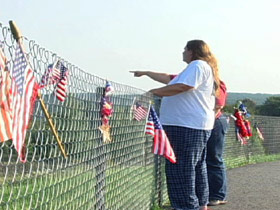 LAWTON: Ten years after 9/11, Way has just arrived at a new assignment at St. John Lutheran Church in Clearfield, about 70 miles away. But he remains heavily involved in Shanksville. He’s an ambassador for the Flight 93 National Memorial and volunteers at the park every week, retelling the story of what happened there, both the tragedy and the heroism.

LAWTON: At the site of Ground Zero in New York, Greek Orthodox parishioners are frustrated that plans to rebuild St. Nicholas Church have been locked in stalemate.

LAWTON: St. Nicholas Greek Orthodox Church was the only house of worship destroyed on 9/11. When the towers fell, the tiny church never stood a chance.

JOHN PITSIKALIS (St. Nicholas Greek Orthodox Paris) (file interview): The debris from the south tower literally pancaked our church. You know, it was an unbelievable amount of debris on it. 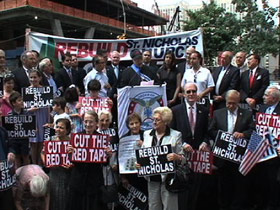 KOKOTAS: This is now a sacred ground, and whatever your denomination is you have to respect the fact that many lives were lost. So the role of the church and that relationship with God and oneself plays an even more important role for the people that are going to be coming here, and St. Nicholas could fill that role for these people.

LAWTON: At Congregation Mount Sinai in Brooklyn Heights, Rabbi Joseph Potasnik says the lingering spiritual impact of 9/11 is profound. He was and still is a chaplain for the New York Fire Department and says he’s been especially inspired by the families of the 343 fire fighters who died on 9/11. 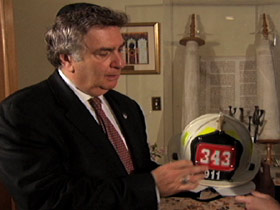 RABBI JOSEPH POTASNIK (Congregation Mount Sinai, Brooklyn Heights, NY): So this is a special reminder of many, many special people who are in our midst and who were in our midst.

LAWTON: Potasnik has experienced 9/11’s aftermath on several fronts: as an FDNY chaplain, executive vice-president of the New York Board of Rabbis, and spiritual leader of a synagogue just across the river from Ground Zero. The twin towers loomed large for his congregation, such as during High Holiday services, when they would walk down to the water for the traditional Tashlikh ritual. Eight years ago, Potasnik told us his people had been deeply scarred.

POTASNIK (file interview): You can’t often heal a scar, but you can cover it, and what we try to do, at least in the spiritual world, is teach people how to cover some of those scars so they can continue to live, and life still has meaning and purpose.

LAWTON: I asked him if some healing has now occurred.

POTASNIK: The healing has taken place because we’re inspired by those who have lost so much and yet love so much and want to live so much. I meet families all the time that have a hole in their hearts, and yet they continue to bring comfort to others. Have we healed? Yes. Healed with a hole. It’s never a complete healing, but at least there is that willingness to write a new chapter of life.

LAWTON: Postasnik has seen some new interreligious tensions, such as the controversy over plans to build an Islamic center near Ground Zero. But he says 9/11 has also opened the door for more interfaith cooperation.

POTASNIK: Those who destroyed those buildings, they wanted to separate us. They don’t want to see Muslims, Jews, and Christians and all the other groupings standing with one another. So the best message that we can convey to those that hate us is, “You will not prevent us from being one family.”

LAWTON: The 9/11 tenth anniversary, he says, is stirring up lots of memories and emotions. This photo was taken when Potasnik visited a makeshift shrine for his fellow fire department chaplain, Father Mychal Judge, who died with other first responders on 9/11.

POTASNIK: The day before 9/11 in the year 2001, I was together with Father Mychal Judge. We stood at a rededication of a fire house. He said in life you have to learn to hold on to memory, hold on to the moment, and hold on to one another. That’s what he said the day before he lost his life. Isn’t that what we’re doing on this anniversary? Isn’t this what we are doing every day?

LAWTON: And if we’re not, he says we should be.