FRED DE SAM LAZARO, correspondent: In thousands of schools across India, teachers will tell you to add one more “R” to reading, ’riting, and ’rithmetic. Recess, they’ll tell you, may be the most critical part of a student’s school day. That’s because nine a.m. recess is when 300 students in this school in the northern province of Rajasthan are provided a hot meal, as are a few younger siblings who are allowed to come along.

DINESH SHARMA: In this school, only about five children in all are able to bring a lunch from home.

DE SAM LAZARO: Anywhere from a third to 40 percent of the world’s undernourished children live in India today, and about half of all children here have stunted growth. The statistics are all the more telling given India’s strong growth rate and its booming economy in recent years.

BIRAJ PATNAIK: India finds itself acutely embarrassed. Its ambitions of being a global power are very poorly reflected in social sector indicators, and there is acute embarrassment that the second-fastest growing economy in the world has almost half of its children malnourished. 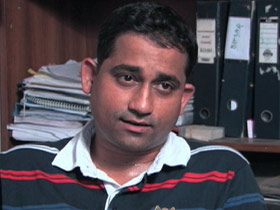 DE SAM LAZARO: Patnaik works for India’s Supreme Court advising a commission that monitors compliance with the court’s orders. About a decade ago, civic activists, saying the government was denying children their basic right to food, took their case to the court. The justices twice upheld this right and ordered that every child be provided a cooked meal in school. At first, Patnaik says, there was resistance from government officials.

PATNAIK: On the grounds that there was no infrastructure, that teachers would get overburdened, that India just didn’t have the financial resources to start a program of this nature. But the Supreme Court reaffirmed that fiscal constraints can never be allowed to come in the way of children’s right to food, and if the government had to tighten their belt, that had to happen elsewhere.

DE SAM LAZARO: With the stroke of a pen, the court ordered the largest school meal program in the world. That left the daunting task of implementing it.

CHANCHALAPATHI DASA: The challenge in our country is how to deliver it and deliver it up to the last mile. That is the challenge. Because a large country with 120 million children in hundreds of thousands of schools that delivery is a genuine challenge. 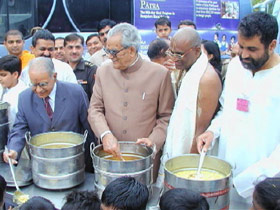 DE SAM LAZARO: Dasa heads a nonprofit group called Akshaya Patra. It was started in the nineties when a group of Hare Krishna devotees began preparing a few hundred school lunches. Although it is one of the world’s oldest belief systems, the modern day Krishna consciousness movement was led by Swami Bhaktivedanta Prabhupada and was especially visible in the West in the 1960s and ’70s. The call to serve meals was inspired by an encounter the swami had after attending a banquet.

DASA: He saw there was leftover of all the food, and the plates strewn there, and there was street children, poor children from the village and some stray dogs fighting for the leftover of the food. When Prabhupada saw that there were tears in his eyes, and he called some of his disciples and said, “Just look at this. You can’t allow this to happen.”

DE SAM LAZARO: That exhortation formed the spiritual basis for Akshaya Patra’s work. But when school lunches became the law of the land, the group went to the government for funds to expand and to India’s corporate sector for expertise.

DE SAM LAZARO: And with their wallets. Among India’s growing middle class there’s a dawning of philanthropy, he says. Many people are attaining wealth at a much earlier age. 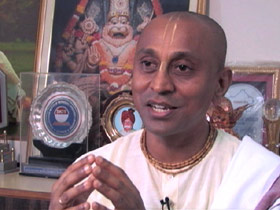 DASA: My parents probably would have a house—we come from a middle-class family—would have a house when they were probably 50 years of age. In today’s India, by the time someone—and someone working in a software company in India—by the time they are 28 or 30 years old they already have a house, they have a car, and then what? They still have a lot of disposable income, and they are genuinely looking for opportunities where their money can be used well for social development.

DE SAM LAZARO: Akshaya Patra, which means “bottomless pot,” is now the largest of many nonprofit school lunch providers. It serves 1.3 million children every day from kitchens like this one, efficient and productive as any in the world.

GOVINDA DAS: Every day we cook about 150,000 meals in three hours time, and the ingredients that we use, something like 7000 kilograms of wheat flour every day, and from that we make about 300,000 chapatis—flatbreads—per hour. 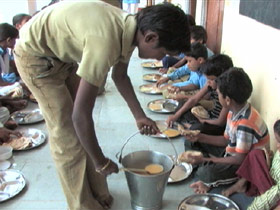 DE SAM LAZARO: Hours before students show up at school, workers begin feeding wheat flour and water into giant mixers. At the other end, lightly greased flatbreads called chapatis emerge, 40,000 of them every hour, in spotless conditions. Elsewhere, in industrial-sized cauldrons, rice and a lentil stew called dhal are prepared. Flavoring varies by regional preference, but there are no animal products. Hare Krishna devotees are vegetarian in principle. So are most students, by economic necessity. In Rajasthan’s desert summer, school starts early, and the meal arrives as early as nine a.m. Four years after Akshaya Patra began delivering meals in this area, the most visible impact is in school attendance. It’s up 11 percent, no surprise to the principal.

MADHU KILANI: They belong to very poor families. They belong to labor-class families, and their parents are also not very much literate. And some of the students have, their economic condition is so poor that at night also they are not able to eat food in their home, so they depend, many of their strengths depend on their midday meal.

DE SAM LAZARO: She says the students have more energy and improved concentration in class. For its part, Akshaya Patra aims to expand its lunch program five-fold by 2020. Still, not all children have benefited equally from the Supreme Court’s order, says compliance officer Patnaik.

PATNAIK: Jharkhand, for instance, is a state where I often visited, and I despair at the quality of the meals that are being served there. Even in states where the meals work well, in the more inaccessible and remote parts of the state you have meals which are not comparable at all in quality to what children in the rest of the country are getting.

DE SAM LAZARO: “We like it,” these children said when asked about their Akshaya Patra meal. When I asked how many students have to go hungry on days when there’s no school, the response was also nearly unanimous. And they are the more fortunate. Despite the Supreme Court order and despite recent initiatives to address it, malnutrition is the root cause of 2500 child deaths in India—every day.

For Religion & Ethics Newsweekly, this is Fred de Sam Lazaro in Jaipur, India.