LUCKY SEVERSON, correspondent: Like many church leaders in Alabama, Father Tom Ackerman of the Catholic Diocese of Birmingham was caught off guard by the toughness of the state’s new immigration bill.

FATHER TOM ACKERMAN: I think there was some surprise about how extreme it was and how really sort of vicious it was, particularly some of the vicious rhetoric: “We want to affect every aspect of their lives. I’ll do everything short of shooting them.” These are senators and representatives saying these things.

SEVERSON: Here’s what Mayor Lindsey Lyons of Albertville, Alabama had to say about the bill’s critics. 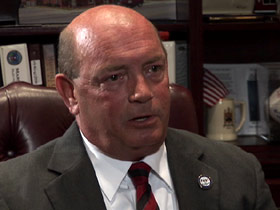 SEVERSON: The solution the legislature came up with has caused quite a commotion. A federal judge temporarily blocked the enactment of House Bill 56 because of several lawsuits filed by four Alabama bishops of different denominations, the Justice Department, the ACLU, civil rights groups, joined by county sheriffs and 16 foreign governments. But some of the loudest protests came from church leaders like Pastor Angie Wright of the Beloved Community United Church of Christ.

PASTOR ANGIE WRIGHT: If I have ten undocumented persons in my church for an English-as-a-second-language class, or for worship, or vacation bible school. and I know that they’re undocumented, I can go to prison for 10 years and pay a $15,000 fine.

SEVERSON: In a nutshell, the bill, as it stands now, criminalizes working, renting, having false papers, shielding, harboring, hiring. and transporting undocumented immigrants. It also deprives them of most local public benefits. As it was intended, it punishes just about every aspect of illegal immigration. 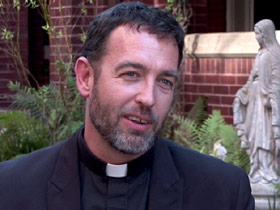 FATHER ACKERMAN: The reason why we’ve filed this suit is because we want to keep the government out of our business. The government is trying to tell us what we can or can’t do in terms of works of mercy, works of charity, which are fundamental to our faith.

REPRESENTATIVE DAN WILLIAMS: Coming up on the left is where most of the Hispanics worked in town. This was the poultry processing plant.

SEVERSON: Representative Dan Williams was Mayor of Athens, Alabama for 18 years until he ran for the legislature 3 years ago. He supports House Bill 56.

REP. DAN WILLIAMS: The vast majority of people, when I was running for this office, the number one or two issue with them was illegal aliens. That’s it. Illegal aliens: “You need to do something about them. We want something done about them.” 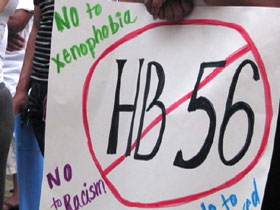 SEVERSON: Williams was elected with the first Republican sweep of both houses in the legislature and the governorship in Alabama history. The new legislators quickly hammered out an immigration law, one that terrifies Janeth, an undocumented mother of two from Mexico who has been in the US for more than ten years. She’s a cashier in a store. Her husband works in construction.

JANETH ( with translator Helen Rivas): It’s terrorizing. Ever since they passed this law we don’t go out. We don’t go to restaurants, we don’t go to the park. We see a patrol car, and it terrifies us to think they may stop.

SEVERSON: She and her husband are buying their home at a very high mortgage rate. The new bill would allow the bank or anyone they have a contract with to cancel the contract, and they would have no recourse.

JANETH: I came here because my family didn’t even have any way to eat. To get this we’ve worked day and night, three jobs. If I have to leave here, one day to the next, if this law goes into effect I’m going to have to leave my house, my car. We’re going to arrive back home in our home countries in worse shape. 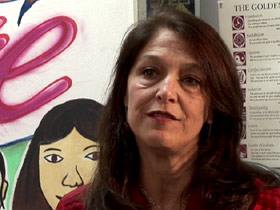 PASTOR ANGIE WRIGHT: Why make criminals out of people who have been our neighbors and our brothers and sisters and really are not causing any problems for any of us?

SEVERSON: An Alabama criminal justice survey found that violent crime in the state is down 10 percent over last year and below the national average. Property crime is also down. But Albertville Mayor Lyons says those statistics don’t hold up in his town.

MAYOR LINDSEY LYONS: When you have people coming from other countries that’s never driven a car before, and they start driving here with no insurance, no driver’s license, etc, causing multiple, many accidents.

SEVERSON: But, he says, that wasn’t the worst of it.

MAYOR LINDSEY LYONS: Because invariably you’re going to have the underlying current of crime and criminals come in with an influx of illegal immigrants, and that all is based on prostitution and brothels, your drug activity and your drug gangs, which have been present here in Albertville. That’s like it is in any community where you have the immigrant issue.

SEVERSON: He says hundreds of illegal immigrants moved in after Albertville-based poultry companies advertised in Mexico looking for cheap labor. 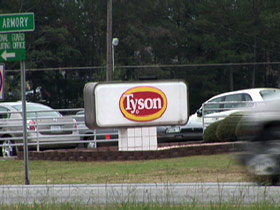 SEVERSON: The Pew Hispanic Center estimates there are between 85,000 and 120,000 undocumented immigrants in Alabama, comprising a little less than 4 percent of the workforce. The state’s unemployment rate is above the national average at about 10 percent.

REP. DAN WILLIAMS: You know, I go back “it’s the economy stupid,” that’s what it always is and people can say what they want to, but when you got a job and you’re making some money and your family is doing alright, you don’t have problems. But when my children lose their jobs, and I start having to help my children and my grandchildren, and maybe if I lose my job, I’m concerned about a guy who’s illegal coming here working. He’s doing okay and I’m not. 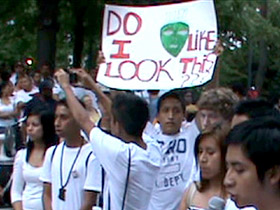 SEVERSON: The legislation authorizes police to demand papers from people they stop who they suspect are undocumented, something opponents say will lead to racial profiling. That’s already happening, according to Father Ackerman.

FATHER ACKERMAN: One of our priests actually has been stopped several times, pulled over. And then once they see that he has a collar on, “Oh, Father, go ahead.”

SEVERSON: Religious leaders are concerned that they will be breaking the law if they transport members they know are illegal to church.

FATHER ACKERMAN: If we’re transporting illegal immigrants, that’s a violation of this law, and those vehicles can be confiscated.

FATHER ACKERMAN: If that wasn’t going to happen then they should have written that into the law. I’m talking about how the law is written, not how they expect it to be applied. 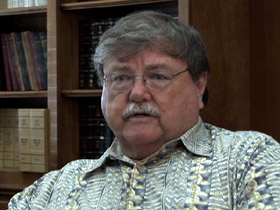 SEVERSON: Williams says he and his Republican colleagues have been called racists and that it’s unfair.

REP. DAN WILLIAMS: People still look at Alabama, and they see those grainy films from the 1960s and the police dogs and the water hoses in Birmingham. Well, Alabama is not like that anymore, but they’re trying to bring this back, that that’s what we are.

Speaker at rally: I myself overwhelmingly love this country.

SEVERSON: The young man speaking here, Victor, was brought here by his parents when he was a toddler. Victor is undocumented and part of a group of high school kids calling themselves Dreamers, who have been very vocal against the law because they’re the one’s who will likely suffer the most if they or their parents are deported. This is Jose. He’s undocumented. He says his dream was to become a teacher or a doctor.

JOSE: I came here at the age of 3. In all honesty, Mexico, it seems like a foreign world to me, and with all the problems it has now it’s frightening, the thought of having to go back there.

SEVERSON: Eduardo has his papers, unlike many of his friends.

EDUARDO: I’m mostly sad because I’ve got papers and then my friends, most of them are going to have to go back to their country or whatever, and I’m here lucky, being able to have the education and all the benefits they can’t.

SEVERSON: The judge who stayed the enactment of the law says she will issue her decision by September 29th. Regardless of the outcome, it is likely to be appealed.