KIM LAWTON, correspondent: Nestled in the hills between Tel Aviv and Jerusalem is a small village called the Oasis of Peace—in Hebrew, Neve Shalom and in Arabic, Wahat al-Salam. While the Middle East conflict continues to churn all around, here they are trying to create a different reality, one that says Israelis and Arabs can live side-by-side in peace.

LAWTON: Neve Shalom/Wahat al-Salam was founded more than 30 years ago by an Egyptian-born Dominican monk, Father Bruno Hussar, who died in 1996. He wanted to create a place where Jews, Muslims, and Christians intentionally lived together in mutual understanding and respect. 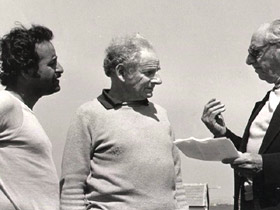 NAJJAR: His interest was to deal with the conflict. Why do we have a conflict? How can we influence the dynamics of the conflict and how can we change it for dynamics for peace building?

LAWTON: Abdessalam Najjar is an Arab Muslim from the Galilee region of Israel. He was part of the first group to move here 33 years ago.

NAJJAR: You ask me a very difficult question. You assume that I know the answer. I don’t know. For me, I said, ah, it’s a way that we can deal with the conflict in an alternative way. Cooperation instead of confrontation. Dialogue instead of fight.

LAWTON: Today, 55 families live here, and another 30 families are in the process of moving in. Others are on a waiting list if space becomes available. The community screens applicants and chooses who will live here.

NAJJAR: We need groups that are capable to understand that differences between us and not trying to change the other, mainly to work on the self, and the transformation will start from within and not transforming the others. 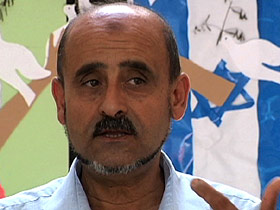 LAWTON: In Neve-Shalom/Wahat al-Salam, there’s a big emphasis on education, not just for those who live here, but for the greater community as well. The bilingual Hebrew Arabic primary school has 200 students, the vast majority from outside the village.

LAWTON: And there’s adult education as well. Nava Zonenshein directs programs at the School for Peace, which sponsors encounter groups and conflict-resolution seminars.

NAVA ZONENSHEIN (Oasis of Peace): People have to learn history they didn’t know of the other side, learn power relations and how to share more equally, learn how to change the images that they have of the other side. So these are challenges we have to deal all the time with.

LAWTON: Zonenshein, who is Jewish, also moved to the village more than 30 years ago. She raised her three children here.

ZONENSHEIN: They don’t see the other as an enemy. Everywhere they go they will fight for equality, for justice, so it’s something very deep in their experience, not just they heard about it but they lived this. 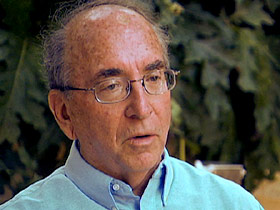 LAWTON: Rabbi Ron Kronish says Neve Shalom/Wahat al-Salam is one of several interfaith projects taking place despite the ongoing tensions in the region.

RABBI RON KRONISH (Interreligious Coordinating Council in Israel): These things don’t make the news. I often joke, because we don’t kill anybody, we don’t make the news and we don’t make page one anyway. So I’d like people to know that there are a lot of people in this country who are into dialogue, education, getting to know one another, trying to live together.

LAWTON: Kronish has lived in Israel for 32 years and directs the Interreligious Coordinating Council based in Jerusalem. Interfaith work here has two tracks. One is promoting dialogue inside Israel proper between the majority Jewish population and the 20 percent who are Arab Muslims and Christians. The other track is promoting dialogue between people from Israel and the Palestinian territories, which can be especially difficult given security concerns. Kronish says the ongoing political stalemate does complicate all their work. 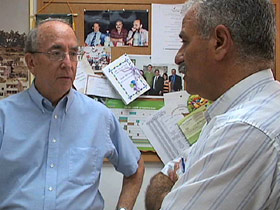 ISSA JABER ABU GHOSH (Interreligious Coordinating Council in Israel): When sometimes there is something on the political arena, the conflict, some, let me say, violence, terror events somewhere, the whole issues became very complicated, very mixed.

LAWTON: Kronish works closely on the council with Issa Jaber Abu Ghosh, a Palestinian Muslim who lives just outside Jerusalem in the Arab town of Abu Ghosh, which is named for his family. They believe building relationships between individuals lays the groundwork for peace.

KRONISH: We don’t invite people to our dialogues to solve the problem. We invite them to get to know one another, to be in place, to do what you can, to mitigate violence and hatred.

LAWTON: Kronish admits the lack of political progress can be discouraging, but he takes heart in his interfaith work with kids.

KRONISH: My hope is more in the younger generation, to tell you the truth, who are less cynical and less tired and who don’t have easy political solutions, because we don’t have those around here, but who are reaching out to know each other, to encounter the other, to work with each other, to do small things together, to do what’s feasible at the current time. 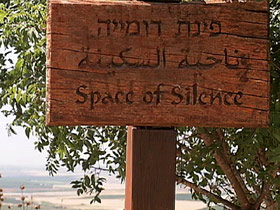 LAWTON: At Neve Shalem/Wahat al-Salam many say spirituality is also a key part of building the framework for peace.

LAWTON: Here there are many places where people of all faiths, and those of no faiths, can pray or meditate. One of the most unusual spots is called the Space of Silence.

NAJJAR: See in the shape, very beautiful, you can come inside, you can pray, you can meditate as Muslim, Christian, Jewish, Buddhist, anything, but everything should be in silence.

LAWTON: Here there are no walls and no sharp edges. Najjar says the founder, Father Bruno, believed you can’t talk to others until you talk to God and yourself. His vision was that by pursuing peace, people are doing God’s work, whatever their belief system may be.

NAJJAR: This is the most important thing, the outcome, the results. If the results is what God wants from us to do, we do it, everybody with his own way.

LAWTON: And that’s the work they intend to continue and expand, no matter what happens in the political world outside.

We visit Oasis of Peace, a small village in Israel where Jews, Muslims and Christians intentionally live together and promote a message that peace is possible. “I’d like people to know that there are a lot of people in this country who are into dialogue, education, getting to know one another, trying to, trying to live together,” says Rabbi Ron Kronish, director of the Interreligious Coordinating Council in Jerusalem.