FRED DE SAM LAZARO, guest host: We have the story of an organization founded after federal agents raided the nation’s largest kosher meat-packaging plant in Postville, Iowa, and discovered widespread mistreatment of workers. The group, Uri L’Tzedek, which means “awakened to justice,” wants more transparency in the kosher industry, and they’ve started with restaurants.

RABBI SHMULY YANKLOWITZ (Founder & President, Uri L’Tzedek): What became clear to me in Postville was that we had to take responsibility. Not a one time act like a boycott, but something systemic and sustainable that would ensure that there was ethical transparency in the industry. 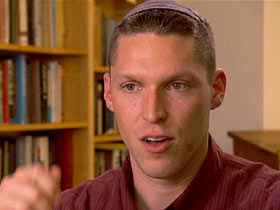 YANKLOWITZ: When we started the Tav HaYosher we said, let’s strive for the ideals. We want health care, we want animal treatment, we want environmental standards, we want fair trade, we want workers comp, all these issues, and we went into restaurants finding workers getting paid $2 an hour, $3 an hour. Ridiculous! So we said we have to first just meet law.

WEISS: One of the really exciting things about this program is that it’s a grassroots program. The people who actually go into the restaurants are volunteers, college students, graduate students, young professionals who care deeply about this mission and about this project. Every two or three months or so we have a training, and then we actually assign restaurants to each of the compliance officers.

YANKLOWITZ: There is nothing easy about the work we’re trying to engage in. We are sending young volunteers to ask owners to open their books, to speak with workers about very sensitive issues.

WEISS: We take them aside so that we create a safe space away from management, and we ask them questions to verify what the payroll actually says. How many hours have you worked? What is your pay? What’s it like to work here? Do you feel ever harassed? The feedback we receive from restaurant workers, we keep it anonymous, and we also have an anonymous tip line. 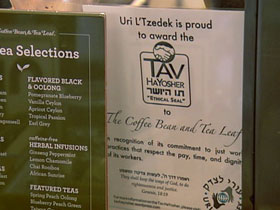 SHLOMIT COHEN (Tav HaYosher Compliance Officer): We’ve approached locations that initially didn’t meet standards. We spoke with them, encouraged them and were able to come back and actually sign them on.

YANKLOWITZ: Sitting in a dark basement with a worker who paints black and white cookies black, white, black, white all day, every day and seeing his eyes tear up when for the first time there was a customer concerned for his welfare, that rocked me spiritually, emotionally to feel the impact of merely showing somebody else that we’re present for them. We’re an advocate for them.

WEISS: We see this very much as a partnership between workers, the community, and restaurant owners.

NOAM SOKOLOW (Owner, Noah’s Ark/Shelly’s): I think I just felt as a good person, someone who believes in doing the right thing. I think it was important to set the standard. We’ve actually gotten numerous phone calls and numerous comments from customers who have come in and let us know that they are supporting us because of the fact that we have the seal.

YANKLOWITZ: This is a new wave of activism, an activism through what one eats, that what we eat and what we buy is a vote of confidence in our highest values.