Head Start Leader: What number is this, Jeffrey?

BOB FAW, correspondent: Thousands of children in Illinois have been helped the last five decades by Catholic Charities. In Joliet, for example, the agency runs this Head Start program. It also shelters and nourishes children in need. Of 15,000 in the state’s foster care program, the agency takes care of more than 2000. Now though, as director Glenn Van Cura knows, Catholic Charities is in a bitter legal dispute with the state because when it comes to fostering or adopting children, the organization will take married and single people but will not accept same-sex or unmarried couples. 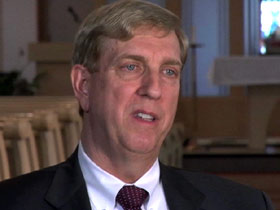 GLENN VAN CURA (Executive Director, Catholic Charities Diocese of Joliet): The idea between a man and a woman and marriage is a sacred bond, and cohabiting, gay or straight—that’s not that sacred bond. It’s not stable.

ROBERT GILLIGAN (Executive Director, Catholic Conference of Illinois): We will continue to say that children are best raised in the situation where there is a loving home and a mother and a father, and that will be true as long as we’re able here to articulate it. It’s the truth, and that’s what the church is about is trying to speak the truth to these very sometimes controversial social questions.

MICHELLE MASCARO: The church can decide whether or not they want to marry a couple. That’s a church religious right, but the state has created ways for families to come together, and they’ve said, you know, that you can come together through adoption, and it doesn’t matter what that family constellation looks like. Are you fit to be a parent? 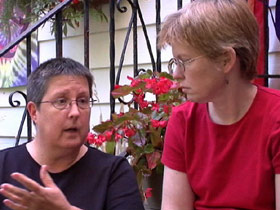 FAW: Does it anger you, what’s—because that clearly is…..

CORYNNE ROMINE: It doesn’t make me feel second-rate, because I’m not. It does make me angry, yes.

Mascaro (speaking to children): Okay, David, it is going to be your turn…

FAW: Michelle and Corynne have adopted three children, David, Joseph, and Emma. Because Emma was adopted through a religious agency, the two women felt they had to hide their true relationship.

MASCARO: And they might say no, you can’t have this baby who was our baby. You know, she came right from the hospital home with us.

FAW: Catholic Charities says it’s a matter of religious freedom and that if civil law and church doctrine collide doctrine takes precedence and gives it the right to discriminate. Bob Gilligan is with the Catholic Conference of Illinois, which is the public voice of the Catholic Church in the state.

(speaking to Robert Gilligan): When it comes to gay couples, then, they are excluded. Is that not discrimination? 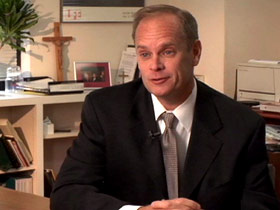 GILLIGAN: There is a form of discrimination there, sure. We don’t accept the application of an admittedly unmarried or same-sex couple.

FAW: Now the state of Illinois is in the process of cutting off the nearly $4 million it funnels annually to Catholic Charities because it says discrimination against gay or unmarried couples who want foster children is illegal and short-sighted. Kendall Marlowe is with the Illinois Department of Children and Family Services.

KENDALL MARLOWE (Deputy Communications Director): I grew up in a family that took in foster children, and I’ve been a foster and an adoptive parent myself as an adult, and if I’ve learned anything it’s that what helps a child succeed is that unconditional love and guidance, and in both my experience and in the research literature that has been produced on this issue, there’s no indication that sexuality, sexual orientation has anything to do with parenting.

BENJAMIN WOLF (Associate Legal Director, ACLU of Illinois): We need everybody. It’s hard enough to provide good homes for abused and neglected children without imposing additional discrimination on the pool of foster parents. 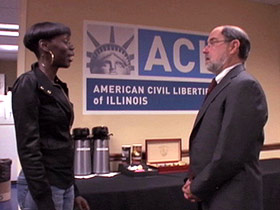 VAN CURA: There’s not one example that they can show that a child has not been placed in a home.

GILLIGAN: They’re not excluded. There’s 47 other private child welfare agencies in the state. There’s many other agencies that they can go to.

MASCARO: It’s not okay to say to people like us if we lived in a part of southern Illinois or in Peoria to say, oh, you can go to some other agency, because Catholic Charities has the lock on it. They’re the only agency out there.

FAW: Despite the fervently held beliefs on each side, the legal situation is anything but clear-cut. Catholic Charities, for example, argues that the Illinois law on religious freedom permits the agency to discriminate.

GILLIGAN: The title of the bill is the Illinois Religious Freedom Protection and Civil Unions Act. Where’s the freedom? Where is the protection for religious entities? It’s in the bill itself. There’s a section in there that says that the bill should not infringe upon religious practice, religious ministry.

MARLOWE: Every faith-based organization in the state of Illinois has the full capacity and the full right to pursue their religious freedom. The question is what happens when you are paid with taxpayers’ money, state money, to provide state services? And in those cases we have to insist that those agencies comply with Illinois law. 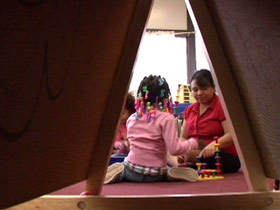 FAW: Catholic Charities of Illinois has placed thousands of children in homes over the past 50 years. Eighty percent of its foster-care budget comes from the state. Even if it loses that money, says Bob Gilligan, Catholic Charities will continue with adoption and foster care.

MARLOWE: We don’t want to see them leave this work. But if that is what’s going to happen, the Illinois child welfare system that they helped build is more than capable of taking on this transition. There are other agencies bound by the exact same regulations that Catholic Charities is that are ready to step up and take on this work.

FAW: Gay adoptive parents like Michelle and Corynne think that history is on their side, that eventually Catholic Charities’ policy of exclusion will go the way of earlier social practices, like the 1950s when black Americans were denied public accommodations.

MASCARO: It harkens back to just say you can’t eat in this lunch counter, go eat at one down the street. We know that in every other aspect that’s not right. It’s not legal. It’s not sanctioned in this country. Why is it still allowed or could it be allowed in adoption? This is an abuse of what they perceive as their religious freedom.

WOLF: There were agencies 30 years ago, 20 years ago, that didn’t want to place children in homes of interracial couples. I mean, the world is changing.

FAW: So the issue in Illinois, now focused on gay couples, comes down to this: when anti-discrimination laws and church doctrine clash, which should prevail?

GILLIGAN: This is an emerging conflict in our society. As you enact antidiscrimination laws, to what degree does a religious institution have to comply with it? We do a lot of things in the public square. Is the Catholic Church in compliance with all the rules and policies and laws of the state if we won’t do certain things against our conscience? It’s a good question.

FAW: And as the definition of the modern family continues to change, will church doctrine also have to change?

For Religion & Ethics NewsWeekly, this is Bob Faw in Chicago.