RICHARD ROHR: There’s no place where you can’t pray.

ROHR: I love beautiful spaces. But if creating beautiful spaces like this for one moment leads you to think that God is not equally out there on the streets of Portland, then religion is not doing its job.

VALENTE: For the past 25 years, Rohr, a Franciscan [priest], has run the Center for Action and Contemplation in Albuquerque. He calls himself a “radical traditionalist.” For example:

ROHR: It’s not correct to say Jesus is God. Now, don’t run and report me to the bishop, all right? It’s not correct to say that — Jesus is the union of the human and the divine. That’s different. I’ve been a priest 43 years. Most of the Catholics Christians I’ve met would for all practical purposes believe Jesus is God only, and we are human only. We missed the big point. The point is the integration, both in Jesus and ourselves.

VALENTE: Such provocative ideas make him an enigma to some, and a modern day prophet to others. Richard Rohr is one of the most popular spirituality authors and speakers in the world. His ideas appeal to people across faith traditions, and to spiritual seekers as well. Rohr argues that most organized religions dispense doctrine when they should be encouraging personal transformation. 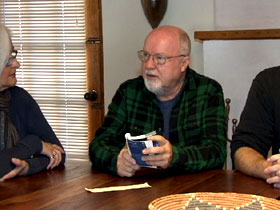 ROHR: Without transformation, you can assume you’re at a high moral, spiritual level just because you call yourself Lutheran or Methodist or Catholic. I think my great disappointment as a priest has been to see how little actual spiritual curiosity there is in so many people.

VALENTE: Rohr’s popularity may be surprising since his ideas are highly nuanced and draw deeply from mythology, philosophy and psychology. He’s lectured across the globe. And his books have been translated into numerous languages. His latest book is called “Falling Upward,” and addresses the importance of the spiritual journey.

ROHR: It feels like falling but it isn’t falling, it’s learning. It’s transcending.

VALENTE: In what he calls the first half of life, Rohr says we’re mostly concerned with everyday interests: building our self-image.

ROHR: Our culture is made to order for that. Defining the self almost entirely by external achievements, by external appearance, by skin color, by the car you drive, where you live, and so forth. You know, that… all great spiritual traditions will call that illusion. Illusion. Foolishness. There’s a further journey. There’s something more than, you know, accumulating more money in the stock market.

VALENTE: But in the second part of life, the spiritual part, we are more likely to see meaning in the losses, disappointments and failures we have suffered. It is not necessarily a chronological period. It can occur at any age, but is always characterized by a greater ability to appreciate mystery and paradox. 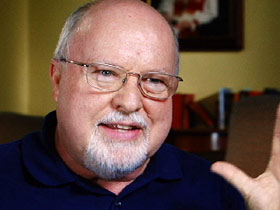 ROHR: It’s the holding of tensions, of ambiguity, of pain, if you will, that in fact teaches us wisdom. There’s an increased capacity for compassion, forgiveness, love.

VALENTE: He calls himself a loyal Catholic, but maintains too many churches emphasize teaching, which can leave us stranded in a “religious comfort zone.”

VALENTE: Rohr says that there is such a thing as absolute truth, and that religious doctrine has its place. But he maintains that a rigid adherence to doctrine is sometimes part of the problem.

ROHR: Without honest self-knowledge religion ends up, I’m going to say it, being more a part of the problem than the solution. I mean, we’ve seen it now for centuries, that people who call themselves Christian can be utterly racist, utterly sexist, utterly greedy, no questions asked. This is the kind of religion we end up with when you don’t do your shadowboxing.

VALENTE: Shadowboxing, to Rohr, means taking a hard look at our flaws, our weaknesses and biases. It’s an important first step, Rohr says, toward uncovering what he calls “the true self.” 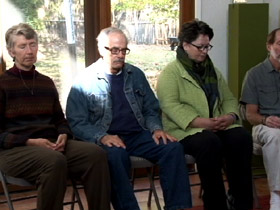 ROHR: The spiritual life is very much a matter of cleaning the lens, clarifying how you see. So the shadow is what you don’t want to see. Shadowboxing never stops, that you keep seeing the parts of yourself that are paranoid, angry, defensive, accusatory, fearful, attacking.

VALENTE: Rohr calls solitude “a cure for loneliness” and describes it as an essential element for living a more contemplative — and compassionate — life.

ROHR: Whenever you have a return to solitude and silence, you know that there’s been a rediscovery of the contemplative mind. I think we should close down every pastoral program in a diocese and just teach our people how to pray. It’s the built-in therapy to let go of your addiction to yourself and to your repetitive obsessive thoughts, which just screws up just about everything.

Without the contemplative mind, which at this point in history we have to be taught, you simply don’t have the wherewithal to deal with great spiritual truths.

VALENTE: According to Rohr, our society has plenty of elderly people, but lacks true “elders.”

ROHR: Elder is a capacity of soul that allows you to patiently understand things, and again I’m going to repeat our word for that is wisdom. It is not chronological maturity. It’s how you’ve dealt with the dark side and how successfully you’ve dealt with disappointment, betrayal, abandonment, failure, and rejection. 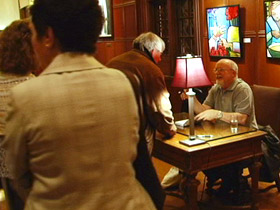 VALENTE: Do you think that the spiritual journey only begins in earnest when we hit rock bottom?

ROHR: Only at that point which they call powerlessness do you learn to draw upon a bigger source. There’s no other reason you will. And that’s what I would call the spiritual journey. Up to that point, and I don’t mean this in a negative way, but up to that point it’s largely religion. Religion isn’t bad, but until religion becomes actual spiritual experience, it is just religion.

I think of the Catholic parents who’ve demanded that their kids go to Mass every Sunday, but then they’re sitting there themselves bored to death and hate every minute of it and walk out early and, I mean, the kids knows by three, “This is not a good thing to go to Mass,” you know?

VALENTE: The things he sometimes says have, so far, not gotten him into trouble with the official church.

ROHR: You can’t just have Catholic truth, Methodist truth, Buddhist truth. If it’s true, it’s always true, and that’s what we mean by the perennial tradition. This desire to find the big patterns that are always true. I think that’s been my desire and right on the heels of that has been my equal desire to show that Christianity has always taught those truths. So in that sense I’m very traditional Catholic, even though I often say it in different ways that make people think I’m not.

VALENTE: He maintains he’s neither a skeptic, nor a rebel. He speaks of faith and mystery this way:

ROHR: I love to define mystery as not that which is unknowable, but that which is endlessly knowable. So you never get to the point where I know it all. And wouldn’t we assume that would be the nature of God? That God will always by definition be mystery. More knowability, more knowability, deeper experience, deeper surrender. So that’s the meaning of faith, and why faith has such power, not just to transform people but to keep them on an ongoing path of transformation and growth.

VALENTE: To take that path, Rohr says, is to choose a life of growth, over spiritual stagnation.