JUDY VALENTE, correspondent: These parishioners at St. Edna’s Church in suburban Chicago got a crash course on the changes in the Catholic Mass.

CREPEAU: I don’t want you to think of this as, “Oh great, come Advent I’m going to walk into church and the communion rail’s going to be back and ladies are going to have to wear Kleenex on their head and oh me, oh my.” That is not what is happening here.

VALENTE: What has happened is that the words to some of the prayers and music these people have known for the past 40 years have changed. It’s the most significant retooling of the Mass since 1973, when it went from Latin to English. 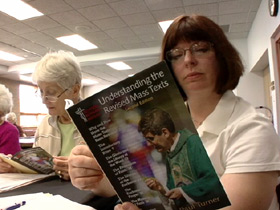 VALENTE: The Vatican says the Mass is now more authentic, more accurately reflecting the meaning of the original Latin.

ARCHDIOCESAN DVD: Will the changing of this frequently used dialogue be easy? Certainly not.

VALENTE: Some of the changes don’t fall trippingly off the tongue. In the Creed, for example, the part about Jesus being one with the Father becomes “consubstantial with the Father.”

CREPEAU: It is a $50 word. Now imagine a third-grader trying to do this, because third grade is where they teach the creed. 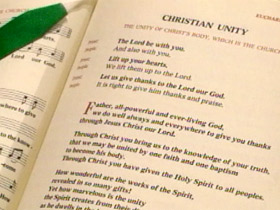 VALENTE: “And also with you” becomes “and with your spirit.” Other changes are more extensive.

ARCHDIOCESAN DVD: Indeed, as you can see, the entire hymn is reimagined and restructured…

VALENTE: For priests, the Mass becomes quite different.

ARCHDIOCESAN DVD: The new translations of the Roman Missal involve a new way of speaking for the priest at Mass.

VALENTE: But many priests are not happy with the changes. They’ve criticized the new translation as archaic, ugly — even wrong.

VALENTE: Father Larry Janowski is a Franciscan priest in the Chicago diocese who objects to the literal translation of words from the original Latin.

JANOWSKI: From what I’ve seen they’re like sawdust in the mouth. They’re difficult to say.

VALENTE: For example, this prayer: 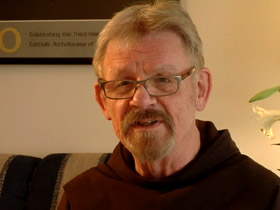 JANOWSKI: (reading) “Therefore, Lord, we pray, graciously accept this oblation of our service, that of your whole family, which we make to you also for those to whom you have been pleased to give the new birth of water and the Holy Spirit, granting them forgiveness of all their sins. Order our days in your peace and commend that we be delivered from eternal damnation and counted among the flock of those you have chosen.” That’s quite a mouthful.

VALENTE: Janowski was so concerned that he wrote a letter to Chicago’s Cardinal Francis George, which said in part:

JANOWSKI: (reading from letter) English has the greatest vocabulary of any living language on earth, yet the prescription is that we not only adhere to a stiff, ugly, nonvernacular translation, but actually delights in convoluted sentence structure and anachronistic language, and then calls it reverence.

VALENTE: The retranslation process began in the 1980s with a group of theologians working in concert with linguists, writers, even poets. But the Vatican rejected that translation and instead decided to rewrite the entire Roman Missal or prayer book, of which the Mass is only a part.

REV. EDWARD FOLEY: Then, in 2000, Pope John Paul II announced there would be a new missal, and if there was going to be a new missal you had to start the entire translation process all over again. So it began again. 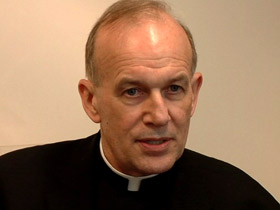 VALENTE: Father Edward Foley is a professor of liturgy and music.

FOLEY: I think the most problematic part of the whole thing has been the process. I think it was much more secretive than the previous translation process. We knew who the translators were in the previous process. Here, we did not.

VALENTE: In an open letter to the US bishops, Father Anthony Ruff, a liturgist who had been heavily involved in the new translation, refused to promote it, saying “The Holy See allowed a small group to hijack the translation at the final stage, how unsatisfactory the final text is….how much deception and mischief have marked this process—and then when I think of our Lord’s teachings on service and love and unity…I weep.”

Eucharistic Prayer: “When supper was ended, he took the cup…”

VALENTE: The consecration is the holiest part of the Mass. Even a small change here—from the word “all” to the word “many”—has proven controversial.

Eucharistic Prayer: “He gave the cup to his disciples and said, take this all of you and drink from it. This is the cup of my blood, the blood of the new and everlasting covenant. It will be shed for you and for all so that sins may be forgiven.” 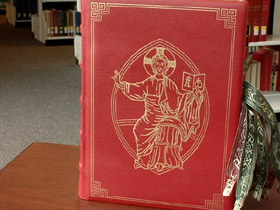 JANOWSKI: Our understanding of the sacrifice of Christ in the world today is that it is for all people, and to say “for many” is a very difficult thing for a priest to even get out. I know priests who say it violates their conscience to say that.

THERESA WATKINS (Parishioner): Change is always hard. So I think there will be some pushback from some people, especially because we’ve been doing it for so long.

ERNIE KEMNETZ (Parishioner): I lived through Vatican II and all of that change, and that was something else, and like she was saying, there were a number of pastors who were not fully involved. They fought it.

VALENTE: Despite the controversy, the Mass remains the heart of their faith to most Catholics.

CREPEAU: Remember, the Eucharist is who we are. It is everything that we do. It’s the center of what we are, and everything else comes out from that.

FOLEY: The Roman Catholic Church is not a democracy, and we do have a pope and we do have bishops, and they are the arbiters. The Mass does not belong to me. The liturgy belongs to, the Mass belongs to the church, and I have been called to be an official representative of the church, and it’s not for me to change. It’s for me to do it as effectively and as well as possible.

VALENTE: In a statement, the US bishops said there is “an openness and readiness to receive the new text.” Some priests clearly aren’t ready yet.

JANOWSKI: At some point, I will be required to teach the congregation about what is coming, and I cannot lie to the people. I cannot pretend to be enthusiastic about a translation that I don’t believe in. I will say what needs to be said, but I will have to say to those people whom I love that my heart isn’t in it, and I dread saying that.

VALENTE: But for now, it seems, Catholics will have to learn to live with the changes, whether they like them or not.

For Religion & Ethics NewsWeekly, this is Judy Valente in Chicago.