BOB FAW, correspondent: Question: What do this longtime alcoholic, this up and coming project manager, this receptionist who was homeless, and Noah Haynes, who just turned one, have in common? Answer: The chance at a better life because of this former corporate high-flyer and mother of four.

NANCY MURRAY (Builders of Hope): We’re building houses. We’re rescuing houses that are slated for demolition, rebuilding them and making them available and affordable to families who otherwise would be living in pretty substandard conditions.

FAW: For the past five years, her program, Builders of Hope, has found houses about to be demolished and put in a landfill.

MURRAY: So far, to date Builders of Hope has rescued eleven million pounds of debris from the landfill. The only inventory that we work with is inventory slated for demolition. I’d say 99 percent of the homes that are donated that are older have hardwood floors in them. We’re able to restore those. The roofs, the rafter systems, the floor systems—all in really great shape and very usable. 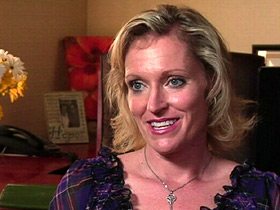 FAW: Nancy Murray’s nonprofit group rescues houses from commercial, road and hospital expansion as well as private donors who want to build larger homes. The houses are rebuilt and refurbished into energy-efficient green houses, as Josh Thompson learned when he moved into his Builders of Hope home.

JOSH THOMPSON: All the paints that they use are all low-chemical and designed to kind of produce a healthy environment.

FAW: Now that’s what we see. What we don’t see—tell me about the insulation.

THOMPSON: Yeah. What you don’t see is spray-on foam insulation across the whole house—amazing energy efficiency with that. You got all these windows are the double-paned.

FAW: In Raleigh, Durham, Charlotte, and other North Carolina cities, Nancy Murray’s Builders of Hope, with help from private and government funds, has restored nearly 100 houses, selling them at an average cost of $135,000. Putting them on land she has bought or that has been donated, Murray sells them at cost to low- and moderate-income wage-earners she calls the working poor. 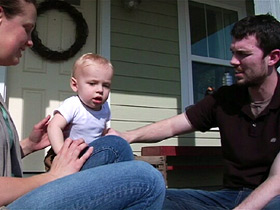 ROBBIE HAYNES: There’s houses like this in the downtown area, but it’s just not with our price range. We couldn’t afford to have those upgrades and different things.

FAW: New home owners like receptionist Nikki McKinnon who also could not afford to buy much of anything on her $25,000 a year salary.

NIKKI MCKINNON: Just having your own—it’s nothing like it. It gives you just a sense of pride and worth. It’s just wonderful just to say that I actually own a piece of land in this world, you know. It’s nice.

FAW: Nancy Murray gave up her job as a marketing and advertising executive to start Builders of Hope with money she inherited from her father and with the knowledge of one of his businesses—construction.

MURRAY: We were building million-dollar vacation town homes, and we were displacing people when we bought property that were renting. We would tear them down and build something else, and I thought, wow, what we’re doing is wrong. You know, I started getting a conscience, like this is terrible.

FAW: So she traded in her stilettos for steel-tipped boots, even bought her own earth-mover. It is, she says, a kind of ministry. 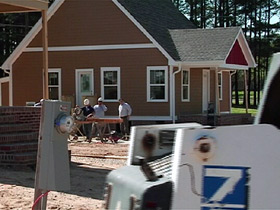 MURRAY: There’s a verse in Matthew that states that you shouldn’t store your money up, you know, where moths and rust and decay set in, but to take that money and invest it in Kingdom work and to really be able to use it to make a difference in loving others and caring for others while we’re here on earth.

FAW: With a staff of 60, her Builders of Hope scours a 60-mile radius looking for houses, some donated by homeowners like attorney Bryan Brice, who get a handsome tax write-off and satisfaction.

BRYAN BRICE: This is reuse and recycle and and hope in a way that is affording home ownership to lower- and middle-income families, and if you look at this whole neighborhood it’s just amazing what they’re doing here to rebuild this area. We’re glad to be a part of it.

FAW: But there is more here being rebuilt than houses. Once, this neighborhood was crime-infested.

MURRAY: Gang members were giving some problems to some of our first homeowners here, actually. This was gang territory.

MURRAY: That demonstrates that revitalization really does work.

FAW: Her Builders of Hope also refurbishes and rebuilds rental units. That restoration and the rebuilding of the houses is performed in part through a mentoring and training program established by Murray. Her organization hires hard-to-employ men who’ve had prison records or substance abuse problems, like the long-term alcoholic Kennie Byrum. 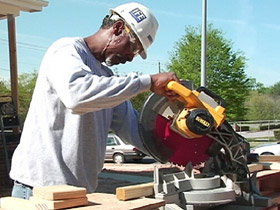 KENNIE BYNUM: I could see that they cared about not only just me, not focusing on let’s stop what we’re doing and care about Kennie, but let’s bring Kennie along and show him that he can be part of something that deals with caring about others. It’s a fellowship that I’ve never witnessed before or been part of before.

FAW: So lives are also being transformed here as well as houses. Phillip Brickle, once a longtime drug addict who became a pastor, now owns one of Nancy Murray’s houses.

FAW: What’s it do to someone like that? Do they change because they now can live in a home like this?

FAW: Juggling house moving schedules with city zoning permits, among other issues, is a true test of Nancy’s faith.

NANCY MURRAY: I would get mad at God, you know. It was like, okay, you brought me here, you convinced me to do this, you know, this project is about to fall apart. Everything is going to go by the wayside. 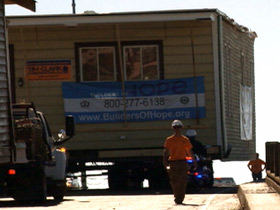 FAW: Finally, she says she put her fate in God’s hands to guide her to make the right decisions. It was then, she says, Builders of Hope took off.

MURRAY: You’re saying, okay, we’re here for a reason. Why are we here? What do I need to learn? What people are going to interface with me because we’re in the midst of this problem that maybe because I’ve met them something else is going to happen? So you trust that everything happens for a reason, and it’s all connected, and ultimately gets you to the place where God wants you to be.

FAW: In addition to the projects in North Carolina, Nancy’s Builders of Hope moved, refurbished, and relocated 76 homes in New Orleans that were about to be demolished to make room for a new hospital. It’s estimated about 250,000 houses a year in the United States get torn down. Cities like Detroit and Dallas have contacted Nancy about her work.

MURRAY: This is a model that can replicate, and then it does have very important ramifications, I think, nationally in terms of being able to rebuild neighborhoods and to get people back in housing, but we do need funding. We need supporters.

FAW: With the constant fundraising it is a struggle, but the satisfaction, she says, is worth all the uncertainty and aggravation.

MURRAY: You move them in over there, and the eyes and the excitement and the warmth and the pride—it’s just so sweet to see that when you do give them an opportunity and you give them a chance and something beautiful that they deserve, they take care of it and they blossom and they grow, and they really create a new community for themselves.

FAW: Here, where because of one woman’s faith a house is not just a home, it’s a new beginning.

For Religion & Ethics NewsWeekly, this is Bob Faw in Raleigh, North Carolina.