PASTOR JOSEPH TOLTON (preaching at memorial service): “David’s murder was meant to cause all of us who support human rights to live in fear…”

FRED DE SAM LAZARO, correspondent: David Kato was memorialized recently on the anniversary of his death, a small service led by a minister visiting from New York. Kato’s advocacy of gay rights in a land where homosexuality is deeply taboo made him a target for a tabloid called Rolling Stone. It published the names of what it called the country’s “top homos.”  Under a banner headline and the words “Hang Them” was Kato’s photograph. A few days later, he was beaten to death. Advocates say it was only the most publicized incident in an atmosphere of growing hostility—socially and legally—toward gays.

TOLTON (preaching at memorial service): “You Ugandans are people of courage. You are people of honor and people of determination, and you are defying the odds because you are taking a stand that we will not be crushed by the Bahati bill.”

DE SAM LAZARO: The Bahati bill, named after its author, David Bahati, in Uganda’s parliament, was introduced in 2009 and reintroduced earlier this month. It would add severe penalties for homosexuality, which is already illegal under so called sodomy laws passed during British colonial times. 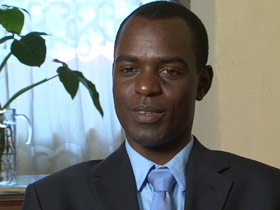 FRANK MUGISHA: I could be put in jail for life for not doing anything but for saying I am a homosexual and for being out.

PASTOR SCOTT LIVELY (speaking on video): “What has caused these people to end up in this condition that God condemns, that is hurting them and that we want to help them to overcome?”

DE SAM LAZARO: Videos posted on the Internet show Lively conducting seminars here decrying a global homosexual agenda, insisting that homosexuality is a learned behavior that can be unlearned, and that he’d helped many people do so. Lively denies he ever called for violence, but in a deeply religious country, Mugisha says such messages affirm local clergy and policymakers.

DE SAM LAZARO: Reaction on the streets was strongly in favor of the anti-homosexuality bill. Polls have shown that 95 percent of Ugandans favor criminalizing homosexuality. 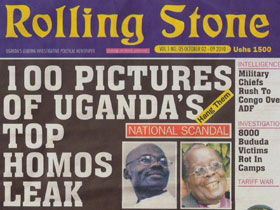 Man on street: I have a verse in the Bible, in Leviticus 20, verse 13. It says homosexuals should be put to death.

DE SAM LAZARO: When first introduced, Uganda’s anti-homosexuality bill did call for the death penalty in certain cases. It provoked an international outcry among donor nations. A large part of Uganda’s budget comes from foreign aid. The measure was shelved until what some people here call a new provocation late last year.

US Secretary of State HILLARY CLINTON (in speech): Like being a woman, like being a racial, religious, tribal, or ethnic minority, being LGBT does not make you less human, and that is why gay rights are human rights, and human rights are gay rights.

DE SAM LAZARO: Clinton told this gathering of diplomats in Geneva that the US was placing the rights of lesbians, gays, bisexuals, and transgendered people at the heart of its human rights agenda and tying it to aid decisions.

CLINTON (in speech): The president has directed all US government agencies engaged overseas to combat the criminalization of LGBT status and conduct, to enhance efforts to protect vulnerable LGBT refugees and asylum seekers, to ensure that our foreign assistance promotes the protection of LGBT rights.

PASTOR JOSEPH SERWADDA: When Secretary of State Hillary Clinton declared that gay rights were human rights, our response was this is going to be very tough on Africa, because most African nations consider gayism… 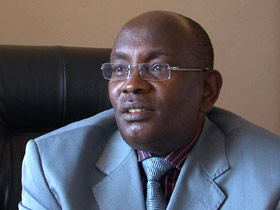 SERWADDA:  …gayism as a behavior, not as a culture, not as a faith, and definitely not as a way of life.

DE SAM LAZARO: Pastor Joseph Serwadda, who heads an association of Pentecostal and evangelical churches, says Western countries are imposing their values and agenda on sub-Saharan Africa. As proof he noted that the head of mission at the US embassy here attended the funeral of gay activist David Kato.

SERWADDA: Many people, thousands of them, die of HIV/AIDS, of other illnesses and ailments. Many people die in road accidents, and we’ve never seen an ambassador show up at a graveside.

DE SAM LAZARO: Could it be that his picture was on the front page of a magazine that said, “Hang Them”?

SERWADDA: Could also be because America has an agenda for homosexuals in Uganda.

DE SAM LAZARO: Like police and prosecutors in the Kato murder case, he says robbery or a soured business deal could well have been the motivation, not homophobia. Pastor Serwadda isn’t sure he’s ever met a gay person in Uganda and that, he says, is proof that homosexuality was never an issue here until gays in the West began stoking it—encouraging Ugandans to push for special rights and protections he says they don’t need. 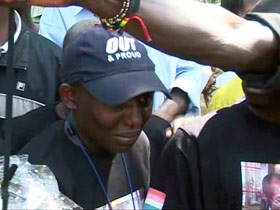 DE SAM LAZARO: Wow. That’s contrary to what we hear.

SERWADDA: You’ve just come in the country a couple of weeks ago. We live here. I’ve lived here for more than 50 years, so I know.

SERWADDA: Only one, and I wasn’t sure he was.

DE SAM LAZARO: But you know that they’re not harassed.

DE SAM LAZARO: He says the Obama administration is pushing gay rights now to court the gay vote in the US election. We tried to talk to US officials for this report, but our request to interview the ambassador or any other spokesperson for the US embassy in Uganda was turned down. It’s an indication of how delicate the issue of gay rights is in this country. Meanwhile, the anti-homosexuality legislation—with the death penalty clause removed—is working its way through a weeks-long hearing process. It will be closely watched around the world. In Washington, that will include the Robert F. Kennedy Center for Justice and Human Rights. Last year, it awarded its annual prize to Frank Mugisha.

US Senator John Kerry at RFK Center event: “Robert Kennedy would have been amazed by your work, Frank.” 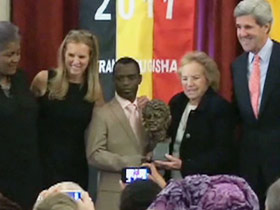 DE SAM LAZARO: It’s the first time the award has ever been given to a gay rights campaigner. Mugisha says the prize and the notoriety are a mixed blessing. It bestows international legitimacy and may allow him access to policymakers. Still, with emotions running high, Mugisha says he lives in almost constant fear for his physical safety.

MUGISHA: I’m not scared of the government. I keep saying that. Because if the government really wanted to harm me they would do that. But I’m scared of the ordinary people. Just recently when someone wrote in the newspaper about me, and if you went and read, there were Facebook comments on that, and if you read the comments there were people who were saying they could kill me if they saw me.

MUGISHA: Yeah, on Facebook, comments on the monitor, and there were who people were saying all kinds of horrible things, so you just imagine. And I interact with people, you know, and people tell you horrible things right to your face.

DE SAM LAZARO: Mugisha says he is bracing himself for the renewed public debate as hearings are scheduled for the anti-homosexuality legislation.

For Religion & Ethics Newsweekly, this is Fred de Sam Lazaro in Kampala, Uganda.