TERESA CLEMENTS, RN: Who or what helps you when you face serious challenges in your life?

CURTIS NELSON: I always get comfort from Audrey, my wife.

CURTIS NELSON: Yes, of 61 years, yes. And then our pastors.

CLEMENTS: So your faith is important?

LUCKY SEVERSON, correspondent: Conversations like this at Gundersen Lutheran Hospital in La Crosse, Wisconsin, are what set off the nationwide outcry over the so-called “death panels.” This is Curtis Nelson, connected to a dialysis machine, with his wife Audrey and his son Dennis. Teresa Clements is a nurse guiding the discussion.

CLEMENTS: With your particular illnesses, and you’ve got the multiple myeloma, the heart failure, and now the kidney disease, it’s difficult to predict when a complication can occur, and it can happen suddenly, and you might not be able or aware to make those decisions. 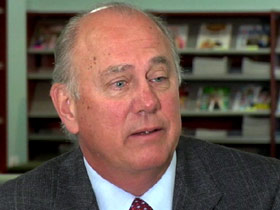 SEVERSON: These end-of-life conversations began in the 1980s at the urging of the hospital’s medical ethicist, Bernard Hammes. He had grown alarmed after listening to staff doctors distressed about how to treat incapacitated terminally ill patients.

BERNARD HAMMES (Clinical Ethicist, Gundersen Lutheran Health System): What does the patient want me to do? The patient now is too sick to ask, the family, when we ask the family, had no idea what the patient would or would not want, and so we were really faced with this moral or ethical dilemma.

SEVERSON: And when the doctors don’t know what the patient or the family wants, Hammes says there’s only one thing to do.

HAMMES: Here, anywhere in the world quite honestly, when you have a patient coming into a hospital who’s very ill, maybe dying if we don’t treat them, our assumption is that treating, attempting to prolong life is the right thing to do. And that, indeed, from an ethical, professional perspective is the right thing to do, but is it what the patient would want?

CLEMENTS: You have a serious complication from your kidney disease, you have a good chance of living through the complication, but it’s expected you will never be able to either walk or talk or both, and you would require 24-hour nursing care. You would choose the following: to continue all treatment because living as long as possible is most important; you would stop all efforts, including dialysis to keep you alive because your quality of life is more important than your quantity; or you are not sure. 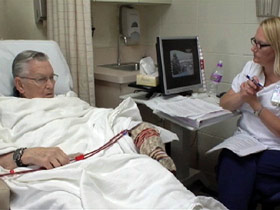 NELSON: That would be terrible. I wouldn’t want to have that.

CLEMENTS: So to stop all efforts then.

NELSON: Yes, if I got into a position like that, yes.

SEVERSON: In La Crosse, Wisconsin, 96 percent of the patients who die have gone through these advance directive discussions and designated how they would prefer to spend their last days.

HAMMES (lecturing): This program is not trying to talk people out of treatment. This program is trying to help patients make informed decisions so that we know what they would want even in a crisis, and we can deliver the services that match their preferences.

SEVERSON: The program has been so successful representatives from around the country now attend seminars at Gundersen Lutheran. The success is due, in part, to the backing of the Catholic and Lutheran churches. A similar program is underway in Minneapolis-St. Paul, which is supported by the head of the National Association of Evangelicals, Pastor Leith Anderson of the Wooddale Church outside Minneapolis. He says he witnessed too many families going through emotional turmoil when their loved one was dying. 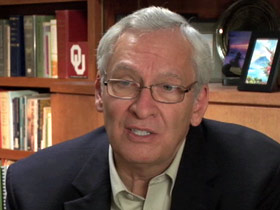 SEVERSON: Pastor Anderson says both he and his wife have filled out advance directives, and he’s encouraged members of his congregation to do the same. The directives, he says, are biblically based, and he uses as an example the story of Jacob when he knows he is about to die.

ANDERSON: And it tells about him bringing all of his sons around him, and he gave a prepared statement to every one of them, and it was different for each one. But the Bible line in Genesis 49 says that he gave instructions. Now that’s marvelous. Here long ago was a man who knew he was going to die and gave final instructions.

SEVERSON: Advance directives today detail individual treatment, assign power of attorney, and are available electronically. Hammes says they are not “death panels,” a description he says is “simply a lie.” He says some people choose to stay alive with any technology medical science can offer. A majority request less invasive treatments. Some, because of their religious views, are ready to meet their maker.

CLEMENTS: If those hopes don’t come true, what else would you hope for, Curtis?

NELSON: That the good Lord says I can come in.

CLEMENTS: That the Lord says you can come in? 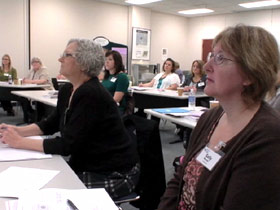 SEVERSON: The hospital now trains social workers, nurses, and pastors to conduct these discussions. Bernard Hammes has filled out his own.

HAMMES: I’m not making a judgment for you or for anyone else, but I think we live in a world in which we have to share resources. That’s a spiritual value for me. So if I receive medical care, and it reaches a certain stage, and it’s not going to change the outcome for me, but a lot more money could be spent, I would say, you know, the cost of this care has reached a point that I no longer feel is ethical, because other people don’t even have basic needs being met.

SEVERSON: Although it wasn’t the original intent of Gundersen’s advance health-care planning program, there has been an additional benefit. It saves money. Typically, hospital costs for a patient’s last 6 months of life nationwide average about $31,500. At some hospitals it’s twice that amount or more. At Gundersen Lutheran it’s $22,000 because the patient spends fewer days in the hospital.

HAMMES: Where would you rather spend your time if you had two years left to live, in the hospital going through tests and procedures? We’re putting many, many patients in this country through a lot of additional suffering and expense, some of which they’re going to have to pay for. It’s the fourth most frequent reason for families to go bankrupt. 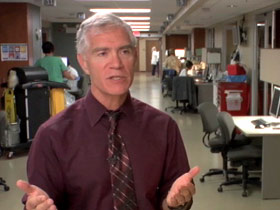 DR. JEFF THOMPSON: In our organization and others like us, a physician gets no extra money because they do a CT scan or lab work. There’s no added incentive to put patients in the hospital.

DR. GREG THOMPSON: Many of those patients who have the underlying terminal disease don’t even come to the intensive unit, because they have already decided that at this point in their life that’s not the level of care that they want. They want care, but not the critical care that they would receive in a critical care unit.

ANDERSON: I think that there’s a growing number of people who do not want to have a lot of tubes connected to them. I would say that increasingly I am hearing people say, “I want to die at home.” So they’re making a choice that dignity is more important than more days.

CLEMENTS: Any other hopes for you guys?

DENNIS NELSON: Oh, I would hope that he would get off from this, and if it is eventually going to happen, that it wouldn’t be a long, drawn out process in passing so.

CURTIS NELSON: That’s the biggest thing. I don’t want it to have it dragged out.

TERESA NELSON: So this is a good conversation to have.

SEVERSON: In these discussions, talk is about practical things but often turns deeply personal.

HAMMES: People don’t like talking about death. It’s a taboo in our society. This is a very intimate conversation. When you talk about these issues, you’re really talking, if you will, about the meaning of life, about your religious beliefs and faith, and ultimately about who you are, and that’s a little frightening to most of us.

SEVERSON: At the end of these discussions, Hammes says he often hears the same thing from the nurses and facilitators who conduct them.

HAMMES: What they will report to me is that what they experienced was a sacred space. What happens in families when they really get into the meaning of this conversation is they tell each other how important they are to each other.

SEVERSON: The idea of advance directives appears to be gaining traction. Intimate discussions about the end of life are now starting to take place in hospitals around the country.