SAUL GONZALEZ, correspondent: With Korean-American drummers leading a line of professors, a new experiment in American religious education began this fall. This was the opening of southern California’s Claremont Lincoln University, which describes itself as America’s first interreligious school of theology, one that will train pastors, rabbis, and eventually Muslim imams all on one campus. The school’s philosophy was captured in the opening remarks of Muslim-American religious scholar Najeeba Syeed-Miller, a professor at Claremont Lincoln.

PROFESSOR NAJEEBA SYEED-MILLER: The diversity of humankind is not a curse from God. It is a sign of God’s creation, and the beauty of humanity is in our very differences.

GONZALEZ: What do you hope to accomplish here at Claremont Lincoln? What’s the grand vision?

PHILIP CLAYTON (Provost, Claremont Lincoln University): You have to get beyond the point of people defining their religions by the traditional walls.

GONZALEZ: Philip Clayton is Claremont Lincoln’s provost. He sees this school as offering an alternative to traditional religious education. 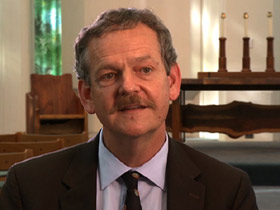 CLAYTON: When you train rabbis in one school, pastors in another, imams in another, you put them out into communities they create an “us versus them” mentality. What if we do something that’s never been done before? Let’s train them in the same classroom. Let’s let them work out their differences in their day-to-day education. When they go out into their communities you won’t find them doing the “us versus them,” but, we hope, the “we.” What that would for the face of religion in America would be staggering.

GONZALEZ: Claremont Lincoln is actually the creation of a much older institution, United Methodist-affiliated Claremont School of Theology, founded in 1885. It partnered with southern California’s Academy of Jewish Religion and the Islamic Center of Southern California to form this new school. Students attending this school can get master’s degrees in divinity, rabbinic studies, and Muslim counseling.

INSTRUCTOR: I’d like you to stand or to turn in the direction that you normally pray.

GONZALEZ: But all are required to take classes like this one that emphasize interreligious education and understanding. Many of the students feel they couldn’t get this kind of multifaith education anywhere else.

GONZALEZ: This school’s ambition to train Muslim clerics is important to Valentina Khan, a Muslim-American student of Iranian descent. 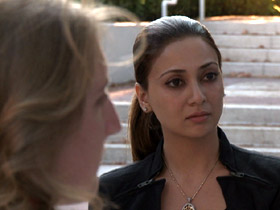 VALENTINA KHAN (Student): I definitely think that we need to have is a voice that’s an American voice as Muslims. I mean, having somebody in Saudi Arabia telling us how it should be here in America is absolutely, in my opinion, not the way I’d want to be told.

GONZALEZ: However, the creation of this school has also generated some criticism.

CLAYTON: I’m actively involved in blogging and social networking, and I began to find sites that would label what we were doing as the work of the devil, and people absolutely guaranteeing the blogosphere that I was on my way to hell, so that it really drew a hostility. People felt that we were undercutting the way they defined their entire religious tradition, which is this oppositional and exclusionary approach.

GONZALEZ: However, many of the students and faculty at Claremont Lincoln don’t want to ignore the tensions and theological differences between their faiths.

SYEED-MILLER: I actually hope that there is conflict. I often say when we get together in interfaith dialogue we try to “out-nice” each other and say, “Oh, you know, you’re wonderful!” “No, you are wonderful!” If we are truly going to be conversation partners, we need to say, “Look, this is how I view your tradition.” I think we really need to get into conversations about history, because so much of what we carry in interfaith dialogue is about the negative histories that each of our communities has had with one another, so if we are not willing to go there then I don’t think any of us are going to be able to move forward. 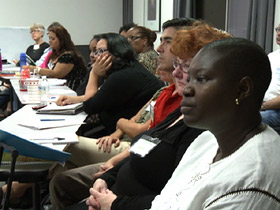 GONZALEZ: Beyond America’s changing religious landscape, there’s another reason why Claremont went multifaith: survival. Like other schools of theology and seminaries during these tough economic times, this campus faced a declining enrollment and a tightening budget. Allowing students from other faiths to train here is one way to keep the lights on and the doors open.

CLAYTON: This is an extremely hard time for American theological schools. We could go on with a dwindling number of Methodists students, but we decided we wanted to be ahead of the curve.

GONZALEZ: Well, ahead of the curve because you had to be. I mean, you had to open up this institution to other faiths to keep your head above water.

CLAYTON: Sure, but we had a 45-year history of being edgy. We were always sort of pushing the envelope, and so we decided we would push the envelope on this one.

GONZALEZ: To help it go multifaith, this school received a $50 million grant from philanthropist David Lincoln and his wife, Joan. In their honor, the school was named after them. Clayton believes to survive more and more schools of theology and seminaries will have to adopt Claremont’s interreligous approach.

CLAYTON: We’re starting to get visits from academic deans and presidents who say, “Oh, we’ve see where you’re going. Can we talk about this new movement?” 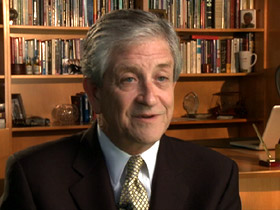 DENNIS DIRKS (Dean, Talbot School of Theology): It’s fine for Claremont. It would not be good for us.

GONZALEZ: Dennis Dirks is the dean of the Talbot School of Theology in southern California, a Christian multidenominational evangelical institution. He says religious clarity, not a mixing of faiths, is essential to a religious school, arguing a multifaith approach could weaken the curriculum and anger alumni and other campus supporters.

DIRKS: We’re frequently asked, “Do you admit non-Christians here?” They want to know. They want to hold us accountable for that, so that’s something that we want to look at very carefully.

GONZALEZ: And they want to make sure that the non-Christians are not here.

DIRKS: Well, yes, not as enrolled students, because they are fearful of diffusion of the curriculum.

GONZALEZ: But do you think it’s easy for faiths to cohabitate like that in theological instruction?

DIRKS: No, I think it’s very difficult. I think there are great challenges.

GONZALEZ: However, at Claremont they think the future is on their side in an increasingly multifaith America.