MARK PODWAL: What’s unique about this haggadah is trying to draw in as many people as possible to participate in the service. That’s why it’s called Sharing the Journey. There are wonderful explanations that are very inclusive, and so you can come to this seder not knowing anything.

Although I try to be as original as possible, I like to have some tradition not only in the concepts but in the images that were used. I wanted somehow to include the seder plate visually because it’s there in the scriptures. I also wanted to make a reference to medieval haggadahs where there were large letters that illuminated a page, and so what I decided to do was have that image with the three letters of the Hebrew word “seder” and within the samech, the first letter, I drew the seder plate. 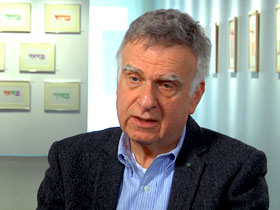 The first time the ten plagues were illustrated was in the Venice Haggadah from 1609, and I came up with just illustrating one plague, the last plague, when God slays the first-born of Egypt, and the way I depicted that was by having a wing and the mummies of the dead Egyptians on the wing.

The traditional haggadah text doesn’t even mention Moses. It’s repeatedly said that it’s God who led the children of Israel out of Egypt. It wasn’t an angel, it wasn’t an angel of fire, it wasn’t a messenger. It was God, and it’s a very beautiful passage. 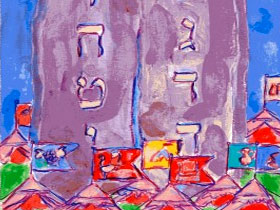 The tradition is that all the Jewish people were at Sinai for the receiving of the Torah. So there were the tents of the children of Israel, and what I did was, to identify them as such, I put the flags representing the various tribes. I drew Mount Sinai as the Ten Commandments itself. It’s also one of my favorite images.

The afikomen is part of the middle matzoh that’s hidden. It’s then needed to complete the seder, and a custom is that it’s hidden, and children go to find it, and whoever finds it will get some kind of reward. I used that image to hide the afikomen within a prayer book, within the haggadah itself, and the afikomen then serves as a bookmark.

Another image that’s in the haggadah that is a reference to a previous haggadah is for the illustrations to the song at the end of the seder, Adir Hu, “Mighty Is He God.” It says in that song, “May God rebuild his temple speedily in our days.” I drew the Torah enclosing Jerusalem, and the rebuilt temple based upon how the temple was drawn in the 1695 Amsterdam Haggadah.

These paintings were really an unexpected gift. Kafka once wrote that writing was prayer, and for me my art is prayer.