KIM LAWTON, correspondent: During Holy Week, Christians remember the familiar story of Jesus’s death and resurrection. But exactly where does that story take place? The Bible offers only a few clues.

REV. MARK MOROZOWICH (Catholic University of America): The Gospels weren’t really written to record a history. They were written to provide a testimony of faith.

LAWTON: According to the New Testament, Jesus was crucified at a spot outside Jerusalem called Golgotha, which in Aramaic means “place of the skull.” The Latin word for skull is calvaria, and in English many Christians refer to the site of the crucifixion as Calvary. The Gospel of John says there was a garden at Golgotha, and a tomb which had never been used. Since the tomb was nearby, John says, that’s where Jesus’s body was placed. The Gospel writers say the tomb was owned by a prominent rich man, Joseph of Arimathea. They describe it as cut out of rock, with a large stone that could be rolled in front of the entrance.

Father Mark Morozowich is acting dean of the School of Theology and Religious Studies at the Catholic University of America. 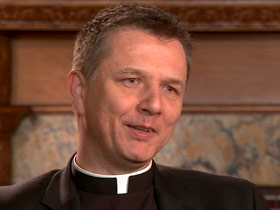 MOROZOWICH: At the time of Jesus, when he was crucified, he was not really a significant feature in Israel. I mean, certainly there was jealousy, certainly he had his followers. But there was no church that was built immediately upon his death or to mark his resurrection.

LAWTON: In the fourth century, as Emperor Constantine was consolidating the Roman Empire under Christianity, his mother, St. Helena, traveled to Jerusalem. According to tradition, she discovered relics of the cross upon which Jesus had been crucified. The spot had been venerated by early Christians, and she concluded it was Golgotha. Constantine ordered the construction of a basilica, which became known as the Church of the Holy Sepulchre.

MOROZOWICH: Now people throughout history have debated was it really there, or was it here? Traditionally in that fourth century time that was so amazing, they found this rock and this tomb not far from one another as we see even today in the church you know they’re just a short distance from one another.

LAWTON: Over the centuries, the Church of the Holy Sepulchre was destroyed, rebuilt and renovated several times. There have been numerous power struggles over who should control it, and even today, sometimes violent squabbles can break out among the several Christian denominations that share jurisdiction. But it is considered one of the holiest sites in Christianity, a massive place of pilgrimage and intense spiritual devotion. At the entrance, visitors can kiss the Stone of Unction which, according to tradition, marks the place where Jesus’ body was washed for burial. The dark chapel commemorating the crucifixion is in one upper corner, and the place marking the tomb on the other side. 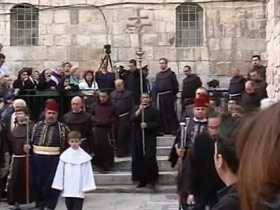 MOROZOWICH: What more of a moving place to walk in Jerusalem, the place of the crucifixion, to meditate at Golgotha where Jesus Christ died, the place where he rose from the tomb. So they are very beautiful and very moving moments when a person can have a very deep relationship with God.

LAWTON: During Holy Week in particular, the Holy Sepulchre is the center for special devotions, such as the Holy Fire ritual, where flames from inside the tomb area are passed among the candles of worshippers.

MOROZOWICH: The bishop brings out the light from the tomb and this illuminates and plays on this whole sense of the light of the world coming forth again.

LAWTON: But despite the history and devotion, some question whether that indeed is the true spot. Some Christians, including many Protestants, believe Jesus could have been crucified and buried at a different place in Jerusalem known as the Garden Tomb.

STEVE BRIDGE (Deputy Director, The Garden Tomb): The tomb was discovered in 1867. For hundreds of years before that it had lain buried under rock and rubble and earth and things had grown on top of it.

LAWTON: Steve Bridge is deputy director at the Garden Tomb, which is located just outside the Old City’s Damascus Gate. He says this site was promoted in the late nineteenth century by British General Charles Gordon, who argued that the hillside with the features of a human skull could be actual crucifixion site. 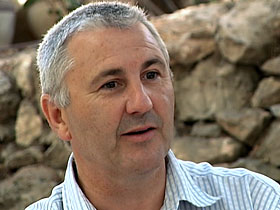 BRIDGE: When we’re looking, now we’re looking side on, and you can see maybe what looks like the two eye-sockets there on the rock face. The Bible tells us Jesus was crucified outside the city walls at a place called Golgotha, which simply means the skull, and so many people believe that Skull Hill is Golgotha, the place of the skull where Jesus died.

LAWTON: This Skull Hill looms over an ancient garden, with cisterns and a wine press, which could indicate that it was owned by a wealthy person. In the garden was a tomb, hewn from the rock.

BRIDGE: The tomb itself is at least two-thousand years old. Many date it as older than that. But it’s certainly not less than 2,000 years old. It’s a Jewish tomb, it’s definitely a rolling stone tomb. That means the entrance would be sealed by rolling a large stone across.

LAWTON: Inside the tomb is a 1300-year-old marking of a cross with the Byzantine words “Jesus Christ, the Beginning and the End.”

BRIDGE: So there’s burial space for at least two bodies, probably more. That, again, matches the bible description. It was a family tomb that Joseph had built for himself and his family. 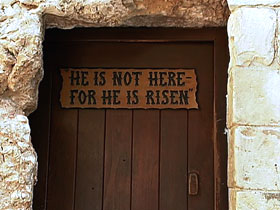 LAWTON: Bridge says Christians are deeply moved by this visual image of where Jesus may have been placed after he was taken down from the cross.

LAWTON: According to Bridge, the Garden Tomb is not trying to set up a competition with the Church of the Holy Sepulchre.

BRIDGE: There’s no doubt that historically, the Church of the Holy Sepulchre, has the evidence on its side, and we certainly wouldn’t want to do or say anything that would suggest that we think they’re wrong about the site or that we think that we’re right. What we say we have here is something that matches the Bible description.

LAWTON: And Bridge says, for him, it doesn’t ultimately matter where the actual place is.

BRIDGE: That’s very secondary to Jesus himself, who we believe he is, and why he died, and, you know, on that score us and the Holy Sepulchre would be exactly the same, telling the same story but on a different site.

LAWTON: Father Morozowich agrees that, especially at Easter time, Christians should focus more on what Jesus did, rather than on where he may have done it.

MOROZOWICH: Where he walked is very, very important. At the same time though, we know that Jesus is more than this historical figure that walked the earth, and in his resurrection, he transcends all of that. So he is as real and present in Mishawaka and in Washington, DC as he is in Jerusalem.