KIM LAWTON, correspondent: Coming to the Holocaust Memorial Museum in Washington D.C. is often a deeply emotional experience for Deborah Strobin and her older brother Ilie Wacs. Here, they relive their own memories of World War Two…memories they were reluctant to share out loud, until recently.

DEBORAH STROBIN, co-author, An Uncommon Journey: I just didn’t really want to talk about it. And neither one of us cared to just be out there.

ILIE WACS, co-author, An Uncommon Journey: No, we never really talked about it, no.

STROBIN: I mean, if someone would have told me this many years ago, I would never have thought that would happen.

LAWTON: But now, they are indeed sharing, in a new book called, “An Uncommon Journey,” which describes their family’s flight from Vienna to Shanghai and ultimately to America. Their experiences, they’ve come to realize, are part of the larger Jewish story. 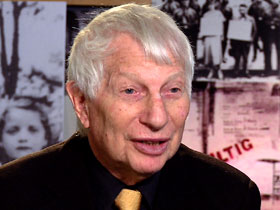 WACS: It is important to tell that story. It is on the periphery of the Holocaust, actually, what happened in Europe. However, it is still a story.

LAWTON: The story begins in Vienna. Their father, a tailor, had been a deserter from the Romanian army, so the Austrian government considered him “stateless.” In 1938, when Ilie was 11, Hilter’s Nazi army marched in, annexing Austria.

WACS: Hitler was welcomed with open arms. People threw flowers at him. It was called the war of the flowers, the blumenkrieg. And I remember to this day the troops marching for endless hours through Vienna and the tanks, the goosestepping. And the people cheering Hitler. I was very angry. I was very angry at the Austrians. How could they have changed so quickly? Overnight, within 24 hours. It was mostly anger. The fear came later.

LAWTON: Then in November 1938 came a series of attacks on Jewish-owned businesses and synagogues known as Kristallnacht or night of the broken glass. A non-Jewish friend convinced the family they needed to leave. But their father’s papers were questionable, and countries like the US had very strict entry requirements.

LAWTON: However, for many years, Shanghai had been designated a “treaty port” where foreign nationals could live and trade on Chinese soil. 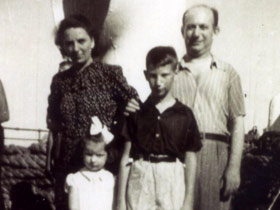 WACS: Shanghai was the only place in the entire world that had no visa requirement. Nothing. All you had to do is book passage. So, out of desperation, we had to leave. We chose Shanghai. Nobody really wanted to come to Shanghai, but it was the only place to go.

LAWTON: The Wacs family was able to secure passage on an Italian luxury liner.

WACS: The boat was called the Conte Biancamane.

STROBIN: I was told—and I don’t believe I remember that at age three but—I remember getting a sense of going on this happy vacation. But that’s all I remember basically. They were trying to protect me.

LAWTON: The family found a tiny apartment in the poorest section of the city, which was already occupied by the Japanese. Ilie, a budding artist, did sketches of their surroundings. Their father got some work as a tailor, but it was difficult to make a living.

WACS: It was a hard life in Shanghai. It was a very difficult life. Food was scarce. Our main occupation, thinking, was about food. When are we going to eat again? Nevertheless, there was a vibrant community in Shanghai, 18,000 of us. There was theater, there were newspapers.

LAWTON: Things got much more difficult after the Japanese attacked Pearl Harbor in 1941, and Asia became a major front in the war.

WACS: The Germans kept pushing the Japanese, ‘what are you doing about solving the Jewish problem?’ All the Japanese did, they put us in a ghetto. So they treated us well during the war. Sort of treated us well. They didn’t kill us, right?

LAWTON: Deborah says she didn’t really understand what was happening, or why. Ilie, on the other hand, saw it as an adventure.

STROBIN: He was always fearless.

STROBIN: I was frightened all the time.

WACS: You were frightened all the time.

STROBIN: Completely. I still am.

WACS: You still are. I was not. 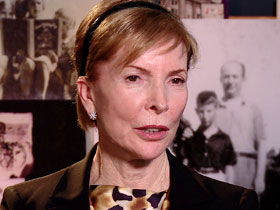 STROBIN: But, but he was fearless. I mean, I remember when the bombs came, I mean when the planes came. And we could actually tell the difference between the Japanese planes and the American planes. There was a difference. And I remember the sound of it and I remember my mother yelling we must go down in the basement. He didn’t want to move. He wasn’t finished sketching.

LAWTON: Finally in 1945, after the US bombing of Hiroshima and Nagasaki, the Japanese left Shanghai, and the Americans liberated the ghetto. Jubilation however, was short-lived. They had heard rumors that bad things were happening to Jews in Europe, but they had no idea that six million had been killed.

WACS: It was really a very difficult time. On the one hand, we were happy the war was over. And then when we found out what had happened in Europe, that none of our family had survived, most of the families had not survived, and it was quite terrible. It was quite shocking.

LAWTON: The Jewish community in Shanghai survived largely intact. The Wacs family and many others finally started making their way to America, where they began a new life. Both Ilie and Deborah eventually got married and had children. Ilie became a successful fashion designer. Deborah became a fundraiser and served as deputy chief of protocol for the City of San Francisco. They didn’t talk about what had happened in Shanghai.

Then, for his 70th birthday, Ilie wanted to visit the Holocaust Museum. Deborah reluctantly came along. And there, they saw a photo of three small children in the Shanghai ghetto. Deborah was the one on the left. 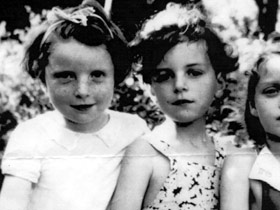 STROBIN: At first it was hard to look at the picture, to be quite honest. I mean, at first I didn’t know what I was looking at even though I know it was me, but it didn’t quite penetrate. I was concentrating more on the eyes. And I kept thinking, they look so sad. And then I realized, that was me. That sad little girl, she was actually looking back at me.

LAWTON: She remembered the day the photo was taken. The three had been playing in the park when a Japanese soldier told them to sit and smile.

STROBIN: We found out later on, obviously much later on, that there was a propaganda picture taken. They were looking for three children that were clean and didn’t look—and looked somewhat healthy. We weren’t, but we looked it.

LAWTON: Seeing that photo planted the seed to find out more about what had really happened in Shanghai. They went through their parents’ old documents, which Ilie still had stashed away. He donated the papers to the Holocaust Museum, but first, he made copies of the images and incorporated them in a series of paintings.

LAWTON: They decided to write a memoir from each of their perspectives because they felt a responsibility to bear witness to what had happened, especially for future generations.

STROBIN: Since I didn’t know anything, it didn’t seem fair for my children not to know anything either. They needed to know. My grandkids need to know.

LAWTON: Writing the book, they say, helped them to see how fortunate they were to survive. And even more than that, they say it connected them to the greater Jewish experience.

WACS: I’m not a very observant Jew, but I feel connected to the history of Judaism.

WACS: It brings you closer, yes it does.

WACS: Yes it does.