LUCKY SEVERSON, correspondent: It was only fitting that the first parachutist out of the plane at this festival for atheists and non-believers at Fort Bragg is herself an atheist—Sergeant Rachel Medley.

SERGEANT RACHEL MEDLEY: I am an atheist and I’m a good person—have, you know, a great life and have great friends, and my service to my country is based on my personal morals which are help other people, be kinds to others, treat others as you would like to be treated.

SEVERSON: She would like to be treated with more respect, as would many of the troops attending this first ever event expressly for soldiers who don’t believe in God. Sergeant Justin Griffith was one of the organizers.

SERGEANT JUSTIN GRIFFITH: This is us coming out of the closet, you know, shattering that stained glass ceiling. We want to remove the stigma about atheists and whatever they think the word “atheist” means.

SEVERSON: As unlikely as it may seem, one token of respect they would like is an atheist chaplain. That’s a tall order considering that conservative evangelical clergy dominate the ranks of the chaplaincy. Organizations like the National Association of Evangelicals, the NAE, dispute any need for an atheist chaplain. Galen Carey is an NAE vice president. 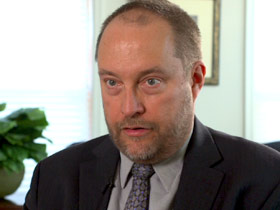 GALEN CAREY: Well, evangelicals very strongly supported the men and women in uniform, and they want to see that their spiritual needs are met. I don’t think you would find many who could understand, frankly, the point of a chaplain for atheists.

SEVERSON: There are over 3000 chaplains all together. Ninety percent are Christian, even though only about 7 out of 10 soldiers claim to be Christian. There are also a handful of Muslim, Jewish, and Hindu chaplains. Jason Torpy, an Iraq veteran, wants to know why the much larger group of atheists or humanists, estimated to be about 40,000 soldiers, don’t have their own chaplain.

SEVERSON: Torpy is a graduate of West Point. He was a captain in the 1st Armored Division and is now the president of the Military Association of Atheists and Free Thinkers. 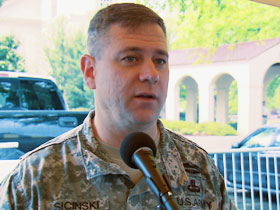 SEVERSON: Our request for an interview with the Department of Defense was declined. Instead, we were given a statement reiterating the Pentagon’s longstanding position. It reads in part, “Anyone wanting to become a chaplain must have an endorsement from a qualified religious organization.” For the Department of Defense it is a sensitive issue, with pressure building from atheist groups around the country accusing the military of promoting Christianity. But Colonel Stephen Sicinski, the Fort Bragg base commander, would deny that.

COLONEL STEPHEN SICINSKI: I don’t see there being any inequality today. I’m not tracking as to where you might think that there is inequality of treatment. We don’t treat soldiers that are atheists as atheists. We treat them as soldiers.

SEVERSON: In 2010, Colonel Sicinski, at the urging of base chaplains, approved and supported a Billy Graham Evangelistic Association event called Rock the Fort to boost morale and, in the colonel’s words, “bolster the faith.”

GRIFFITH: We were “treated” to a just massive festival, and they were actually very successful. They converted hundreds of soldiers onstage.

SEVERSON: And when Sergeant Griffith asked for a similar event for atheists and humanists, Colonel Sicinski declined at first. Months later he changed his mind, and that set the stage for this event called Rock Beyond Belief. The keynote speaker was the British biologist and famous atheist author Richard Dawkins. 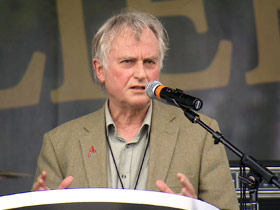 RICHARD DAWKINS: I’m delighted that a barrier has been broken through, that there never again can be a religious rally on a military base without the authorities knowing that it will be followed by something like this.

SICINSKI: This is just a manifestation, the latest manifestation of our attempt to ensure that a segment of our population gets the type of equal consideration that other types or segments of the population would.

SEVERSON: Prior to this event the military announced that there would be no base chaplains available for interviews. One chaplain wrote an open letter on Fort Bragg’s Facebook page saying the secular festival would promote and glorify violence against people who possess a faith in God. There was no violence at the Rock Beyond Belief event. Sergeant Griffith, who was a passionate Christian in his teens and now wears dog tags that say he is an atheist, claims that he’s had death threats.

GRIFFITH: I get death threats on a regular basis claiming that I‘m going to burn down the chapel, and that’s not the case at all. In fact, we want to use the churches. We want to be a part of the community.

SEVERSON: Among atheists, one of the most objectionable tests they are required to pass involves their spiritual fitness. It’s a new test given annually. Sergeant Griffith failed. 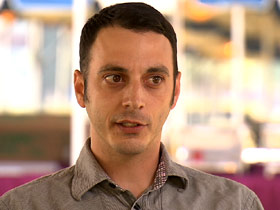 GRIFFITH: It went on and on telling me that I need to improve my spiritual fitness. But if I need help, I call this 1-800 number. So I called that 1-800 number, and I was basically just going to yell at whoever it was, and to my surprise this was a suicide hotline. I was told that I was suicidal because I was not religious.

GRIFFITH: I take this test again and again and again, because every three months since I failed a section, the spiritual portion, that means I’m red and I have to take it again in three months. It’s offensive in the highest. It’s illegal. it’s unconstitutional, it’s a waste of money, and it’s another tool to keep us down, to tell us atheists that we’re freaks or somehow unfit.

CAREY: It’s in the military’s interest as well as the individual service member’s interest that their spiritual needs are met, but I don’t think that anyone is being discriminated against in the military because of absence of having a spiritual affiliation.

SEVERSON: Jason Torpy says the discrimination is often subtle, but it’s ever-present and, he says, it’s misplaced because, he argues, atheists are making a greater sacrifice. 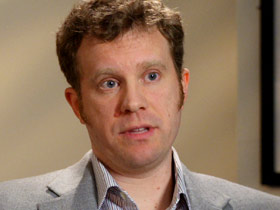 TORPY: Not only am I here serving my country, expanding the value, you know, liberty, protecting and defending Constitution against all enemies foreign and domestic. This is even more valuable because I’m giving the one life, you know, and when I die I don’t go to heaven.

DAWKINS: I must say if I were in a fox hole in the heat of battle I’d much rather be with an atheist solder than with a soldier who believed that some kind of supernatural being was watching over him. I’d want a soldier who knew that it was his own wit and bravery keeping us safe.

SEVERSON: Galen Carey with the National Association of Evangelicals says if atheists and humanists need someone to talk to, to receive counsel from, there may be another way.

SEVERSON: Atheists argue that going to a psychiatrist, for whatever reason, is often interpreted as a negative on a soldier’s record.

TORPY: Chaplains have unfettered access to troops and they have clergy confidentiality. If you go to a psychologist or a psychiatrist within the military it goes on your official record, which can jeopardize your job.

MEDLEY: It’s just like anything else. Anything that’s different or newer than other ideas is always met with a little bit of trepidation by people. That’s human nature. In the sixties we were having the same conversation about people with different colored skin, so it’s not a new conversation. It’s just a new subject.

SEVERSON: It’s a conversation that will likely go on for some time, but for those who share the goals of people here, there are signs of incremental progress in their campaign for equality with religious denominations. This festival is one sign.